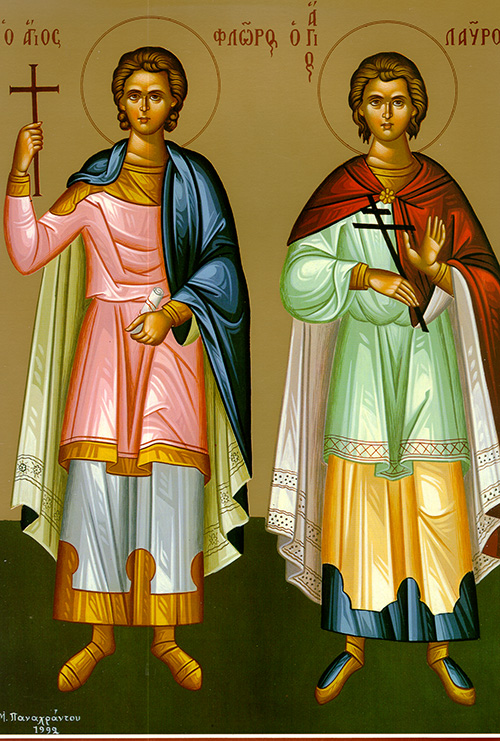 The martyrs Florus and Laurus were brothers by birth not only in flesh but in spirit. They lived in the 2nd century in Byzantium, and afterwards they settled in Illyria [now Yugoslavia]. By occupation they were stone masons. The prefect of Illyria, Likaion, sent the brothers to a nearby district for work on the construction of a pagan temple. The saints toiled at the structure, distributing to the poor the money they earned, while they kept strict fast and prayed without ceasing. When the construction of the temple was completed, the brothers gathered the Christians together, and going through the temple, they smashed the idols. In the eastern part of the temple they set up the Holy Cross. They spent all night praying, illumined with heavenly light. Having learned of this, the head of the district condemned to burning the former pagan priest Mamertin and his son and 300 Christians. Florus and Laurus were sent back to the prefect Likaion and were thrown down an empty well and covered with earth. After many years, the relics of the holy martyrs were uncovered, incorrupt, and transferred to Constantinople.

O faithful, let us praise the blessed Florus and Laurus, for they preached the Trinity without hesitation. Spilling their blood as a sign of their conviction, they have received laurels as God’s seal of approval. Pray to Christ our God to save our souls.

Today the world glorifies Florus and Laurus as holy and long-suffering martyrs for God. We hope to find grace and mercy from their prayers. We ask to be free from temptation, afflictions, anger, and pain on Judgment Day.

Brothers and sisters: Because we possess this ministry through God’s mercy, we do not give in to discouragement. Rather, we repudiate shameful, underhanded practices. We do not resort to trickery or falsify the word of God. We proclaim the truth openly and commend ourselves to every man’s conscience before God. If our gospel can be called “veiled” in any sense, it is such only for those who are headed toward destruction. Their unbelieving minds have been blinded by the god of the present age so that they do not see the splendor of the gospel showing forth the glory of Christ, the image of God. It is not ourselves we preach but Christ Jesus as Lord, and ourselves as your servants for Jesus’ sake. For God, who said, “Let light shine out of darkness,” has shone in our hearts, that we in turn might make known the glory of God shining on the face of Christ.

The Lord said to his disciples: “The man who holds out to the end is the one who will see salvation. This good news of the kingdom will be proclaimed throughout the world as a witness to all the nations. Only after that will the end come.

“When you see the abominable and destructive thing which the prophet Daniel foretold standing on the holy ground (let the reader take note!), those in Judea must flee to the mountains. If a man is on the roof terrace, he must not come down to get anything out of his house. If a man is in the field, he must not turn back to pick up his cloak. It will be hard on pregnant or nursing mothers in those days. Keep praying that you will not have to flee in winter or on a sabbath, for those days will be more filled with anguish than any from the beginning of the world until now or in all ages to come. Indeed, if the period had not been shortened, not a human being would be saved. For the sake of the chosen, however, the days will be shortened. If anyone tells you at that time, ‘Look, the Messiah is here,’ or ‘He is there,’ do not believe it. False messiahs and false prophets will appear, performing signs and wonders so great as to mislead even the chosen if that were possible. Remember, I have told you all about it beforehand; so if they tell you, ‘Look, he is in the desert,’ do not go out there; or ‘He is in the innermost rooms,’ do not believe it. As the lightning from the east flashes to the west, so will the coming of the Son of Man be. Where the carcass lies, there the vultures gather.”