Aug. 29 The Beheading of the Holy Prophet, Forerunner, and Baptist John 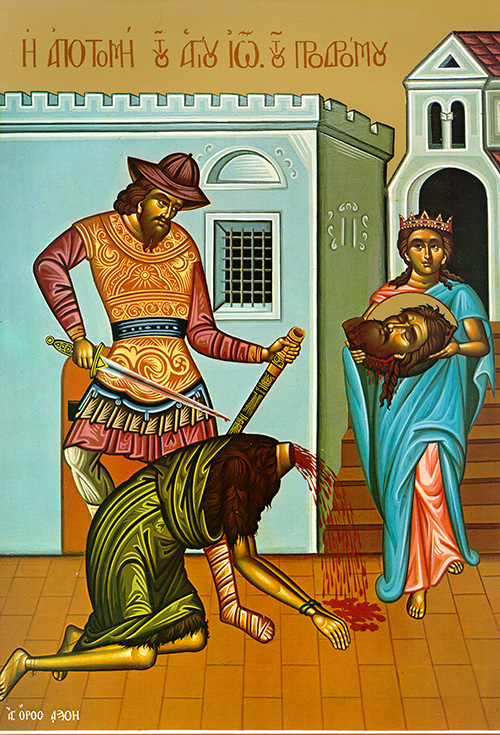 Because John had denounced Herod Antipas for putting away his own wife and marrying the wife of his brother Philip, Herod imprisoned John. At a feast held in honor of Herod’s birthday, his stepdaughter Salome danced for him. Herod promised her anything; her mother Herodias told her to ask for the head of John on a platter. This martyrdom is commemorated on this day because a church, built over the Forerunner’s tomb, was dedicated on this day to his beheading by the Emperor Constantine and his mother Helena.

The memory of the righteous is celebrated with praise, but for you, O Forerunner, the Lord’s testimony is enough. You were shown to be more honorable than the prophets since you were deemed worthy to baptize in the waters the Lord you had proclaimed. Therefore, you fought for the truth, and with joy proclaimed the good news to those in Hades, that God has appeared in the flesh to take away the sins of the world and to grant us great mercy.

The glorious beheading of the Forerunner was part of God’s saving plan that the coming of the Savior might be announced even to those in Hades. Let Herodias mourn for she sought a lawless murder because she loved neither the Law of God nor eternal life, but only this false and fleeting life.

In those days Paul spoke to the Israelites saying: “As John’s career was coming to an end, he would say, ‘What you suppose me to be I am not. Rather, look for the one who comes after me. I am not worthy to unfasten the sandals on his feet.’ My brethren, children of the family of Abraham and you others who reverence our God, it was to us that this message of salvation was sent forth. The inhabitants of Jerusalem and their rulers failed to recognize [Jesus], and in condemning him they fulfilled the words of the prophets which we read sabbath after sabbath. Even though they found no charge against him which deserved death, they begged Pilate to have him executed. Once they had thus brought about all that had been written of him, they took him down from the tree and laid him in a tomb. Yet God raised him from the dead, and for many days thereafter Jesus appeared to those who had come up with him from Galilee to Jerusalem. These are his witnesses now before the people.

“We ourselves announce to you the good news that what God promised our fathers he has fulfilled for us, their children in raising up Jesus, according to what is written in the second psalm, ‘You are my son; this day I have begotten you.’”

At that time King Herod came to hear of Jesus, for his reputation had become widespread and people were saying, “John the Baptizer has been raised from the dead; that is why such miraculous powers are at work in him.” Others were saying, “He is Elijah”; still others, “He is a prophet equal to any of the prophets.” On hearing of Jesus, Herod exclaimed, “John, whose head I had cut off, has been raised up!” Herod was the one who had ordered John arrested, chained, and imprisoned on account of Herodias, the wife of his brother Philip, who he had married. That was because John had told Herod, “It is not right for you to live with your brother’s wife.” Herodias harbored a grudge against John for this and wanted to kill him but was unable to do so. Herod feared John, knowing him to be an upright and holy man, and kept him in custody. When he heard John speak he was very much disturbed; yet he felt the attraction of his words. Herodias had her chance one day when Herod held a birthday dinner for his court circle, military officers, and the leading men of Galilee. Herodias’ own daughter came in at one point and performed a dance which delighted Herod and his guests. The king told the girl, “Ask for anything you want and I will give it to you.” He went so far as to swear to her: “I will grant you whatever you ask, even half my kingdom!” She went out and said to her mother, “What should I ask for?” The mother answered, “The head of John the Baptizer.” At that the girl hurried back to the king’s presence and made her request: “I want you to give me, at once, the head of John the Baptizer on a platter.” The king bitterly regretted the request; yet because of his oath and the presence of the guests, he did not want to refuse her. He promptly dispatched an executioner, ordering him to bring back the Baptizer’s head. The man went and beheaded John in prison. He brought in the head on a platter and gave it to the girl, and the girl gave it to her mother. Later, when his disciples heard about this, they came and carried his body away and placed it in a tomb.

Brothers and sisters: Just as you are rich in every respect, in faith and discourse in knowledge, in total concern, and in the love we bear you, so may you abound in this charity [begun among you by Titus].

I am not giving an order but simply testing your generous love against the concern which others show. You are well acquainted with the favor shown you by our Lord Jesus Christ: how for your sake he made himself poor though he was rich, so that you might become rich by his poverty. I am about to give you some advice on this matter of rich and poor. It will help you who began this good work last year, not only to carry it through, but to do so willingly. Carry it through now to a successful completion, so that your ready resolve may be matched by giving according to your means. The willingness to give should accord with one’s means, not go beyond them. The relief of others ought not to impoverish you: there should be a certain equality. Your plenty at the present time should supply their need so that their surplus may one day supply your need, with equality as a result. It is written, “He who gathered much had no excess and he who gathered little had no lack.”

At that time the Pharisees began to plot with the Herodians how they might destroy Jesus. Jesus withdrew toward the lake with his disciples. A great crowd followed him from Galilee, and an equally great multitude came to him from Judea, Jerusalem, Idumea, Transjordan, and the neighborhood of Tyre and Sidon, because they had heard what he had done. In view of their numbers, he told his disciples to have a fishing boat ready for him so that he could avoid the press of the crowd against him. Because he had cured many, all who had afflictions kept pushing toward him to touch him. Unclean spirits would catch sight of him, fling themselves down at his feet, and shout, “You are the Son of God!”, while he kept ordering them sternly not to reveal who he was.