Aug. 30 Our Holy Fathers Alexander, John, and Paul the Younger, Patriarchs of Constantinople 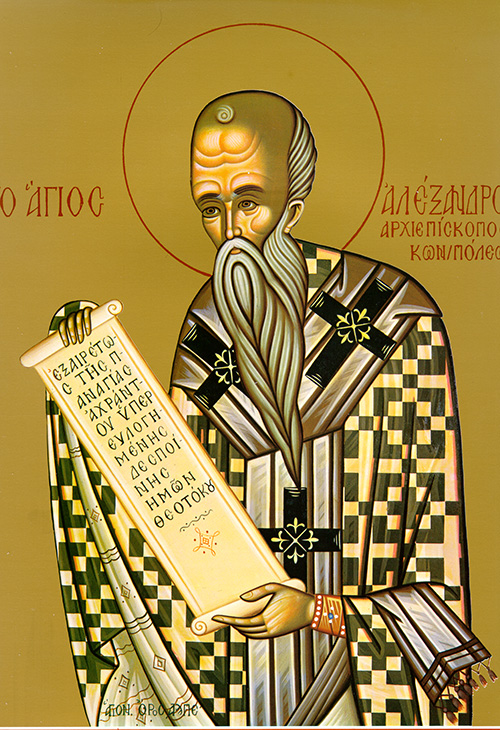 Our holy fathers Alexander, John, and Paul the Younger, patriarchs of Constantinople: Alexander took part in the First Ecumenical Council. John the Faster governed the Church in the days of the wicked emperor Anastasius. Paul IV governed the Church for five years and then took the Great Schema to repent for his early support of the Iconoclasts.

God of our fathers, You always deal with us in Your kindness. Take not Your mercy away from us; but through your prayers guide our life in peace.

These glorious saints were inflamed with love for Christ and shouldered His cross with zeal and fervor. They imitated His life and entered His glory. Standing before His throne, O Alexander, John, and Paul, pray for the salvation of our souls.

Brothers and sisters: Thanks be to God, who has put an equal zeal for you in the heart of Titus! Not only did he welcome our appeal, but being very eager he has gone to you freely. We have sent along with him that brother whom all the churches praise for his preaching of the gospel. He has been appointed our traveling companion by the churches, as we willingly carry on this work of charity for the glory of the Lord. There is one thing I wish to avoid, namely any blame over my handling of this generous collection. We are concerned not only for God’s approval but also for the good esteem of men. We have sent along that brother whose eagerness has been proved to us in many ways. He is now more eager than ever for this work because of his great trust in you. As for Titus, he is my companion and fellow worker on your behalf; our brothers too are apostles of the churches, the glory of Christ. Therefore, show these men the proof of your love, and why we boast about you, for all the churches to see.

There is really no news for me to write you about this collection for the members of the church. I already know your willingness, and boast about you to the Macedonians with respect to it, saying that Achaia has been ready since last year. Your zeal has stirred up most of them. I nonetheless send the brothers so that our claims for you in this regard may not be shown empty. I do so that you may be ready, as I have been saying you are, lest any Macedonians come with me and find you unready; then I should be put to shame – to say nothing of you – for having had this trust. I have thought it necessary to exhort the brothers to go to you and arrange in advance for the bountiful gift you have already promised. It should be ready as a gracious gift, not as an exaction.

At that time Jesus went up the mountain and summoned the men he himself had decided on, who came and joined him. He named twelve as his companions whom he would send to preach the good news; they were likewise to have the authority to expel demons. He appointed the Twelve as follows: Simon to whom he gave the name Peter; James, son of Zebedee; and John, the brother of James (he gave these two the name Boanerges, or “sons of thunder”); Andrew, Philip, Bartholomew, Matthew, Thomas, James son of Alphaeus; Thaddaeus, Simon of the Zealot Party, and Judas Iscariot, who betrayed him.

He returned to the house with them and again the crowd assembled, making it impossible for them to get any food whatever. When his family heard of this they came to take charge of him, saying, “He is out of his mind.”