Aug. 31 The Deposition of the Venerable Sash of the Theotokos 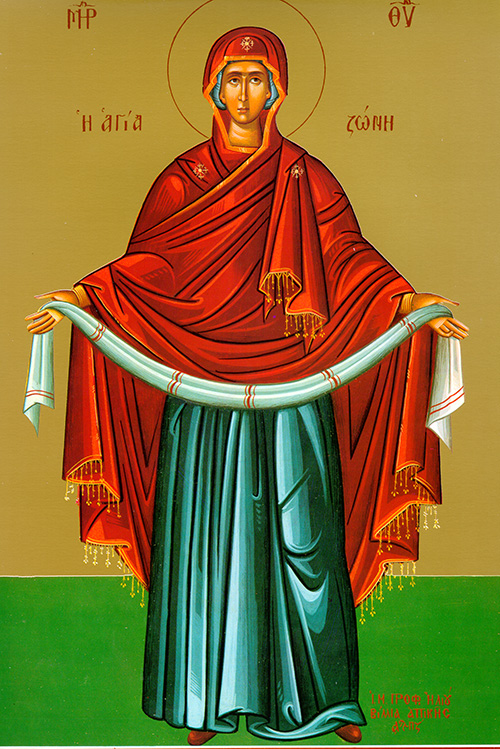 The placing of the Venerable Belt of the Most Holy Theotokos in a church of Constantinople’s Chalcoprateia district took place during the reign of the emperor Theosodius the Younger. Before this the holy relic, entrusted to the Apostle Thomas by Mary herself, was kept by pious Christians at Jerusalem after her Dormition. During the reign of the Emperor Leo the Wise (886-911), his wife Zoe was afflicted with an unclean spirit, and he prayed that God would heal her. The empress had a vision that she would be healed of her infirmity if the Belt of the Theotokos was placed upon her. The emperor then asked the Patriarch to open the coffer. The Patriarch removed the seal and opened the coffer in which the relic was kept, and the Belt of the Mother of God appeared completely whole and undamaged by time. The Patriarch placed the Belt on the sick empress, and immediately she was freed from her infirmity. They sang hymns of thanksgiving to the Most Holy Theotokos, then they placed the venerable Belt back into the coffer and resealed it. In commemoration of the miraculous occurrence and the twofold placing of the venerable Belt, the Feast of the Placing of the Venerable Belt of the Most Holy Theotokos was established in 942.

Ever-Virgin Theotokos and protection of the human race, you gave the robe and cincture of your most pure body to your city as a powerful protection. These garments remained incorrupt because of your virginal childbirth. For in you, both time and nature have been renewed. Therefore, we pray that you grant peace to the universe and great mercy to our souls.

As a mantle of immortality you have given to the faithful the garment that covered your most pure body, O Virgin whom God himself has blessed and divine protection of the human race. With love we celebrate the feast of the deposition of your mantle, and we sing with faith: Rejoice, O Virgin, for you are the pride of Christians.

Brothers and sisters: the administering of this [charity collection] not only supplies the needs of the members of the church but also overflows in much gratitude to God. Because of your praiseworthy service they are glorifying God for your obedient faith in the gospel of Christ, and for your generosity in sharing with them and with all. They pray for you longingly because of the surpassing grace God has given you. Thanks be to God for his indescribable gift!

I, Paul, exhort you be the meekness and kindness of Christ, I who (you say) when present in your midst am lowly, but when absent am bold toward you. I beg you that when I am there, I may not have to act boldly, with that assurance I might dare to use courageously against certain ones who accuse us of weak human behavior. We do indeed live in the body but we do not wage war with human resources. The weapons of our warfare are not merely human. They possess God’s power for the destruction of the strongholds. We demolish sophistries and every proud pretension that raises itself against the knowledge of God; we likewise bring every thought into captivity to make it obedient to Christ. We are ready to punish disobedience in anyone else once your own disobedience is perfect. You view things superficially. If anyone is convinced that he belongs to Christ, let him reflect on this: he may belong to Christ but just as much as we do.

At that time Jesus returned to the house with the Twelve and again the crowd assembled making it impossible for them to get any food whatever. When his family heard of this they came to take charge of him, saying, “He is out of his mind”; while the scribes who arrived from Jerusalem asserted, “He is possessed by Beelzebul,: and “He expels demons with the help of the prince of demons.” Summoning the scribes, Jesus then began to speak to them by the way of examples: “How can Satan expel Satan? If a kingdom is torn by civil strife, that kingdom cannot last. If a household is divided according to loyalties, that household will not survive. Similarly, if Satan has suffered mutiny in his ranks and is torn by dissension, he cannot endure; he is finished. No one can enter a strong man’s house and despoil his property unless he has first put him under restraint. Only then can he plunder the house.”