Sept. 01 The Beginning of the Church New Year; Our Venerable Father Simeon the Stylite and his Mother; The Synaxis of the most holy Theotokos of Miasena; The Holy Martyr Aeithalas; The Forty Holy Women martyred with their Instructor Ammon the Deacon; The Holy Martyr Callista and her two brothers, Evodius and Hermogenes; Joshua the Just, Son of Nun. 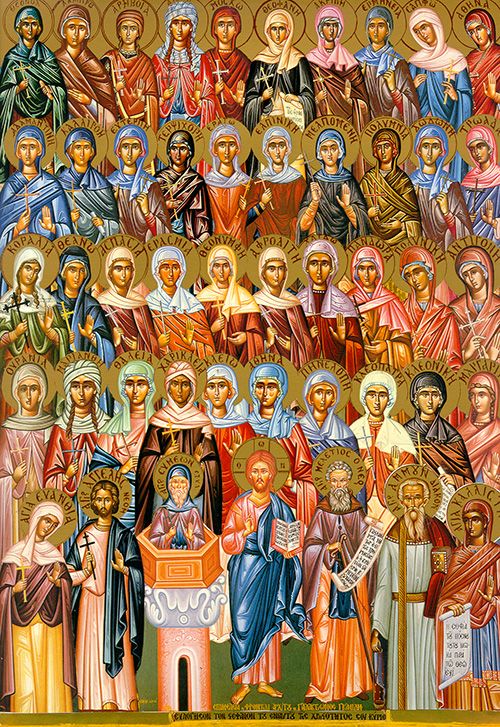 The First Ecumenical Council (325) decreed that the Church’s year should begin on September 1. The lunar month corresponding to September on the Jewish calendar was the beginning of the civil year (cf Exodus 12:2); it was at this time that our Lord Jesus went into the synagogue at Nazareth and read the words of the prophet Isaiah, “The Spirit of the Lord is upon me.. To proclaim ‘the acceptable year of the Lord.’ (Isaiah 6: 1-2, Luke 4: 16-21).

Our venerable father Simeon the Stylite and his mother: Simeon lived near Antioch in Syria. He was a monk, who lived for many years standing atop a column, hence he received the nickname “Stylite.” His life and admirable conversation were remarkable. (459)

The holy martyr Aeithalas, was a deacon, who by the order of the Persian emperor Sapor II was put to death by stoning in the year 380 for confessing for Christ.

The 40 holy women martyred with their instructor, Ammon the deacon, were martyred during the time of Licinius at Heraclea in Thrace in 313.

The holy martyr Callista and her brothers, Evodius and Hermogenes, with other Christians of Nicomedia, were brought to trial before the pagan governor for confessing their faith in Christ. Refusing to offer sacrifice to idols, they were cut down by the sword in 309.

The just Joshua, son of Nun, servant of the Lord. When the hand of Moses was placed on him, he was filled with the spirit of wisdom. He led the people of Israel after the death of Moses through the Jordan River to the promised land.

O Lord, maker of the universe, who alone has power over seasons and times, bless the year with your bounty, preserve our country in safety, and keep your people in peace. Save us through the prayers of the Theotokos.

You became a column of endurance and rivaled the forefathers, O venerable one, becoming like Job in your sufferings and like Joseph in your trials, like the bodiless angels, though you lived in the flesh. O Simeon, our father, intercede with Christ our God that He may save our souls.

Rejoice, O woman full of grace, ever-virgin Theotokos, harbor and protectress of the human race. The Savior of the universe received flesh from you, for you are the only one to be both mother and virgin, forever blessed, forever glorified. Intercede with Christ our God that He may grant peace to the whole world.

O Christ the King Who dwells on high, Creator and Maker of all that is visible and invisible, You Who made both day and night and Who have established time and years, now bless the crown of this new year. Protect and keep in peace our civil authorities, Your right-believing rulers, and Your people, O Most Merciful One.

You looked to heaven and became an angel. You made of your pillar a fiery chariot. Now that you are among the angels, join them in praying to Christ that He might save our souls, O venerable Father.

Readings for the New Year

Timothy, my son: First of all, I urge that petitions, prayers, intercessions, and thanksgiving be offered for all men, especially for kings and those in authority, that we may be able to lead undisturbed and tranquil lives in perfect piety and dignity. Prayer of this kind is good, and God our Savior is pleased with it, for he wants all men to be saved and come to know the truth. And the truth is this: “God is one. One also is the mediator between God and men, the man Christ Jesus, who gave himself as a ransom for all.” This truth was attested at the fitting time. I have been made its herald and apostle (believe me, I am not lying but speak the truth), the teacher of the nations in the true faith.

At that time Jesus came to Nazareth where he had been reared, and entering the synagogue on the sabbath as he was in the habit of doing, he stood up to do the reading. When the book of the prophet Isaiah was handed to him, he unrolled the scroll and found the passage where it is written: “The spirit of the Lord is upon me; therefore he has anointed me. He has sent me to bring glad tidings to the poor, to proclaim liberty to captives, recovery of sight to the blind and release to prisoners, to announce a year of favor from the Lord.”

Rolling up the scroll he gave it back to the assistant and sat down. All in the synagogue had their eyes fixed on Jesus. Then he began by saying to them, “Today this Scripture passage is fulfilled in your hearing.” All who were present spoke favorably of him; they marvelled at the appealing discourse which came from his lips.

Readings for the Saint

Brothers and sisters: Because you are God’s chosen ones, holy and beloved, clothe yourselves with heartfelt mercy, with kindness, humility, meekness, and patience. Bear with one another; forgive whatever grievances you have against one another. Forgive as the Lord has forgiven you. Over all these virtues put on love, which binds the rest together and makes them perfect. Christ’s peace must reign in your hearts, since as members of the one body you have been called to that peace. Dedicate yourselves to thankfulness. Let the word of Christ, rich as it is, dwell in you. In wisdom made perfect, instruct and admonish one another. Sing gratefully to God from your hearts in psalms, hymns, and inspired songs.

The Lord said to his disciples: “Everything has been given over to me by my Father. No one knows the Father but the Son–and anyone to whom the Son wishes to reveal him.

Brothers and sisters: You view things superficially. If anyone is convinced that he belongs to Christ, let him reflect on this: he may belong to Christ but just as much do we. If I find I must make a few further claims about the power the Lord has given us for your upbuilding and not for your destruction, this will not embarrass me in the least. At the same time, I do not wish to intimidate you with my letters. His letters, they say, are severe and forceful, but when he is here in person he is unimpressive and his word makes no great impact. Well, let such people give this some thought, that what we are by word, in the letters during our absence, that we mean to be in action when we are present.

We are not so bold, of course, as to classify or compare ourselves with certain people who recommend themselves. Since people like that are their own appraisers, comparing themselves with one another, they only demonstrate their ignorance. When we make claims we will not go over the mark but will stay within the bounds the God of moderation has set for us – leading us to you. We are not overreaching ourselves, as we should be doing if we had not bothered to come to you. But indeed we did get as far as you with the gospel of Christ. We do not boast immoderately of the work of others; we hope that as your faith grows our influence may also grow among you and overflow. Following the rule laid down for us, we hope to preach the gospel even beyond your borders without having to boast of work already done by another in his allotted territory. [As I said to you previously], “Let him who would boast, boast in the Lord.” It is not the man who recommends himself who is approved but the man whom the Lord recommends.

The Lord said to his disciples: “I give you my word, every sin will be forgiven mankind and all the blasphemies men utter, but whoever blasphemes against the Holy Spirit will never be forgiven. He carries the guilt of his sin without end.” He spoke thus because they had said, “He is possessed by an unclean spirit.”