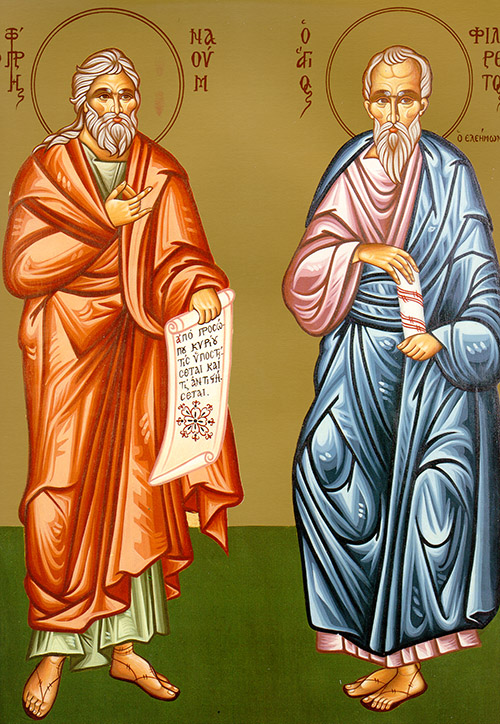 The Holy Prophet Nahum was born of the tribe of Simeon in a place called Elkosh on the far side of the Jordan. He lived about seven hundred years before Christ and prophesied the destruction of Nineveh about two hundred years after the prophet Jonah. Because of Jonah”s preaching, the Ninevites had repented, and God had spared them and not destroyed them. In time, however, they forgot God’s mercy and again became corrupt. The Prophet Nahum prophesied their destruction, and since there was no repentance, God did not spare them. The entire city was destroyed by an earthquake, flood, and fire, so that its location is no longer known. St. Nahum lived forty-five years and entered into rest in the Lord, leaving us a small book of his prophecies.

By the radiance of the vivifying Trinity and the enlightenment of the Spirit, you warned the idolatrous Ninevites of impending doom. You reaped the reward in martyrdom. Now that you stand amid angels before the Light of Triple Splendor and have come to possess the full sway of a prophet, pray for us who honor your memory.

Your pure heart was enlightened by the Spirit and became a vessel of radiant prophecy. Because you saw as present the events yet to come we honor you O blessed and glorious Prophet Nahum.

Timothy, my son: You can depend on this: whoever wants to be a bishop aspires to a noble tak. A bishop must be irreproachable, married only once, of even temper, self-controlled, modest, and hospitable. He should be a good teacher. He must not be addicted to drink. He ought not to be contentious but, rather, gentle, a man of peace. Nor can he be someone who loves money. He must be a good manager of his own household, keeping his children under control without sacrificing his dignity; for if a man does not know how to manage his own house, how can he take care of the church of God? He should not be a new convert, lest he become conceited and thus incur the punishment once meted out to the devil. He must also be well thought of by those outside the church, to ensure that he does not fall into disgrace and the devil’s trap. In the same way, deacons must be serious, straightforward, and truthful. They may not overindulge in drink or give in to greed. They must hold fast to the divinely revealed faith with a clear conscience. They should be put on probation first; then, if there is nothing against them, they may serve as deacons. The women, similarly, should be serious, not slanderous gossips. They should be temperate and entirely trustworthy. Deacons may be married but once and must be good managers of their children and their households. Those who serve well as deacons gain a worthy place for themselves and much assurance in their faith in Christ Jesus.

The Lord told this parable: “A man planted a vineyard, leased it to tenant farmers, and went away for a long time. At vintage time he sent a servant to the tenant farmers to receive his share of the crop from them; but they beat him and sent him away empty-handed. He sent a second servant whom they also beat. Him too they sent away empty-handed, after treating him shamefully. He sent still a third, whom they likewise maltreated before driving him away. The owner of the vineyard asked himself, ‘What am I to do now? Perhaps if I send the son I love, they will respect him.’

“But when the tenant farmers saw the son, they reflected, ‘This is the heir. Let us kill him so that the inheritance will be ours.’ With that, they dragged him outside the vineyard and killed him. What fate do you suppose the owner of the vineyard has in store for them? I will tell you. He will make an end to those tenant farmers and give the vineyard to others.”

When they heard this they said, “God forbid!” Jesus looked directly at them and said, “What do the Scriptures mean when they say, ‘The stone which the builders rejected has become the keystone of the structure’? The man who falls on that stone will be smashed to pieces. It will make dust of anyone on whom it falls.”