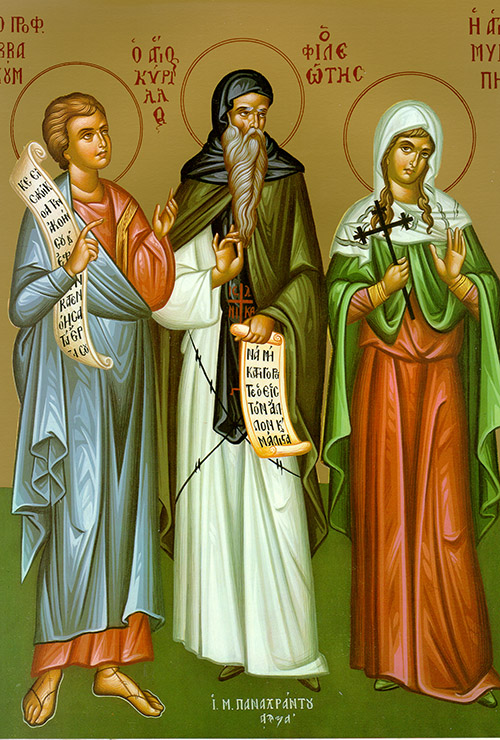 The holy prophet Habakkuk was the son of Asaphat from the tribe of Simeon. He prophesied six hundred years before Christ, during the time of King Manasseh, and foretold the destruction of Jerusalem. When Nebuchadnezzar, King of Babylon, attacked Jerusalem, Habakkuk sought refuge in the land of the Ishmaelites. Habakkuk also prophesied the liberation of Jerusalem and the time of the coming of Christ. He entered into rest in ripe old age and was buried at Kela. His relics were discovered during the reign of Theodosius the Great.

As we celebrate the memory of your prophet Habakkuk, O Lord, we implore You to save our souls through his prayers.

O Habakkuk speaking in behalf of God, you announced to the whole world the coming of God from the south and from a virgin. Standing on the divine watch, you received a message from a radiant angel: you announced the resurrection of Christ to the world. Therefore, we cry out to you: rejoice, radiant goodness of prophets.

Timothy, my son: Everything God created is good, nothing is to be rejected when it is received with thanksgiving, for it is made holy by God’s word and by prayer.

If you put these instructions before the brotherhood you will be a good servant of Christ Jesus, reared in the words of faith and the sound doctrine you have faithfully followed. Have nothing to do with profane myths or old wives’ tales. Train yourself for the life of piety, for while physical training is to some extent valuable, the discipline of religion is incalculably more so, with its promise of life here and hereafter.

Watch yourself and watch your teaching. Persevere at both tasks. By doing so you will bring to salvation yourself and all who hear you.

At that time the scribes and high priests tried to get their hands on Jesus, but they were afraid of the people. They were well aware that Jesus has told the parable [of the tenant farmers] with them in mind. Waiting their chance, they sent spies to Jesus in the guise of honest men to trap him in speech, so that they might then hand him over to the office and authority of the procurator. They put him this problem: “Teacher, we know that your words and your doctrine and completely forthright, that you are no respecter of persons but teach the way of God in truth. May we pay tax to the emperor or not?” Realizing their duplicity Jesus said, “Show me a coin. Whose inscription do you read?” “Caesar’s,” they replied, to which he said, “Then give to Caesar what is Caesar’s, but give to God what is God’s.” They were unable to trap him publicly in speech. His answer completely disconcerted them and reduced them to silence.