Nov. 30 The Holy and Glorious Apostle Andrew, the First-Called 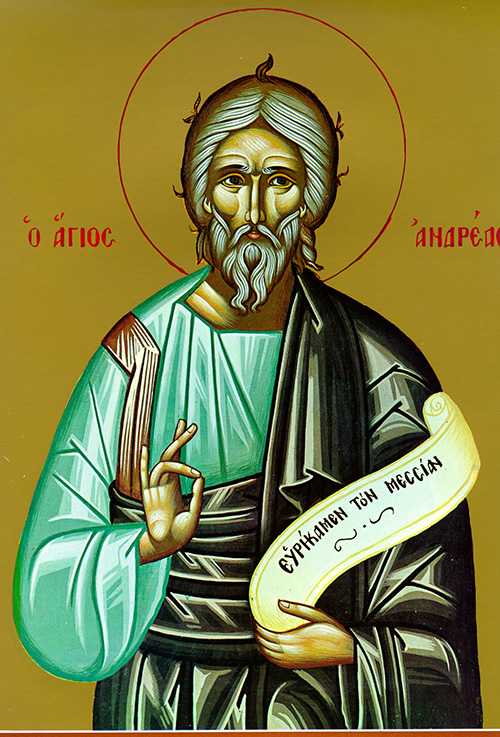 The holy and glorious apostle Andrew, the first-Called. Born in Bethsaida, he was the brother of Simon Peter and a fisherman with him. He was called first from the disciples of John the Baptist at the Jordan by the Lord Jesus. Andrew followed him and even brought his brother to the Lord. After Pentecost it is said that he preached the Gospel in Achaia and at Patrae was tied to a cross. The Church in Constantinople considers him their praiseworthy and remarkable patron.

Andrew, as the first-called of the apostles and brother Peter their leader, pray to the Master of All that He grant peace to the world and great mercy to our souls.

Let us praise Andrew the theologian, the namesake of courage, the first apostle, and follower of his brother Peter, their leader. For, as he called him in times of old, so now he calls us: Come, we have found the One Whom the world desires.

At that time John was present with two of his disciples. As he watched Jesus walk by he said, “Look! There is the Lamb of God!” The two disciples heard what he said, and followed Jesus. When Jesus turned around and noticed them following him, he asked them, “What are you looking for?” They said to him, “Rabbi (which means teacher), where do you stay?” “Come and see,” he answered. So they went to see where he was lodged, and stayed with him that day. (It was about four in the afternoon.)

One of the two who had followed Jesus after hearing John was Simon Peter’s brother Andrew. The first thing he did was seek out his brother Simon and tell him, “We have found the Messiah!” (This term means the Anointed.) Andrew brought Simon to Jesus, who looked at Simon and said, “You are Simon, son of John; your name shall be Cephas (which is rendered to Peter).”

Timothy, my son, I have a solemn charge to give you. This charge is in accordance with the prophecies made in your regard, and I give it to you so that under the inspiration of these prophecies you may fight the good fight, and hold fast to faith and good conscience. Some men, by rejecting the guidance of conscience, have made shipwreck of their faith, among them Hymenaeus and Alexander; these I have turned over to Satan so that they may learn not to blaspheme.

It is my wish, then, that in every place the men shall offer prayers with blameless hands held aloft, and be free from anger and dissension. Similarly, the women must deport themselves properly. They should dress modestly and Quietly, and not be decked out in fancy hairstyles, gold ornaments, pearls, or costly clothing; rather, as becomes women who profess to be religious, their adornment should be good deeds. A woman must learn in silence and be completely submissive. I do not permit a woman to act as teacher, or in any way to have authority over a man; she must be Quiet. For Adam was created first, Eve afterward; moreover, it was not Adam who was deceived but the woman. It was she who was led astray and fell into sin. She will be saved through childbearing, provided she continues in faith and love and holiness – her chastity being taken for granted.

At that time when Jesus was in the temple proclaiming the good news, the high priests and Pharisees, accompanied by the elders, approached him with the question, “Tell us, by what authority do you do these things? In other words, who has authorized you?” Jesus replied, “Let me put a question for you to answer: Did the baptism of John come from God or from men?” They held a brief conference during which someone said, “If we answer, ‘From God,’ he will say, ‘Then why do you not believe in it?’; whereas if we say, ‘From men,’ the people will stone us, so convinced are they that John was a prophet.” They ended by replying they did not know where it came from. Jesus said to them, “In that case, neither will I tell you by whose authority I act.”