Dec. 12 Our Venerable Father Spiridon the Wonderworker, Bishop of Tremithus; Feast of Our Lady of Guadalupe 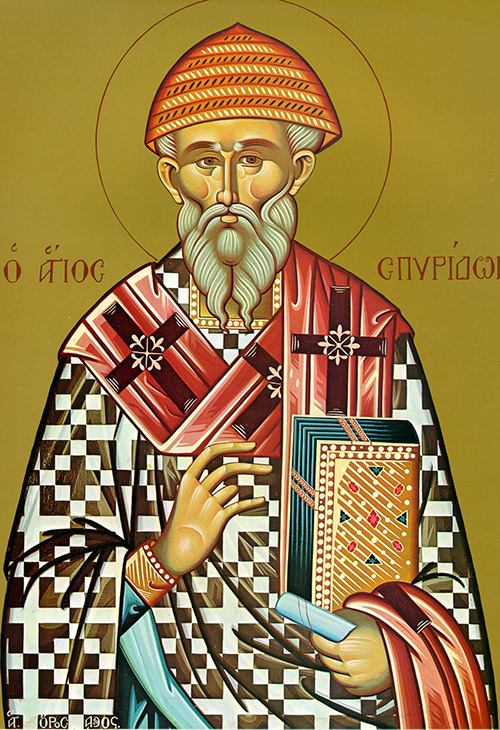 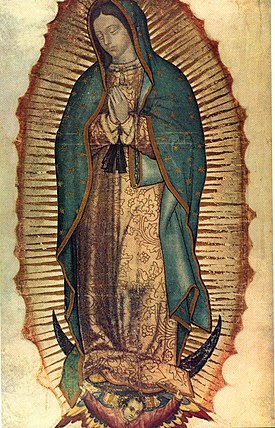 Our venerable father Spiridon the Wonderworker, bishop of Tremithus, was a shepherd who had a wife and children. He used all his substance for the needs of his neighbors and the homeless, for which the Lord rewarded him with the gift of wonderworking. He healed those who were incurably sick, and cast out demons. After the death of his wife, during the reign of Constantine the Great (306-337), he was made Bishop of Tremithus, Cyprus. As a bishop, the saint did not alter his manner of life, but combined pastoral service with deeds of charity. According to the witness if Church historians, St. Spiridon participated in the sessions of the First Ecumenical Council in the year 325. At the Council, the saint entered into a dispute with a Greek philosopher who was defending the Arian heresy. The power of St. Spiridon’s plain and direct speech showed everyone the importance of human wisdom before God’s Wisdom.

Our Lady of Guadalupe first appeared on December 9, 1591 in Mexico to St. Juan Diego, and bestowed on him an icon “not made with human hands,” requesting that a church be built in her honor on that mountain. Her shrine there is one of the most celebrated places of pilgrimage in the Americas. Pope John Paul II named her the Patroness of the Americas.

You were revealed as a champion of the First Council, and a wonderworker, our God-bearing father Spiridon; for you called out to the woman dead in the tomb and you transformed the serpent into gold. Ans when you sang your holy prayers, you had angels serving with you, O most holy one. Glory to Him who gave you strength. Glory to Him who granted a crown to you! Glory to Him who through you grants healing to all.

When you appeared in the New World, O Mother of God, you fixed your image on Juan Diego’s rose-laden tilma. All the poor, hungry, and oppressed seek you, Lady of Guadalupe. We gaze upon your miraculous icon and find hope, crying out to your Son concealed in your womb: Hear our plea for justice, O Most merciful Lord.

Inspired by the love of Christ, O Most Sacred One, and giving wings to your mind through the radiance of the Spirit! You found divine vision through your deeds, O God-pleasing One, becoming a divine oblation, asking Divine Illumination for all.

No longer shall the New World lie wounded in useless blood sacrifice, for she who is clothed with the sun has revealed the Son to us. O Mother of the Americas, imprint his name upon our hearts, just as you wove your image into the cactus cloth. Teach your children to cry out: O Christ God, our hope, glory to you.

In those days Mary set out, proceeding in haste into the hill country to a town of Judah, where she entered the house of Zechariah and greeted Elizabeth. When Elizabeth heard Mary’s greeting, the baby leapt in her womb. Elizabeth was filled with the Holy Spirit and cried out in a loud voice: “Blest are you among women and blest is the fruit of your womb. But who am I that the mother of my Lord should come to me? The moment your greeting sounded in my ears, the baby leapt in my womb for joy. Blest is she who trusted that the Lord’s words to her would be fulfilled.”

Then Mary said: “My being proclaims the greatness of the Lord, my spirit finds joy in God my savior, for he has looked upon his servant in her lowliness; all ages to come shall call me blessed. God who is mighty has done great things for me, holy is his name.”

Mary remained with Elizabeth about three months and then returned home.

Timothy, my son: In every large household there are vessels not only of gold and silver but also of wood and clay, some for distinguished and others for common use. The lesson is that if a person will but cleanse himself of evil things he may be a distinguished vessel, dedicated and useful to the master of the house and ready for every noble service. So, turn from youthful passions and pursue integrity, faith, love, and peace, along with those who call on the Lord in purity of heart. Have nothing to do with senseless, ignorant disputations. As you well know, they only breed Quarrels, and the servant of the Lord must not be Quarrelsome but must be kindly toward all. He must be an apt teacher, patiently and gently correcting those who contradict him, in the hope always that God will enable them to repent and know the truth. Thus, taken captive by God to do his will, they shall escape the devil’s trap.

At that time as Jesus and the disciples were leaving the boat the people immediately recognized him. The crowds scurried about the adjacent area and began to bring in the sick on bedrolls to the place where they heard he was. Wherever he put in an appearance, in villages, in towns, or at crossroads, they laid the sick in the market places and begged him to let them touch just the tassel of his cloak. All who touched him got well.

The Pharisees and some of the experts in the law who had come from Jerusalem gathered around Jesus. They had observed a few of his disciples eating meals without having purified–that is to say, washed–their hands. The Pharisees, and in fact all Jews, cling to the custom of their ancestors and never eat without scrupulously washing their hands. Moreover, they never eat anything from the market without first sprinkling it. There are many other traditions they observe–for example, the watching of cups and jugs and kettles. So the Pharisees and the scribes questioned Jesus: “Why do your disciples not follow the tradition of our ancestors, but instead take food without purifying their hands?” He said to them: “How accurately Isaiah prophesied about you hypocrites when he wrote, ‘This people pays me lip service but their heart is far from me. Empty is the reverence they do me because they teach as dogmas mere human precepts.’ You disregard God’s commandment and cling to what is human tradition.”