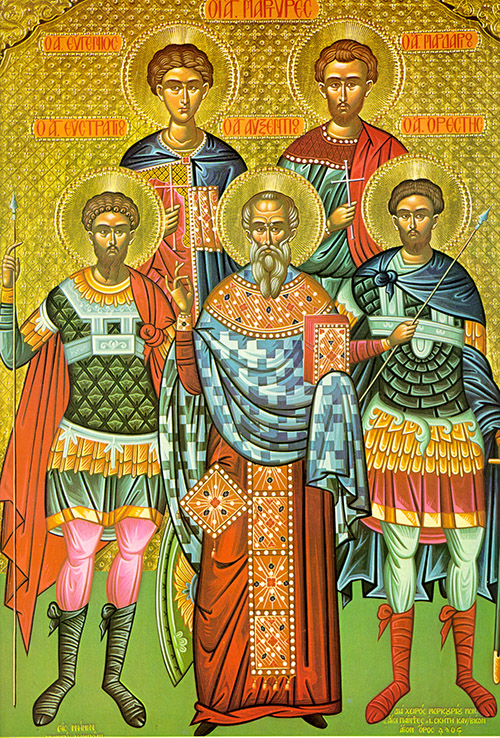 The holy martyrs Eustratius, Auxentius, Eugene, Mardarius, and Orestes gave their lives for Christ in Armenia during the reign of Diocletian (284-305). St. Eustratius was a Roman commander in the city of Satalionus; Eugene was his companion in the army; Orestes was likewise a distinguished soldier; Auxentius was a priest; and Mardarius was an ordinary citizen who came, like Eustratius, from the town of Arabrak. Auxentius was beheaded, Eugene and Mardarius died while being tortured, Orestes expired on a red-hot iron grid, and Eustratius died in a fiery furnace.

The holy virgin Lucy kept guard over her enkindled lamp for the coming of her Spouse as long as she lived. She was led from Syracuse to Sicily to death for Christ in 304; she was worthy to enter marriage with him and to possess light unfailing.

O victorious one, you have been like a bright star, enlightening those who stand in darkness of ignorance. Your faith, as a lance in your hand, armed you with courage against the haughtiness of your enemies. O Eustratius, you were the most eloquent of orators.

Readings for the martyrs

Brothers and sisters: Draw your strength from the Lord and His mighty power. Put on the armor of God so that you may be able to stand firm against tactics of the devil. Our battle is not against human forces but against the principalities and powers, the rulers of this world of darkness, the evil spirits in regions above. You must put on the armor of God if you are to resist on the evil day; do all that your duty requires, and hold your ground. Stand fast, with the truth as the belt around your waist, justice as your breastplate, and zeal to propagate the gospel of peace as your footgear. In all circumstances hold faith up before you as your shield; it will help you extinguish the fiery darts of the evil one. Take the helmet of salvation and the sword of the spirit, the word of God.

The Lord said to his disciples, “Before any of this [trouble] they will manhandle and persecute you, summoning you to synagogues and prisons, bringing you to trial before kings and governors, all because of my name. You will be brought to give witness on account of it. I bid you resolve not to worry about your defense beforehand, for I will give you words and a wisdom which none of your adversaries can take exception to or contradict. You will be delivered up even by your parents, brothers, relatives and friends, and some of you will be put to death. All will hate you because of me, yet not a hair of your head will be harmed. By patient endurance you will save your lives.

“When you see Jerusalem encircled by soldiers, know that its devastation is near. Those in Judea at the time must flee to the mountains; those in the heart of the city must escape it; those in the country must not return. These indeed will be days of retribution, when all that is written must be fulfilled.

“The women who are pregnant or nursing at the breast will fare badly in those days! The distress in the land and the wrath against this people will be great. The people will fall before the sword; they will be led captive in the midst of the Gentiles. Jerusalem will be trampled by the Gentiles, until the times of the Gentiles are fulfilled.

“There will be signs in the sun, the moon, and the stars. On the earth, nations will be in anguish, distraught at the roaring of the sea and the waves. Men will die of fright in anticipation of what is coming upon the earth. The powers in the heavens will be shaken. After that, men will see the Son of Man coming on a cloud with great power and glory. When these things begin to happen, stand erect and hold your heads high, for your deliverance is near at hand.”

Timothy, my son: All Scripture is inspired of God and is useful for teaching – for reproof, correction, and training in holiness so that the man of God may be fully competent and equipped for every good work.

In the presence of God and of Christ Jesus, who is coming to judge the living and the dead, and by his appearing and his kingly power. I charge you to preach the word, to stay with this task whether convenient or inconvenient-correcting, reproving, appealing–constantly teaching and never losing patience. For the time will come when people will not tolerate sound doctrine, but, following their own desires, will surround themselves with teachers who tickle their ears. They will stop listening to the truth and will wander off to fables.

At that time the Pharisees and the scribes questioned Jesus: “Why do your disciples not follow the tradition of our ancestors, but instead take food without purifying their hands?” He said to them: “How accurately Isaiah prophesied about you hypocrites when he wrote, ‘This people pays me lip service but their heart is far from me. Empty is the reverence they do me because they teach as dogmas mere human precepts.’ You disregard God’s commandment and cling to what is human tradition.”

Jesus went on to say: “You have made a fine art of setting aside God’s commandment in the interest of keeping your traditions! For example, Moses said, ‘Honor your father and your mother’; and in another place, ‘Whoever curses father or mother shall be put to death.’ Yet you declare, ‘If a person says to his father or mother, Any support you might have had from me is korban (that is, dedicated to God)’, you allow him to do nothing more for his father or mother. That is the way you nullify God’s word in favor of the traditions you have handed on. And you have many other such practices besides.” Jesus summoned the crowd again and said to them: “Hear me, all of you, and try to understand. Nothing that enters a man from outside can make him impure; that which comes out of him, and only that, constitutes impurity. Let everyone heed what he hears!”