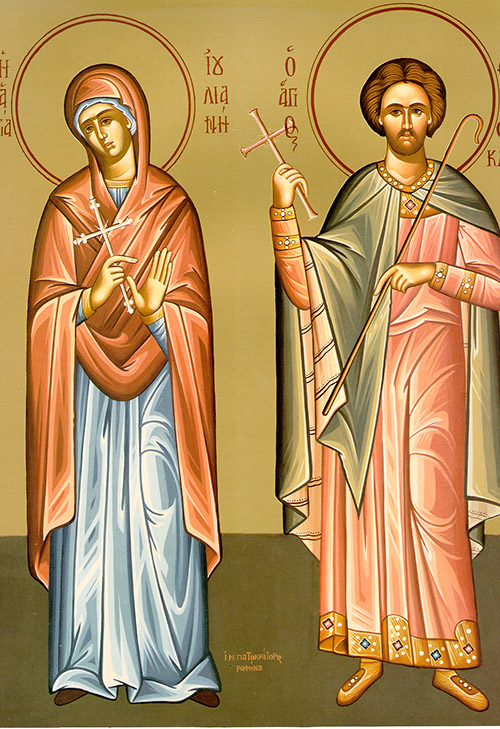 The holy martyr Juliana was born to pagan parents, and was converted to the Faith at a young age. She refused to marry the man chosen for her by her parents because he was not a Christian. She was arrested, beaten, and then beheaded. With her many others were martyred  who saw her witness and were converted by it in the year 304.

Your lamb Juliana, O Jesus, cries out in a loud voice: I love You,  my Bridegroom; I seek You with painful longing; I am crucified with You; in Your baptism, I am buried with You; I suffer for You that I may reign with You; and I die for You that I may live with You. Receive me as a spotless sacrifice immolated with love for You. By her prayers, O merciful One, save our souls.

O virgin, made most pure with the goodness of virginity, and now, having been crowned with the martyr’s crown, you grant healing and salvation to those in need who approach your shrine for Christ pours forth divine grace and eternal life.

Brothers and sisters: About the priesthood we have much to say, and it is difficult to explain, for you have become deaf. Although by this time you should be teaching others, you need to have someone teach you again the basic elements of the oracles of God; you need milk, not solid food. Everyone whose food is milk alone is ignorant of the word that sanctifies, for he is a child. Solid food is for the mature, for those whose faculties are trained by practice to distinguish good from evil.

Let us, then, go beyond the initial teaching about Christ and advance to maturity, not laying the foundation all over again: repentance from dead works, faith in God, instruction about baptisms and laying-on of hands, resurrection of the dead, and eternal judgment. And, God permitting, we shall advance!

For when men have once been enlightened and have tasted the heavenly gift and become sharers in the Holy Spirit, when they have tasted the good word of God and the powers of the age to come, and then have fallen away, it is impossible to make them repent again, since they are crucifying the Son of God for themselves and holding him up to contempt. Ground which drinks in the rain falling on it again and again, and brings forth vegetation useful to those whom it is cultivated, receives the blessing of God. But if it bears thorns and thistles, it is worthless; it is soon cursed, and finally burned.

At that time Jesus gave the disciples strict orders not to tell anyone about him. He began to teach them that the Son of Man had to suffer much, be rejected by the elders, the chief priests, and the scribes, but put to death, and ride three days later. He said these things quite openly. Peter then took Jesus aside to remonstrate him. At this Jesus turned around and, eyeing the disciple, reprimanded Peter. “Get out of my sight, you satan! You are not judging by God’s standards but by man’s!” Jesus summoned the crowd with his disciples and said to them: “If a man wishes to come after me, he must deny his very self, take up his cross, and follow in my steps.”