Dec. 8 The Feast of the Maternity of Anna 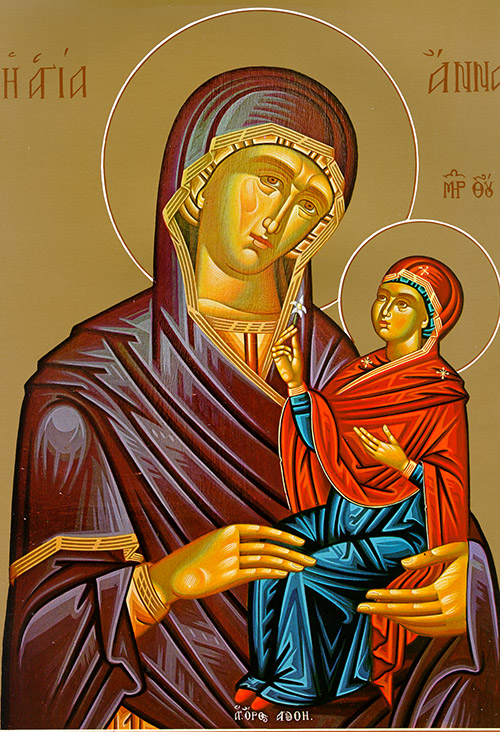 The Feast of the Maternity of the Holy Anna, mother of Our Blessed Lady, the Mother of God and Ever-Virgin Mary: According to tradition, Joachim and Anna were childless for fifty years of their married life. In their old age, they were promised that a daughter would be born to them. After nine months, St. Anna bore a daughter, blessed by God and by all subsequent generations of humanity: the most holy Theotokos, the ever-virgin Mary. St. Anna was the youngest daughter of the priest Nathan from Bethlehem, descended from the tribe of Levi. She married St. Joachim, who was a native of Galilee. The Conception of the Virgin Mary by St. Anna took place in Jerusalem. In the icon for this feast, saints Joachim and Anna are usually depicted with hands folded in prayer; their eyes are also directed upward and they contemplate the Mother of God, who stands in the air with outstretched hands; under her feet is an orb encircled by a serpent (symbolizing the devil), which strives to conquer all the universe by its power. There are also icons in which St. Anna holds the Theotokos on her left arm as an infant. On St. Anna’s face is a look of reverence. Traditionally, this Feast is especially venerated by pregnant women.

Today the bonds of barrenness are loosed, for God has heard the prayers of Joachim and Anna. He promised beyond all hope, the birth of their godly daughter. The Indescribable, Himself, born of her as a mortal, commanded us through the angel to sing to her: Rejoice, O woman full of grace, the Lord is with you.

Today the whole world celebrates how Anna became a mother by the power of God. She conceived the woman whose conception of the Word is beyond our words.

At that time. Zechariah’s wife, Elizabeth, conceived. She went into seclusion for five months, saying: “In these days the Lord is acting on my behalf; he has seen fit to remove my reproach among men.”

In the sixth month, the angel Gabriel was sent from God to a town of Galilee names Nazareth, to a virgin betrothed to a named Joseph, of the house of David. The virgin’s name was Mary. Upon arriving, the angel said to her: “Rejoice, O highly favored daughter! The Lord is with you. Blessed are you among women.” Mary was deeply troubled by his words, and wondered what his greeting meant. The angel went on to say to her: “Do not fear, Mary. You have found favor with God. You shall conceive and bear a son and give him the name Jesus. Great will be his dignity and he will be called Son of the Most High. The Lord God will give him the throne of David his father. He will rule over the house of Jacob forever and his reign will be without end.”

Mary said to the angel, “How can this be since I do not know man?” The angel answered her: “The Holy Spirit will come upon you and the power of the Most High will overshadow you; hence, the holy offspring to be born will be called Son of God. Know that Elizabeth your kinswoman has conceived a son in her old age; she who was thought to be sterile is now in her sixth month, for nothing is impossible with God.”

Mary said: “I am the servant of the Lord. Let it be done to me as you say,” With that the angel left her.

Timothy, my son: Tell those who are rich in this world’s goods not to be proud, and not to rely on so uncertain a thing as wealth. Let them trust in the God who provides us richly with all things for our use. Charge them to do good, to be rich in good works and generous, sharing what they have. Thus will they build a secure foundation for the future, for receiving that life which is life indeed.

O Timothy, guard what has been committed to you. Stay clear of worldly, idle talk and the contradictions of what is falsely called knowledge. In laying claim to such knowledge, some men have missed the goal of faith. Grace be with you.

The Lord said to his disciples, “When you see the great signs of the coming of the Son of Man, stand erect and hold your heads high, for your deliverance is near at hand.” Then Jesus told them a parable: “Notice the fig tree, or any other tree. You observe them when they are budding, and know for yourselves that summer is neat. Likewise when you see all the things happening of which I speak, know that the reign of God is near. Let me tell you this: the present generation will not pass away until all this takes place. The heavens and the earth will pass away, but my words will not pass.”