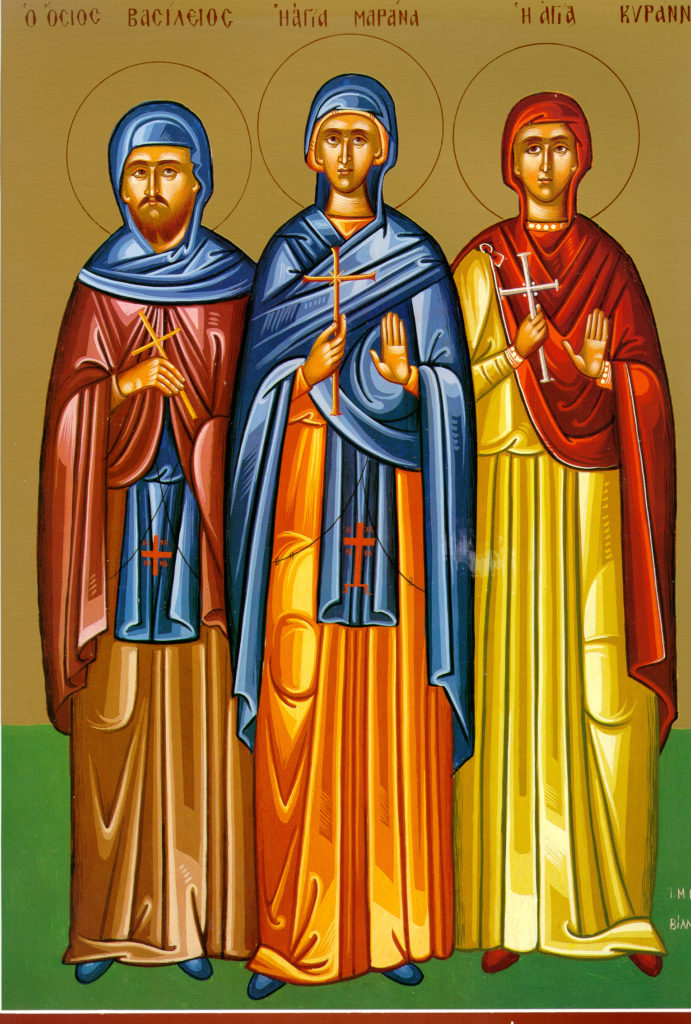 St. Basil the Confessor was a monk and suffered during the reign of the iconoclast emperor Leo the Isaurian. When a persecution started against those who venerated holy icons, St. Basil and his companion St. Procopius of Decapolis were subjected to much torture and locked up in prison. Here both martyrs languished for a long while, until the death of the impious emperor. When the holy Confessors Basil and Procopius were set free along with other venerators of holy icons, they continued in their monastic struggles, instructing many in the Orthodox Faith and virtuous life.

You made the wilderness your dwelling, O father Basil, the bearer of God. You became an angel in the flesh and a wonderworker. Through fasts, vigils, and prayers, you obtained from God special graces to heal the sick and to sanctify the souls of those who come to you with trust. Glory to the One who gave you strength! Glory to the One who crowned you! Glory to the One who through your intercession grants healing to all!

Holy and wise father, when you received your calling from God, you left the troubles of this world and embraced the ascetic life. Most holy Basil, you received the graces of miracles and healing diseases.

In the beginning, when God created the heavens and the earth– and the earth was without form or shape, with darkness over the abyss and a mighty wind sweeping over the waters–

Then God said: Let there be light, and there was light. God saw that the light was good. God then separated the light from the darkness. God called the light “day,” and the darkness he called “night.” Evening came, and morning followed– the first day.

Then God said: Let there be a dome in the middle of the waters, to separate one body from the other. God made the dome, and it separated the water below the dome from the water above the dome. And so it happened. God called the dome “sky.” Evening came, and morning followed– the second day.

The proverbs of Solomon, the Son of David, king of Israel:

That people may know wisdom and discipline, may understand intelligent sayings;

May receive instruction in wise conduct, in what is right, just, and fair;

That resourcefulness may be imparted to the naive; knowledge and discretion to the young.

The wise by hearing them will advance in learning, the intelligent will gain sound guidance,

To comprehend proverb and byword, the words of the wise and their riddles.

Fear of the Lord is the beginning of knowledge; fools despise wisdom and discipline.

Hear, my son, your father’s instruction, and reject not your mother’s teaching;

A graceful diadem will they be for your head; a pendant for your neck.

My son, should sinners entice you,

Do not go if they say, “Come along with us! Let us lie in wait for blood, unprovoked, let us trap the innocent;

All kinds of precious wealth shall we gain, we shall fill our houses with booty;

Cast in your lot with us, we shall have one purse!”

My son, do not walk in the way with them, hold back your foot from their path!

For their feet run to evil, they hasten to shed blood.

This is the way of everyone greedy for loot: it takes away their lives.