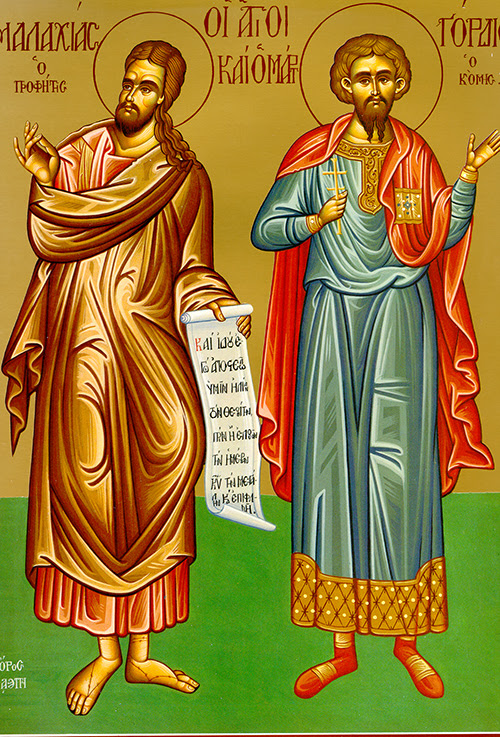 The Holy Prophet Malachi, after the return from the Babylonian Captivity, announced the great day of the Lord and his coming to his temple, and that always and everywhere a pure offering should be made to his name.

The Holy Martyr Gordius, praised in the writings of St. Basil the Great, was a centurion who suffered during the reign of the Emperor Diocletian (304).

O divinely inspired Malachi, you announced the coming of Christ, and you spoke of the dignity of the Law. How clearly you informed us: The Lord is surely coming; Whom we have joyfully sought in the Temple. Beg Him now to save our souls.

Your martyr Gordius, O Lord our God, in his struggle received an incorruptible crown from You. With Your strength, he brought down the tyrants and broke cowardly valor of demons. Through his prayers, O Christ our God, save our souls.

O Prophet, by bestowing rich prophecies, you clearly predicted the coming of Christ and the salvation of the world. He enlightened the world by His radiance.

O holy Gordius, your sweat has soaked the earth, and your precious blood has made the universe rejoice. Through your intercession, save those who sing your glory with faith and honor you fittingly, O divinely minded and glorious martyr worthy of all praise.

Brothers and sisters: do not refuse to hear him who speaks. For if the Israelites did not escape punishment when they refused to listen as God spoke to them on earth, how much greater punishment will be ours if we turn away from him who speaks from heaven! His voice then shook the earth, but now he has promised, “I will once more shake not only earth but heaven!” And that “once more” shows that shaken, created things will pass away, so that only what is unshaken may remain. Wherefore, we who are receiving the unshakable kingdom should hold fast to God’s grace through which we may offer worship acceptable to him and reference and awe.

Brothers and sisters, I beg you to bear with this word of encouragement, for I have written to you rather briefly. I must let you know that our brother Timothy has been set free. If he is able to join me soon, he will be with me when I see you. Greetings to all your leaders and to all the people of God. Grace be with you all.