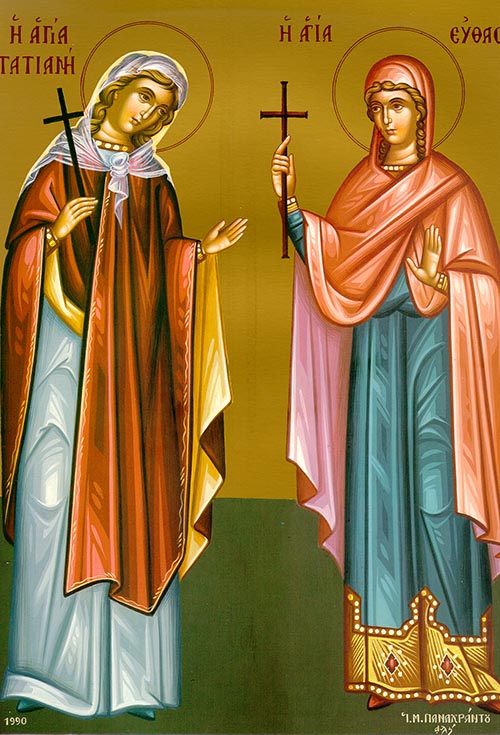 The holy martyr Tatiana was a Roman whose parents were from the nobility. She was a Christian and a deaconess in the church. After the death of Emperor Heliogabalus, there reigned the Emperor Alexander, whose mother, Mammaea, was a Christian. Alexander himself was wavering and indecisive in his faith, for he kept statues of Christ, Apollo, Abraham, and Orpheus in his palace. His chief assistants took it upon themselves to persecute Christians without orders from the emperor. When they brought out the virgin Tatiana for torture, she prayed to God for her torturers, and their eyes were opened. They saw four angels around the martyr. Seeing this, eight of them believed in Christ, for which they were also then tortured and slain. Tatiana was martyred around the year 227.

O Jesus, your lamb Tatiana cries out to You with great love. O my Bridegroom, I long for You in great pain. I am crucified with You, and in baptism I am buried with You. I suffer for your sake in order to reign with You. I die for You in order to live in You. Accept me as an immaculate victim since I am immolated for your love. Through her intercession, O merciful One, save our souls.

You shone in glory and were stained in your own blood, and like a beautiful bird you soared to heaven. O martyr Tatiana, pray for those who honor you.

Be patient, therefore, my brothers and sisters, until the coming of the Lord. See how the farmer awaits the precious yield of the soil. He looks forward to it patiently while the solid receives the winter and spring rains. You, too, must be patient. Steady your hearts, because the coming of the Lord is at hand. Do not grumble against one another, my brothers and sisters, lest you be condemned. See! The judge stands at the gate.

Taking a seat opposite a treasury, Jesus observed the crowd putting money into the collection box. Many of the wealthy put in sizable amounts; but one poor widow came and put in two small copper coins worth a few cents. Jesus called his disciples over and told them: “I want you to observe that this poor widow contributed more than all the others who donated to the treasury. They gave from their surplus wealth, but she gave from her want, all that she had to live on.”