Jan. 16 The Veneration of the Precious Chains of the Holy and All-Praiseworthy Apostle Peter 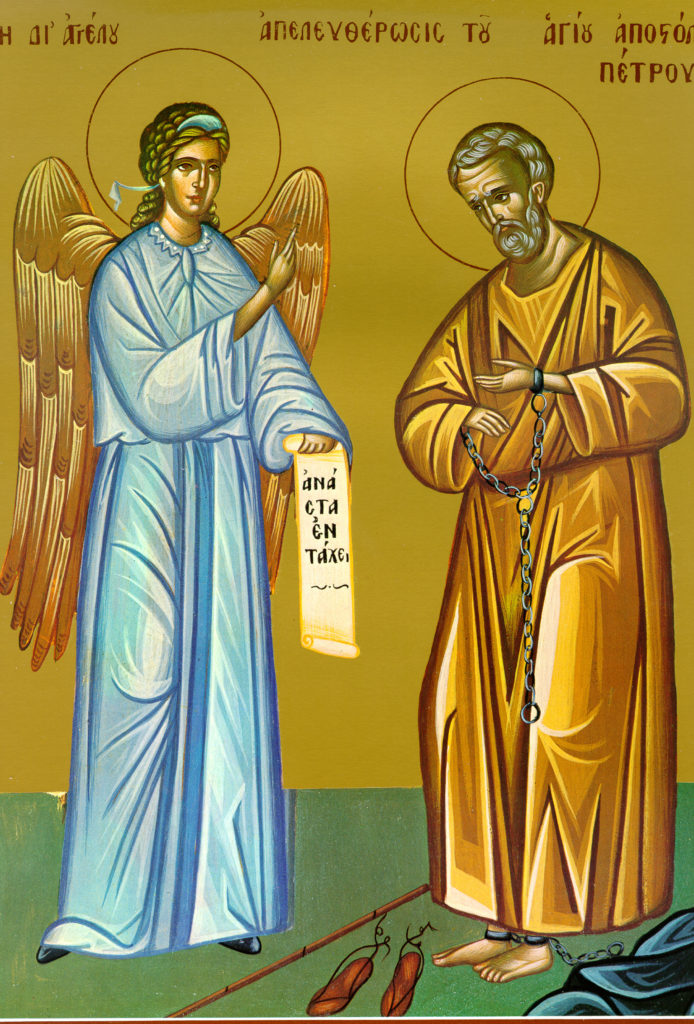 In about the year 42 the apostle Peter was thrown into prison for preaching about Christ the Savior. In prison he was bound by two iron chains. The night before his trial, an angel of the Lord came to Peter, removed his chains, and let him out of the prison (Acts 12:1-11). When Christians learned of this miracle, they took the chains and kept them as precious items. For three centuries the chains were kept in Jerusalem, and those who were afflicted with illness and approached them with faith received healing. The patriarch Juvenal gifted these chains to the wife of the emperor Theodosius the Younger and were sent to Constantinople. Later, one chain was given to the wife of the emperor Valentinian who built a church dedicated to the apostle Peter and placed that chain in it. Also placed in that church were the chains that bound Peter before his martyrdom under the emperor Nero.

Without leaving Rome you come to us with your chains. We venerate them in our faith, O prime apostle, and we pray to you: obtain mercy for us from God by your prayers.

Where is praise Peter, the heavenly disciple of truth, the first and greatest of the apostles. Let us kiss his chains with faith that our sins may be forgiven.

Readings for the veneration

In those days, king Herod started to harass some of the members of the church. He beheaded James the brother of John, and when he saw this please certain of the Jews, he took Peter into custody too. During the feast of Unleavened Bread he had Peter arrested and thrown into prison with four squads of soldiers to guard him. Herod intended to bring him before the people after the Passover. Peter was thus detained in prison, while the church prayed fervently to God on his behalf. During the night before Herod was to bring him to trial, Peter was sleeping between two soldiers, fastened with double chains, while guards kept watch at the door. Suddenly an angel of the Lord stood nearby and light shone in the cell. He tapped Peter on the side and woke him. “Hurry, get up!” the angel said. With that, the chains dropped from Peter‘s wrists. The angel said, “Put on your belt and your sandals!” This Peter did. Then the Angel told him, “Now put on your cloak and follow me.”

Peter followed the angel out, but with no clear realization that this was taking place through the Angels’ help. The whole thing seemed to him a mirage. They passed the first guard, then the second, and finally came to the iron gate leading out to the city, which opened for them of itself. They emerged and made their way down a narrow alley, when suddenly the Angel left him. Peter had recovered his senses by this time, and said, “Now I know for certain that the Lord has sent his angel to rescue me from here its clutches and from all that the Jews hope for.”

To such a person one might say, “You have faith and I have work– is that it?” Show me your faith without works, and I will show you the faith that underlies my works! Do you believe that God is one? You are quite right. The demons believe that, and shudder. Do you want proof, you ignoramus, that without works faith is idle? Was not our father Abraham justified by his works when he offered his son Isaac on the altar? There you see proof that faith was both assisting his works and implemented by his works. You also see how the Scripture was fulfilled which says, “Abraham believed God, and it was credited to him as justice”: for this he received the title “God’s friend.”