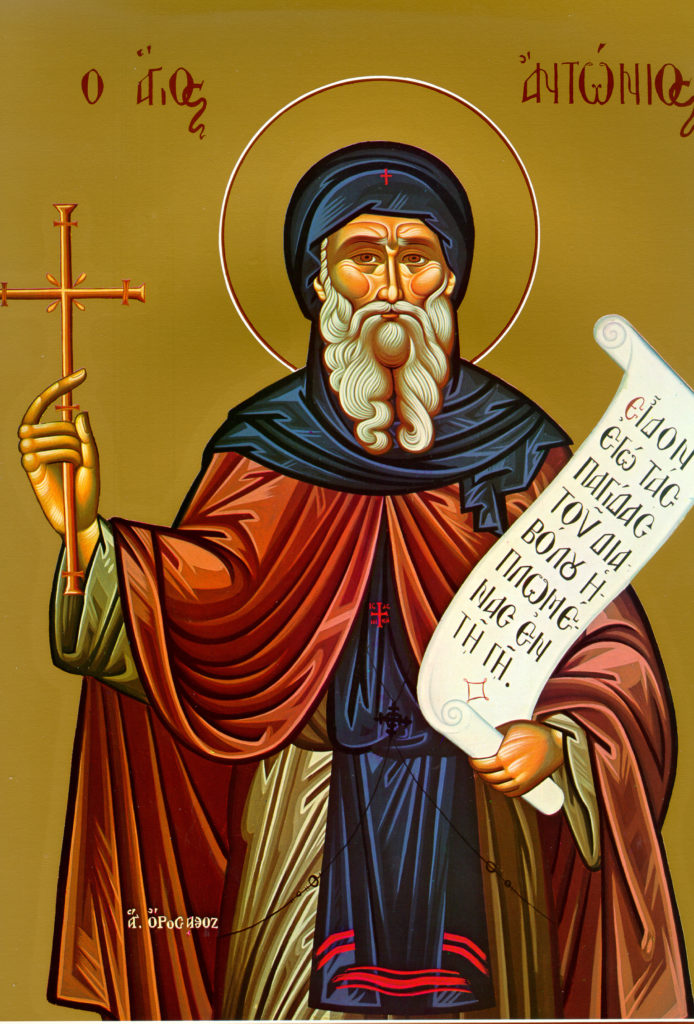 Our venerable and divinely inspired father, Anthony the Great, was Egyptian by birth, who went into the desert during the reign of Constantine the Great, in the year 312. Living to the age of 105, he died in 356. He was a friend of St. Paul the Hermit and was one of the founders of the cenobitical life.

Father Anthony, you imitated Elijah in his zeal, and you followed John the Baptist in his holy way of life. You took up your abode in the desert and strengthened the world by your prayers. Intercede with Christ our God that He may save our souls.

You rejected the troubles of this world, most venerable Anthony, and spent your life in peace by imitating John the Baptist. With him, we exalt your name; for you are a perfect example of good conduct.

Brothers and sisters: Obey your leaders and submit to them, for they keep watch over you as men who must render an account. So act that they may fulfill their task with joy, not sorrow, for that would be harmful to you. Pray for us; we are confident that we may have a good conscience. Wishing, as we do, to ask rightly in every respect. I Especially ask your prayers that I may be restored to you very soon. May the God of peace, who brought up from the dead the great Shepherd of the sheep by the blood of the eternal covenant, Jesus our Lord, furnish you with all that is good, that you may do his will. Through Jesus Christ may he carry out in you all that is pleasing to him. To Christ be glory forever! Amen.

Brothers and sisters, not many of you should become teachers; you should realize that those of us who do so will be called to the stricter account. All of us fall short in many respects. If a person is without fault in speech he is a man in the fullest sense, because he can control his entire body. When we put bits into the mouths of horses to make them obey us, guide the rest of their bodies. It is the same with ships: however large they are, and despite the fact that they are driven by fierce winds, they are directed by very small rudders on whatever course the steersman’s impulse may select. The tongue is something like that. It is a small member, yet it makes great pretensions.

See how tiny the spark is that sets a huge forest ablaze! The tongue is such a flame. It exists among our members as a whole universe of malice. The tongue defiles the entire body. Its flames encircle our course from birth, and its fire is kindled by hell. Every form of life, four-footed or winged, crawling or swimming, can be tamed, and has been tamed, by mankind; the tongue no man can tame. It is a restless evil, full of deadly poison. We use it to say, “Praised be the Lord and Father”; then we use it to curse men, though they are made in the likeness of God. Blessing and curse come out of the same mouth. This ought not to be, my brothers and sisters!