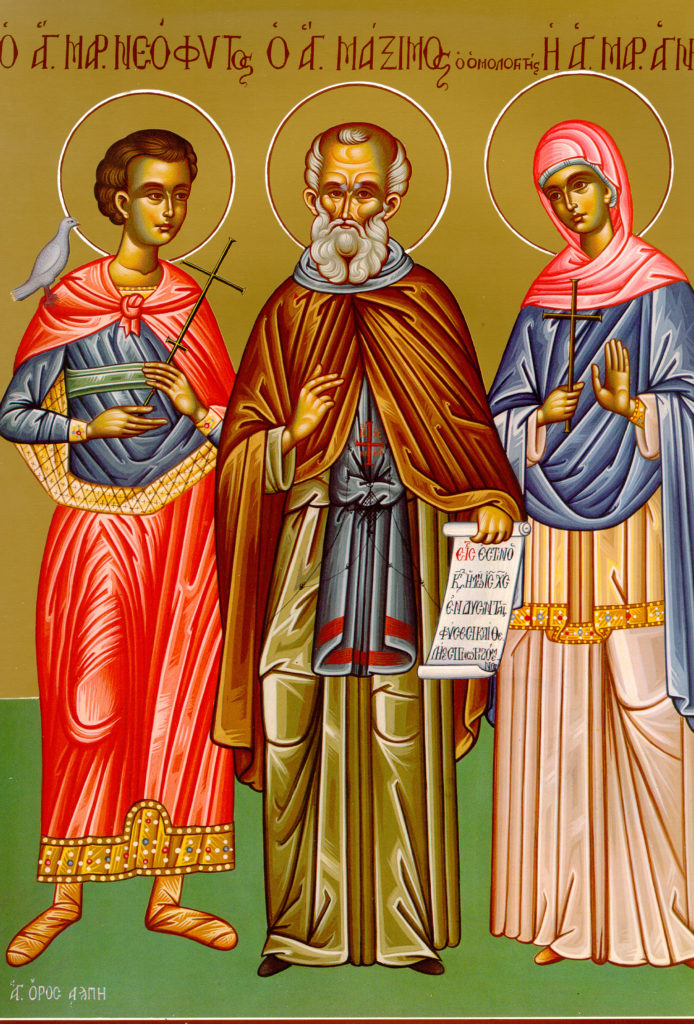 Our venerable father Maximus the confessor, noted theologian and writer who resigned hid post as secretary to the Emperor Heraclius and entered the monastery of Chrysopolis, of which he eventually became hegumen. He headed the opposition to the Monothelite heresy. For this he was banished, imprisoned, and lost his tongue and right hand.

The holy martyr Neophyte, of Nicea, died a martyr at the age of fifteen during the reign of Diocletian.

The holy martyrs Eugene, Candidus, Valerian, and Aquila suffered for their faith in Christ during the reign of Diocletian and Maximian, under the regimental commander Lycius.

O guide of the true faith, mirror of piety and commendable behavior, bright star of the universe, and adornment of pontiffs, you enlightened us all by your teachings. O wise Maximus, inspired by God and lyre of the Holy Spirit, intercede with Christ our God that he may save our souls.

O Lord our God, your holy martyr Neophyte has deserved the crown of immortality on account of his good fight. Armed with your strength, he has vanquished his persecutors and crushed Satan’s dreadful might. Through his supplications, O Christ our God, save our souls.

Troparion for the martyrs

Today the Church is filled with music, and the world is replete with miracles. These four holy men have acted bravely against guile, and in their faith they professed Christ. O saints, obtain remission of sins for those who venerate your holy memory.

Let us, O faithful, honor with worthy hymns the great Maximus so highly devoted to the Holy Trinity. He preached faith in God with great courage and glorified Christ in his two natures, two wills, and two operations. Therefore, let us cry out: Rejoice, O preacher of the true faith.

You are a new shoot in the garden of Christ’s martyrs. You offer the fruits of heavenly understanding which nourish those who venerate you in faith. O glorious, wise, and brave martyr Neophyte, as you stand before God, pray for our souls.

Kontakion for the martyrs

Now that we have assembled let us praise the holy and God-bearing martyrs: Eugene, Candidus, Valerian, and Aquila. They spurned the goods of the world, and now we honor them as a choir of four.

Brothers and sisters: By faith [the Saints] conquered the kingdoms, did what was just, obtained the promises; they broke the jaws of lions, put out raging fires, escaped the devouring sword; though weak they were made powerful, became strong in battle, and turned back foreign invaders. Women received back their dead through resurrection. Others were tortured and would not receive deliverance, in order to obtain a better resurrection. Still others endured mockery, scourging, even chains and imprisonment. They were stoned, sawed in two, put to death at sword’s point; they were about garbed in the skins of sheep or goats, needy, afflicted, tormented. The world was not worthy of them. They wandered about in the deserts and on mountains, they dwelt in caves and in holes in the earth. Yet despite the fact that all of these were approved because of their faith, they did not obtain what had been promised. God had made a better plan, a plan which included us. Without us, they were not to be made perfect.

The Lord said to his disciples: “There is nothing concealed that will not be revealed, nothing hidden that will not be made known. Everything you have said in the dark will be heard in the daylight; what you have whispered in locked rooms will be proclaimed from the rooftops. I say to you who are my friends: Do no not be afraid of those who kill the body and can do no more. I will show you whom you ought to fear. Fear him who has power to cast into Gehenna after he has killed. Yes, I tell you, fear him. Are not five sparrows sold for a few pennies? Yet not one of them is neglected by God. In very truth, even the hairs of your head are counted! Fear nothing, then. You are worth more than a flock of sparrows.

“I’ll tell you, whoever acknowledges me before men– the Son of Man will acknowledge him before the angels of God. But the man who has disowned me in the presence of men will be disowned in the presence of the angels of God. Anyone who speaks against the Son of Man will be forgiven, but whoever blasphemes the Holy Spirit will never be forgiven. When they bring you before synagogues, rulers, and authorities, do not worry about how to defend yourselves or what to say. The Holy Spirit will teach you at that moment all that should be said.”

Brothers and sisters, your faith in our glorious Lord Jesus Christ must not allow of favoritism. Suppose there should come into your assembly a man fashionably dressed, with gold rings on his fingers, and at the same time a poor man in shabby clothes. Suppose further that you were to take notice of the well-dressed man and say, “Sit right here, please,” whereas you were to say to the poor man, “You can stand!” or “Sit over there by my footrest.” Have you not in a case like this discriminated in your hearts? Have you not set yourself up as judges handing down corrupt decisions?

Listen, dear brothers and sisters. Did not God choose those who are poor in the eyes of the world to be rich in faith and heirs of the kingdom he promised to those who love him? Yet you treated the poor man shamefully. Are not the rich exploiting you? They are the ones who hale you into the courts and who blaspheme that noble name which has made you God’s own.

You are acting rightly, however, if you fulfill the law of the kingdom. Scripture has it, “You shall love your neighbor as yourself.” But if you show favoritism, you commit sin and are convicted by the law as transgressors. Whoever falls into sin on one point of the law, even though he keeps the entire remainder, has become guilty on all counts. For he who said, “You shall nor commit adultery,” also said, “You shall not kill.” If therefore you do not commit adultery but do commit murder, you have become a transgressor of the law.

Always speak and act as men destined for judgement under the law of freedom. Merciless is the judgement on the man who has not shown mercy; but mercy triumphs over judgement.

Peter was moved to say to Jesus, “ We have put aside everything to follow you!” Jesus answered, “I give you my word, there is no one who has given up home, brothers or sisters, mother or father, children or property, for me and for the gospel who will not receive in this present age a hundred times as many homes, brothers and sisters, mothers, children and property– and persecution besides– and in the age to come, everlasting life. Many who are first shall come last, and the last shall come first,”

The disciples were on the road going up to Jerusalem, with Jesus walking in the lead. Their mood was one of wonderment, while that of those who followed was fear.