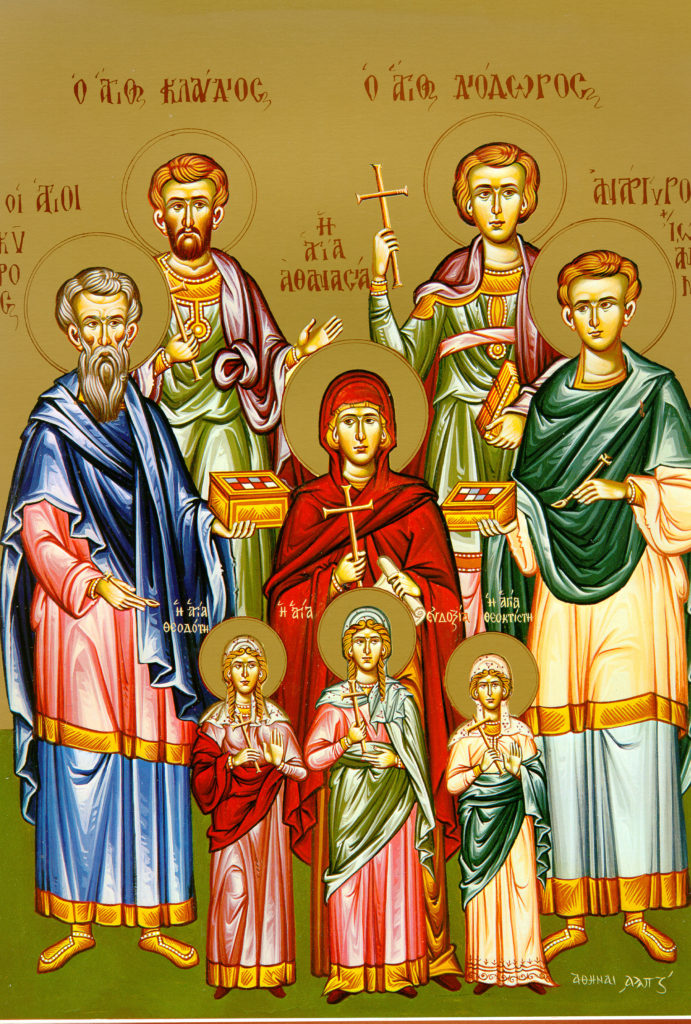 Saint Cyrus was a noted physician in the city of Alexandria, where he had been born and raised. He was a Christian and he treated the sick without charge. Preaching the gospel, the holy physician converted many pagans to Christ. During the persecution of Diocletian (284-305), St. Cyrus withdrew into Arabia, where he became a monk. He continued to heal people by his prayer, having received from God the gift to heal every sickness.

In the city of Edessa at this time lived the soldier John, a pious Christian. When the persecution started, he went to Jerusalem and there he heard about St. Cyrus. He began to search for him, going first to Alexandria and then to Arabia. When St. John finally found St. Cyrus, he remained with him and became his faithful follower. After helping the Christian woman Athanasia and her three young daughters, Theoctiste, Theodota, and Eudoxia, they were flogged and then beheaded, receiving their crowns of martyrdom.

The grace of the trinity settled in your pure hearts, most blessed Cyrus and John. You have become marvelous exorcists of impure spirits. You were doctors over hidden and visible illnesses. Now that you stand before God, heal our spiritual diseases by your unceasing prayers.

Receiving the gift of miracles from divine grace, you work all sorts of wonders, O holy ones. By your invisible labors you uproot all our passions, for you our heavenly doctors, O God-wise Cyrus! O glorious John!

Dearly beloved: Christ suffered for you and left you an example, to have you follow in his footsteps. He did no wrong; no deceit was found in his mouth. When he was insulted, he returned no insult. When he was made to suffer, he did not counter with threats. Instead he delivered himself up to the One who judges justly. In his own body he brought your sins to the cross, so that all of us, dead to sin, could live in accord with God’s will. By his wounds you were healed. At one time you were straying like sheep, but now you have returned to the shepherd, the guardian of your souls.

You married women must obey your husbands, so that any of them who do not believe in the word of the gospel may be won over apart from preaching, through their wives conduct. They have only to observe the reverent purity of your way of life. The affectation of an elaborate hairdress, the wearing of golden jewelry, or the donning of rich robes is not for you. Your adornment is rather the hidden character of the heart, expressed in the unfading beauty of a calm and gentle disposition. This is precious in God’s eyes. The holy women of past ages used to adorn themselves in this way, reliant on God and obedient to their husbands— for example, Sarah, who was subjected to Abraham and called him her master. You are her children when you do what is right and let no fears alarm you.

You husbands, too, must show consideration for those who share your lives. Treat women with respect as the weaker sex, heirs just as much as you to the gracious gift of life. If you do so, nothing will keep your prayers from being answered.

In summary, then, all of you should be like-minded, sympathetic, loving toward one another, kindly disposed, and humble. Do not return evil for evil or insult for insult. Return a blessing instead. This you have been called to do, that you may receive a blessing as your inheritance.