June 30 Synaxis of the Holy and Glorious Twelve Apostles 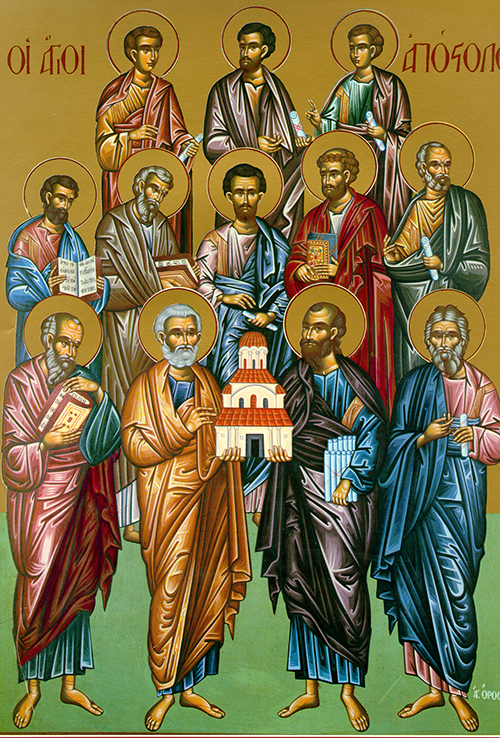 The synaxis of the glorious and all-praiseworthy Twelve Apostles of Christ appears to be an ancient Feast. The church honors each of the Twelve Apostles on separate dates throughout the year, and has established general commemoration for all of them on the day after the commemoration of the glorious and and first-ranked among the apostles Peter and Paul. The holy God-crowned Emperor Constantine the Great built a church in Constantinople in honor of the Twelve Apostles. There are instructions for this Feast which date from the fourth century.

Your preaching has spread over the whole earth, because you have received the Spirit in flaming tongues. You burned down the lies of idolatry, and you have caught the straying people with the net of faith. The heavens declare your glory for this, and the firmament proclaims your works. We join them in a song to your memory: Through the prayers of your twelve apostles, save us, O God.

Christ our Rock has exalted the foundation stone of faith, the chosen twelve from the disciples and Paul. As we observe their memory with faith, let us praise the One who glorifies them.

At that time Jesus went up the mountain and summoned the men he himself had decided on, who came to join him. He named twelve as his companions whom he would send to preach the good news; they were likewise to have authority to expel demons. He appointed the Twelve as follows: Simon to whom he gave the name Peter; James and John the sons of Zebedee (he gave these two names Boanerges, or “sons of thunder”); Andrew, Philip, Bartholomew, Matthew, Thomas, James the son of Alphaeus; Thaddaeus, Simon of the Zealot party, and Judas Iscariot, who betrayed him.

Brothers and sisters: I say this now to you Gentiles: Inasmuch as I am the apostle of the Gentiles, I glory in my ministry, trying to rouse my fellow Jews to envy and save some of them. For if their rejection has meant reconciliation for the world, what will their acceptance mean? Nothing less than life from the dead! If the first fruits are consecrated, so too is the whole mass of dough, and if the root is consecrated, so too are the branches. If some of the branches were cut off and you, a branch of the wild olive tree, have been grafted in among the others and have come to share in the rich root of the olive, do not boast against the branches. If you do boast, remember that you do not support the root; the root supports you. You will say, “Branches were cut off that I might be grafted in.” Well and good. They were cut off because of unbelief and you are there because of faith. Do not be haughty on that account, but fearful. If God did not spare the natural branches, he will certainly not spare you.

Consider the kindness and the severity of God – severity toward those who fell, kindness toward you, provided you remain in his kindness; if you do not, you too will be cut off. And if the Jews do not remain in their unbelief they will be grafted back on, for God is able to do this. If you were cut off from the natural wild olive and, contrary to nature, were grafted into the cultivated olive, so much the more will they who belong to it by nature be grafted into their own olive tree.

The Lord said to his disciples: “Everything has been given over to me by my Father. No one knows the Father but the Son–and anyone to whom the Son wishes to reveal him.