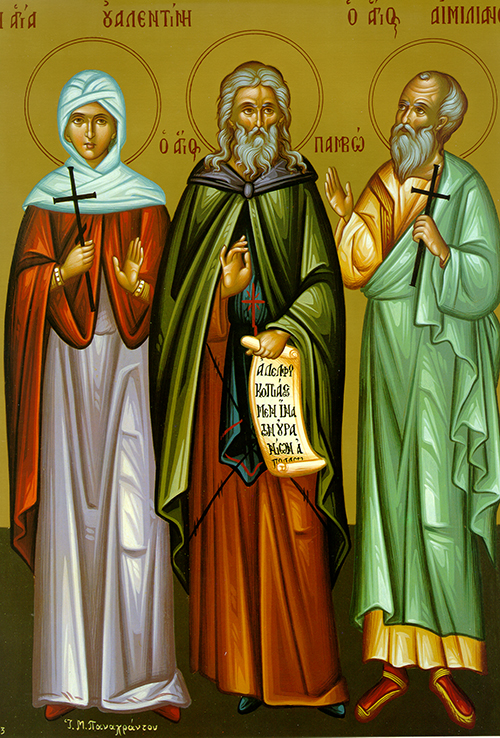 The holy martyr Hyacinth was born into a pious Christian family in the city of Amastridea (now Amastra in Anatolia). An angel that appeared gave him his name. As a three-year-old boy, St. Hyacinth asked God that a dead infant might be resurrected. The Lord hearkened to his childish prayer, and the dead one arose. Both lads afterwards grew up together, and they lived an ascetic life. St. Hyacinth once noticed how the pagans were worshiping a tree, and so he chopped it down. For this they subjected him to harsh tortures. They smashed out all his teeth, and having bound him with rope, they dragged him along the ground and threw him in prison. It was there that the holy sufferer departed to the Lord.

The holy martyr Emilian, who was a Slav, suffered for Christ during the reign of Emperor Julian the Apostate (361-363). Julian wanted to restore the cult of the pagan gods throughout the Roman Empire, and he issued an edict, according to which all Christians who failed to honor the pagan gods would be subject to death. Instead of being intimidated by these threats, St. Emilian’s faith in Christ was strengthened. The next day he went into a pagan temple and smashed the statues with a hammer. The governor ordered that St. Emilian be beaten mercilessly, and then to be burned alive. He did not perish when he was thrown into the fire, but instead the flames consumed many of the pagans who were standing about. When the fire had gone out, St. Emilian lay down upon the dying embers, and gave up his soul to the Lord. The wife of the pagan ruler was also a secret Christian, and she gathered up the saint’s relics and buried them. Afterward, a church dedicated to the holy Martyr Emilian was built at Constantinople, where his relics were transferred.

The venerable martyr Tarsykia Matskiv was a nun in the order of the Congregation of the Sisters Servants of Mary Immaculate. During the Second World War she was missioned in the Ukrainian city of Krystynopil. When the Soviet Army invaded the city in 1944, Sister Tarsykia was shot by a soviet soldier as she went to open the gates to welcome the priest coming to celebrate Divine Liturgy. She was buried in the garden of the convent under the statue of the Theotokos, as it was too dangerous to go to the cemetery. ​​On September 2, 2007, Blessed Tarsykia’s mortal remains were exhumed, and ceremonially transferred to her hometown of Chodoriv, via the Cathedral of Stryj Eparchy. In silent procession, throngs of people escorted her relics, borne on the shoulders of priests, as pallbearers, to an outdoor Divine Liturgy, to accommodate these crowds, before being encrypted in the church itself. This was the funeral Blessed Tarsykia never had.

Inflamed with the divine fervor, you were not afraid of the fire. You entered it willingly and were reduced to ashes in the flames. You went up like a sacrifice to the Master. O glorious martyr Emilian, pray for us.

Brothers and sisters: I wrote to you a letter not to associate with immoral persons. I was not speaking of association with immoral people in this world, or the covetous or thieves or idolaters. To avoid them, you would have to leave the world! What I really wrote about was your not associating with anyone who bears the title “brother” if he is immoral, covetous, an idolater, an abusive person, a drunkard, or a thief. It is clear that you must not eat with such a man. What business is it of mine to judge outsiders? Is it not those inside the community you must judge? God will judge the others. (Scripture says,) “Expel the wicked man from your midst.”

How can anyone with a case against another dare bring it for judgment to the wicked and not to God’s holy people? Do you not know that the believers will judge the world? If the judgment of the world is to be yours, are you to be thought unworthy of judging in minor  matters? Do you know that we are to judge angels? Surely, then, we are up to deciding everyday affairs. If you have such matters to decide, do you accept as judges those who have no standing in the church? I say this in an attempt to shame you. Can it be that there is no one among you wise enough to settle a case between one member of the church and another? Must brother drag brother into court, and before unbelievers at that? Why, the very fact that you have lawsuits against one another is disastrous for you. Why not put up with injustice, and let yourselves be cheated? Instead, you yourselves injure and cheat your very own brothers. Can you not realize that the unholy will not fall heir to the kingdom of God? Do not deceive yourselves: no fornicators, idolaters, or adulterers, no sodomites, thieves, misers, or drunkards, no slanderers or robbers will inherit God’s kingdom. And such were some of you; but you have been washed, consecrated, justified in the name of our Lord Jesus Christ and in the Spirit of our God.

At that time, Jesus went to native place and spent his time teaching them in their synagogues. They were filled with amazement, and said to one another, “Where did this man get such wisdom and miraculous powers? Isn’t this the carpenter’s son? Isn’t Mary known to be his mother and James, Joseph, Simon, and Judas his brothers? Aren’t his sisters our neighbors? Where did he get all this?” They found him altogether too much for them. Jesus said to them, “No prophet is without honor except in his native place, indeed in his own house.” And he did not work many miracles there because of their lack of faith.