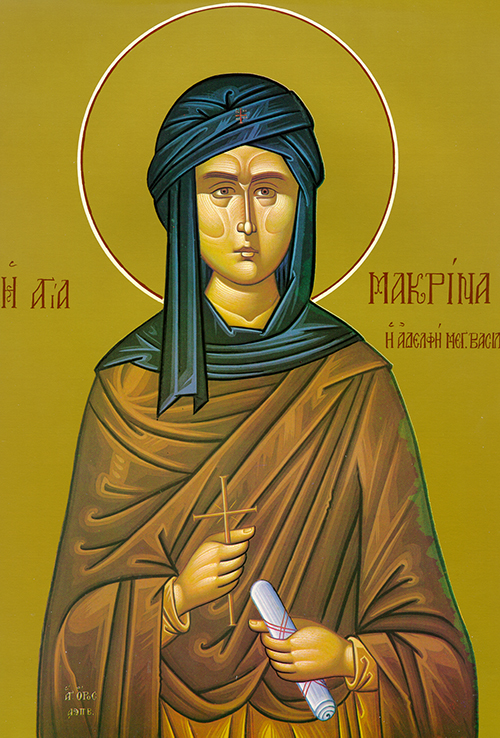 Our venerable mother Macrina was sister of St. Basil the Great, Gregory of Nyssa, and Peter of Sebaste. She was learned in Sacred Scripture and led a solitary life. She provided a wonderful example of those possessing the desire for God, who had forsaken the vanity of the world.

Our venerable father Dios was called the Wonderworker and was an archimandrite in the 5th century. He left his home in Antioch and was ordained in Constantinople and founded a monastery under the Rule of the Akoemeti (i.e., the “Unsleeping”).

You saw your bridegroom die and were struck by the vanity of this world and its fleeting life. Taking purpose in your life, you were betrothed to the Immortal One. You drew his love with fasting and humility. Now your spirit rejoices with the angels, O venerable Macrina.

You loved the good God with all your heart, O Macrina. You shouldered your cross and sincerely followed Him. You found the total remission of your sins in Him.

Brothers and sisters: Glorify God in your body. Now for the matters you wrote about. A man is better for having no relations with a woman. But to avoid immorality, every man should have his own wife and every woman her own husband. The husband should fulfill his conjugal obligations toward his wife, the wife hers toward her husband. A wife does not belong to herself but to her husband; equally, a husband does not belong to himself but to his wife. Do not deprive one another, unless perhaps by mutual consent for a time, to devote yourselves to prayer. Then return to one another, that Satan may not tempt you through your lack of self-control. I say this by way of concession, not as a command. Given my preference, I should like you to be as I am. Still, each one has his own gift from God, one this and another that.

To those not married and to widows I have this to say: It would be well if they remain as they are, even as I do  myself; but if they cannot exercise self-control, they should marry. It is better to marry than to be on fire. To those now married, however, I give this command (though it is not mine; it is the Lord’s): a wife must not separate from her husband. If she does separate, she must either remain single or become reconciled to him again. Similarly, a husband must not divorce his wife.

As for the other matters, although I know of nothing the Lord has said, I say: If any brother has a wife who is an unbeliever but is willing to live with him, he must not divorce her.

On one occasion Herod the tetrarch, having heard of Jesus’ reputation, exclaimed to his courtiers, “This man is John the Baptizer –  it is he in person, raised from the dead; that is why such miraculous powers are at work in him!” Recall that Herod had had John arrested, out in chains, and imprisoned on account of Herodias, the wife of his brother Philip. That was because John had told him, “It is not right for you to live with her.” Herod wanted to kill John but was afraid of the people, who regarded him as a prophet. Then on Herod’s birthday the daughter of Herodias performed a dance before the court which delighted Herod so much that he swore he would grant her anything she asked for. Prompted by her mother she said, “Bring me the head of John the Baptizer on a platter.” The king immediately had his misgivings, but because of his oath and the guests who were present he gave the order to have John beheaded in prison. John’s head was brought in on a platter and given to the girl, who took it to her mother. Later his disciples presented themselves to carry his body away and bury it. Afterward, they came and informed Jesus.

When Jesus heard this, he withdrew by boat from there to a deserted place by himself. The crowds heard of it and followed him on foot from the towns.