July 20 Feast of the Holy and Glorious Prophet Elijah 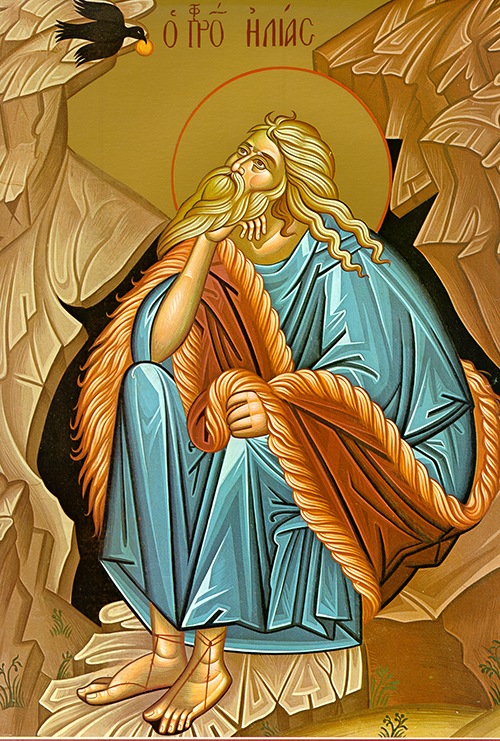 The holy and glorious prophet Elijah the Tishbite was a prophet of the Lord in the days of Ahab, the king of Israel and defended the rights of the one God against the unfaithful people with such a strength of spirit that he prefigured not only John the Baptist but even Christ himself. Written prophecies do not remain, but his memory is faithfully kept, especially on Mount Carmel.

An angel in the flesh, the foundation of the prophets, and the second forerunner of Christ, the glorious Elijah from on high sent grace to Elisha to cure sickness and cleanse lepers. He likewise overflows with healing for those who honor him.

Prophet and seer of the mighty deeds of our God, renowned Elijah, you stopped the rain clouds by a word. Intercede for us with the only One who loves mankind.

Brothers and sisters, as your models in suffering hardships and in patience take the prophets who spoke in the name of the Lord. Those who have endured we call blessed. You have heard of the steadfastness of Job, and have seen what the Lord, who is compassionate and merciful, did in the end.

Above all else, my brothers and sisters, you must not swear an oath, any oath at all, either “by heaven” or “by earth.” Rather, let it be “yes” if you mean yes and “no” if you mean no. In this way you will not incur condemnation.

If anyone among you is suffering hardship, he must pray. If a person is in good spirits, he should sing a hymn of praise. Is there anyone sick among you? He should ask for the presbyters of the church. They in turn are to pray over him, anointing him with oil in the Name [of the Lord]. This prayer uttered in faith will reclaim the one who is ill, and the Lord will restore him to health. If he has committed any sins, forgiveness will be his. Hence, declare your sins to one another, and pray for one another, that you may find healing.

The fervent petition of a holy man is powerful indeed. Elijah was only a man like us, yet he prayed earnestly that it would not rain and no rain fell on the land for three years and six months. When he prayed again, the sky burst forth with rain and the land produced its crop.

My brothers and sisters, the case may arise among you of someone straying from the truth, and of another bringing him back. Remember this: the person who brings a sinner back from his way will save his soul from death and cancel a multitude of sins.

At that time the people were asking, “Is not this Joseph’s son?” Jesus said to them, “You will doubtless quote me the proverb, ‘Physician, heal yourself,’ and say, ‘Do here in your own country the things we have heard you have done in Capernaum.’ But in fact,” Jesus went on, “no prophet gains acceptance in his native place. Indeed, let me remind you, there were many widows in Israel in the days of Elijah when the heavens remained closed for three and a half years and a great famine spread over the land. It was to none of these that Elijah was sent, but to a widow of Zaraphath near Sidon. Recall, too, the many lepers in Israel in the time of Elisha the prophet; yet not one was cured except Naaman the Syrian.”

At these words the whole audience in the synagogue was filled with indignation. They rose up and expelled him from the town, leading him to the brow of the hill on which it was built and intending to hurl him over the edge. But he went straight through their midst and walked away.