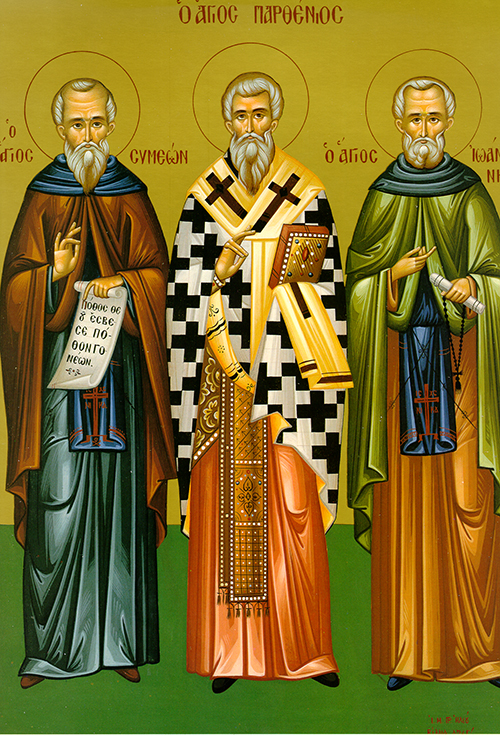 Our venerable father Simeon, fool for Christ, and his fellow ascetic John: Simeon, called Salus [i.e., of the sea; he lived for 29 years next to the Dead Sea], at Emesa in Syria. Moved by the divine Spirit, Simeon desired to be considered a Fool for Christ and ignoble among people. Likewise the commemoration of St. John, hermit, who for almost thirty years was a companion to St. Simeon in his holy wandering and in a hermitage at the Dead Sea in the late 6th century.

The holy prophet Ezekiel was a son of the priest Buzi. At the time of the exile in the land of the Chaldeans, he was notable for his vision of the glory of the Lord. As an examiner placed before the house of Israel, he reproved the unfaithfulness of the Chosen People. He foresaw that the holy city of Jerusalem would be overthrown into ruins and the people deported. He himself was in the midst of the captives; he nourished their hope and prophesied to them that the dry bones would return to life.

O prophet of God Ezekiel, through the gift of the Spirit you saw the sealed door of the Word’s entrance. Beg Him to open the doors of his mercy to us and save the souls of those who honor your memory.

Let us praise with love and faith the angelic Simeon. Acting like an angel in the flesh, he glows with virtue. Let us remember John along with him, since they pray together unceasingly to the Lord for us.

You were a prophet of God, O wonderful Ezekiel. You predicted the Lord’s coming in the flesh, and the Creator has come like a lamb. The Son of God has been revealed to the ages.

Brothers and sisters, each of you should continue before God in the condition of life that was his when he was called. With respect to virgins, I have not received any commandments from the Lord, but I give my opinion as one who is trustworthy, thanks to the Lord’s mercy. It is this: In the present time of stress it seems good to me for a person to continue as he is. Are you bound to a wife? Then do not seek your freedom. Are you free of a wife? If so, do not go in search of one. Should you marry, however, you will not be committing sin. Neither does a virgin commit a sin if she marries. But such people will have trials in this life, and these I should like to spare you.

I should like you to be free of all worries. The unmarried man is busy with the Lord’s affairs, concerned with pleasing the Lord; but the married man is busy with this world’s demands and occupied with pleasing his wife. This means he is divided. The virgin – indeed, any unmarried woman – is concerned with things of the Lord, in pursuit of holiness in body and spirit. The married woman, on the other hand, has the cares of this world to absorb her and ic concerned with pleasing her husband. I am going into this with you for your own good. I have no desire to place restrictions on you, but I do want to promote what is good, what will help you to devote yourselves entirely to the Lord.

At that time the disciples approached Jesus and said, “Do you realize the Pharisees were scandalized when they heard your pronouncement?” Jesus replied, “Every planting not put down by my heavenly Father will be uprooted. Let them go their way; they are blind leaders of the blind. If one blind man leads another, both will end in a pit.”

Then Peter spoke up to say, “Explain the parable to us.” Jesus asked, “Are you, too, still incapable of understanding? Do you not see that everything that enters the mouth passes into the stomach and is discharged into the latrine, but what comes out of the mouth originates in the mind? It is things like these that make a man impure. From the mind stem evil designs–murder, adulterous conduct, fornication, stealing, false witness, blasphemy. These are the things that make men impure. As for eating with unwashed hands – that makes no man impure.”

Then Jesus left that place and withdrew to the district of Tyre and Sidon.