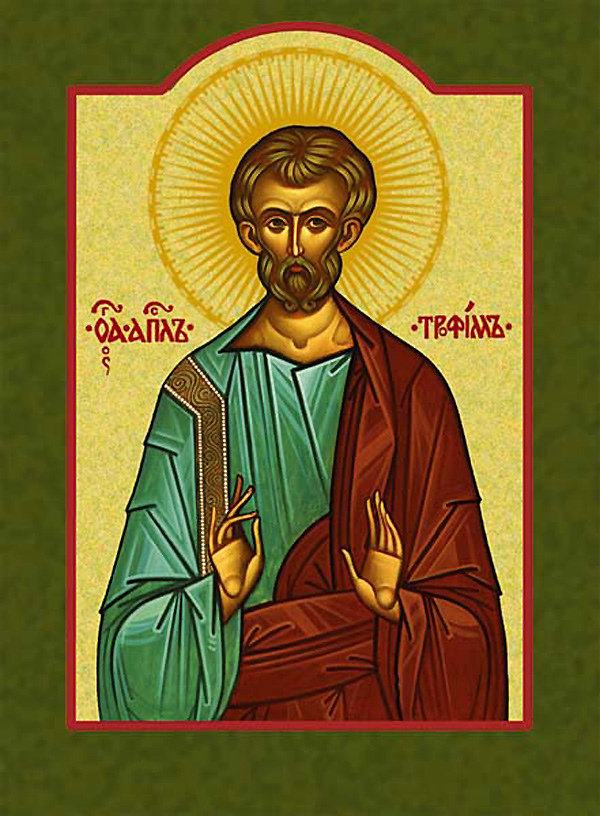 The holy martyrs Trophimus, Theophilus, and thirteen martyrs with them, suffered during the persecution against Christians under the emperor Diocletian (284-305). Brought to trial, they bravely confessed themselves Christians and refused to offer sacrifice to idols. After many fierce tortures, they broke the legs of the holy martyrs and threw them into a fire. Strengthened by the Lord, they came out of the fire completely unharmed, and they glorified Christ all the more. Unable to break the will of the holy confessors, the torturers beheaded them.

The holy martyrs Appolinaris and Vitalis were bishops of Ravenna in the 1st century. While spreading the unsearchable riches of Christ among the nations, Appolinaris was a good pastor who went before his flock (cf John 10:4). It is said that he was decorated with the glorious honor of martyrdom at the church of Classis near Ravenna in Flaminia. He is said to have been the first bishop of Ravenna. On this day, it is said, commanded by God a famous basilica be built by Vitalis, bishop of Ravenna in Flaminia, in that city. Because of his undaunted faith, tenaciously held, he has been honored from time immemorial with the holy martyrs Valeria, Gervasius, Protasius, and Ursicinus.

O martyrs, you entered the tribunal of the unbelievers like true soldiers on a grave mission. You suffered many torments for the sake of the faith, professing Christ with fortitude. Intercede with Christ for what we need.

You embraced all your suffering with heroic stance, and you were arrayed with glory, O blessed saint. You turned a wolf into a lamb by divine grace and inspired him to join you in martyrdom. For this we praise you, O glorious Trophimus.

Brothers and sisters, I beg you through the mercy of God to offer your bodies as a living sacrifice holy and acceptable to God, your spiritual worship. Do not conform yourselves to this age but be transformed by the renewal of your mind, so that you may judge what is God’s will, what is good, pleasing and perfect.

Thus, in virtue of the favor given to me, I warn each of you not to think more highly of himself than he ought. Let him estimate himself soberly, in keeping with the measure of faith that God has apportioned him.

When Jesus had finished instructing his twelve disciples, he left that locality to teach and preach in their towns.