July 26 The Holy Priest-Martyr Hermolaus and His Companions; The Holy Venerable Martyr Paraskevia; Our Venerable Father Moses the Carpathian of the Monastery of the Caves 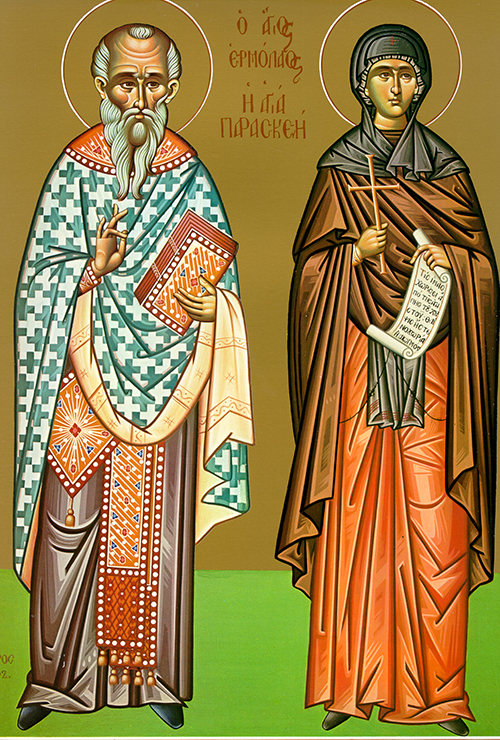 The holy priest-martyr Hermolaus was a priest in Nicomedia in the time of the Emperor Maximian, and was with the 20,000 martyrs condemned to be burned in their church. He and two other priests escaped. They were caught, tortured, and martyred.

The holy venerable Paraskevia was born in Rome, to Christian parents. She preached Christ even as a small child. When her parents died, she gave away all her goods to the poor and received the monastic habit. She was denounced by the emperor Anoninus Pius and beheaded in the 2nd century.

Our venerable father Moses the Carpathian of the Monastery of the Caves was in the service of St. Boris, and after the saint’s death in 1015, Moses fled to Kiev. He was later taken captive by the Polish king when he invaded Kiev. Moses was bought by a widow who wanted him for her husband. Moses refused as he wished to become a monk, and endured 100 lashes everyday until the widows death. He fled back to Kiev to the Monastery of the Caves where pursued asceticism for 10 years; he died in about the year 1043 and was buried in the Near Caves.

Your promised pledge is like a marriage, for you promised your fidelity to the one faith, and you inherited life, O Paraskevia, the martyr named for Christ. From your heritage you bestow health, and you pray for the salvation of our souls.

We praise you with sacred hymns of another Joseph, O Most Honored Moses, great lover of purity and chastity, equal of the angels. We earnestly pray to you: Entreat Christ our God to heal all our passions and to grant us great mercy.

Living like a good pastor, you received a martyr’s crown. You scattered the sacrifices before the idols and proved yourself a good shepherd of your flock. You were an honest teacher for Panteleimon, O wise saint. We venerate you on this account, O father Hermolaus, and cry out: Deliver us from misfortune through your prayers.

Come you faithful, let us praise Paraskevia the martyr. She shines with miracles in the world, dispelling the mist of lies, and she gives bountiful grace to those who sing: Rejoice, O long-suffering martyr.

Brothers and sisters: We know that God was not pleased with most of [our fathers], for “they were struck down in the desert.”

These things happened as an example to keep us from wicked desires such as theirs. Do not become idolators, as some of them did. Scripture says, “The people sat down to eat and drink, and arose to take their pleasure.” let us not indulge in lewdness as some of them did, so that in one day twenty-three thousand perished. Let us not test the Lord as some of them did, only to be destroyed by snakes. Nor are you to grumble as some of them did, to be killed by the destroying angel. The things that happened to them serve as an example. They have been written as a warning to us, upon whom the end of the ages has come. For all these reasons, let anyone who thinks he is standing upright watch out lest he fall!

The Lord said to his disciples: “Be on the lookout against the yeast of the Pharisees and Sadducees.” They could think only, “This is because we have brought no bread.” Jesus knew their thoughts and said, “Why do you suppose it is because you have no bread? How weak your faith is! Do you still not understand? Do you not remember the five loaves among the five thousand and how many baskets-full you picked up? Or the seven loaves among the four thousand and how many hampers-full you retrieved? Why is it you do not see that I was not speaking about bread at all but warning you against the yeast of the Pharisees?” They finally realized he was not issuing a warning against yeast used for bread but against the teaching of the Pharisees and Sadducees.