July 27 The Holy Great Martyr Panteleimon; Our Father among the Saints Clement the Wonderworker, Bishop of Ohrid 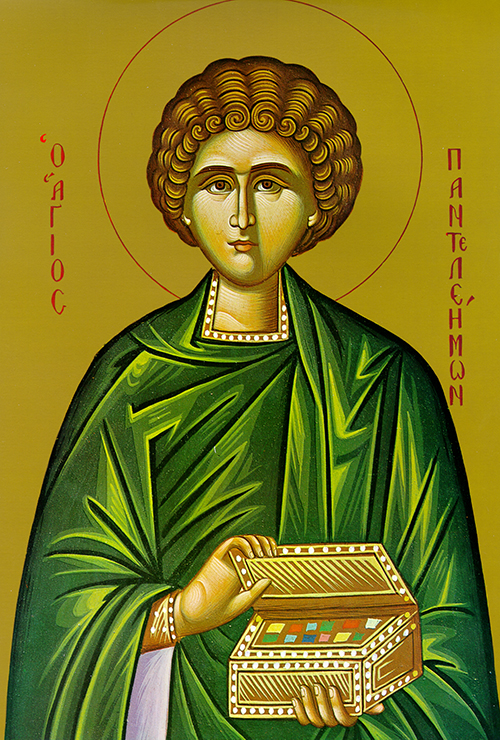 The holy great-martyr Panteleimon’s Christian mother passed away when he was just a child.  His pagan father sent him to study the medical sciences.  He became such a skilled physician that he was invited to become the doctor to the royals in Nicomedia.  His curiosity for Truth, Goodness and Beauty was not satiated by his studies though and he was led to meet and hear the wisdom of the monastics.  After raising a snake-bitten boy from the dead through the intercession of Christ, he was baptized.  He lived his life using both his human skills as a physician and his access to the miraculous as a Christian to heal all who came to him without cost.  His faith, and the jealousy of the other physicians in the region caused the emperor to torture and finally kill him.  His relics continue to heal many who approach them in faith.  He is the patron of soldiers and healers.

The memory of our holy father Clement the Wonderworker, archbishop of Ohrid in Illyricum (modern Bulgaria) was notable for his learning and his knowledge of sacred scriptures, and carried the light of faith to the Bulgarian people. With him are commemorated the holy bishops Gorazd, Nahum, Sabas, and Angelarius, who continued the work of Saints Cyril and Methodius in Bulgaria.

O holy victorious healer Panteleimon, intercede with the merciful God that He may grant our souls the forgiveness of sins.

You imitated the merciful Lord. By the grace to heal which He gave you, heal our souls through your effective prayers, O martyr of Christ our God. Drive away the demons from those who honor you and who sing in their faith: Save us, O Lord.

“To hate me is to hate my Father. Had I not performed such works among them as no one has ever done before, they would not be guilty of sin; but as it is, they have seen, and they go on hating me and my Father. However, this only fulfills the text in their law: ‘They hated me without cause.’ When the Paraclete comes, the Spirit of truth who comes from the Father – and whom I myself will send from the Father – he will bear witness on my behalf. You must bear witness as well, for you have been with me from the beginning.

Brothers and sisters: Let anyone who thinks he is standing upright watch out lest he fall! No test has been sent you that does not come to all men. Besides, God keeps his promise. He will not let you be tested beyond your strength. Along with the test he will give you a way out of it so that you may be able to endure it.

I am telling you, whom I love, to shun the worship of idols, and I address you as one addresses sensible people. You may judge for yourselves what I am saying. Is not the cup of blessing we bless a sharing in the blood of Christ? And is not the bread we break a sharing in the body of Christ? Because the loaf of bread is one, we, many though we are, are one body, for we all partake of the one loaf.

Look at Israel according to the flesh and see if those who eat the sacrifices do not share in the altar! What am I saying – that meat offered to an idol is really offered to that idol, or that an idol is a reality? No, I mean that the Gentiles sacrifice to demons and not to God, and I do not want you to become sharers with demons. You cannot drink the cup of the Lord and also the cup of demons. You cannot partake of the table of the Lord and likewise the table of demons. Do we mean to provoke the Lord to jealous anger? Surely we are not stronger than he!

At that time Jesus strictly ordered his disciples not to tell anyone that he was the Messiah. From then on Jesus [the Messiah] started to indicate to his disciples that he must go to Jerusalem and suffer greatly there at the hands of the elders, the chief priests, and the scribes, and to be put to death, and raised up on the third day. At this, Peter took him aside and began to remonstrate with him. “May you be spared, Master! God forbid that any such thing ever happen to you!” Jesus turned on Peter and said, “Get out of my sight, you satan! You are trying to make me trip and fall. You are not judging by God’s standards but by man’s.” Jesus then said to his disciples: “If a man wishes to come after me, he must deny his very self, take up his cross, and begin to follow in my footsteps.”