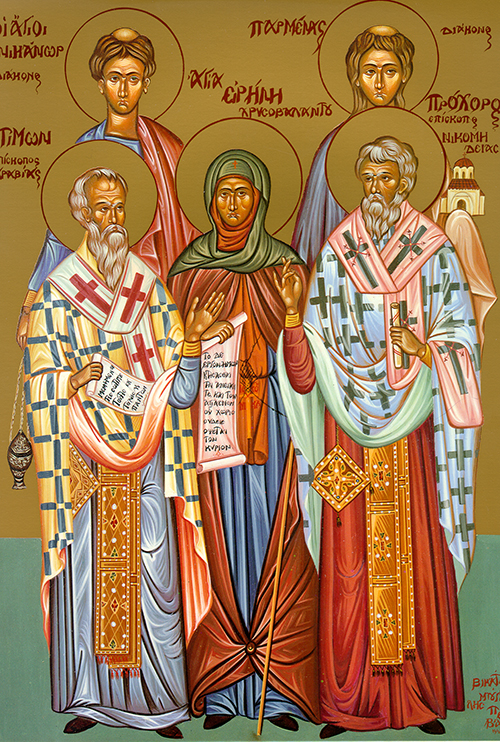 The holy apostles and deacons Prochorus, Nicanor, Timon, and Parmenas were of the seven chosen to be deacons in Acts 6:1 ff. and are described as “full of the Holy Spirit and wisdom.” The congregation of the disciples chose them, and the Apostles laid their hands on them, that they might minister in service of the needy. St. Prochorus accompanied the holy Apostle Peter, who made him bishop in the city of Nicomedia. After the Dormition of the Theotokos, Prochorus was a companion and coworker of the holy Apostle John the Theologian and was banished with him to the island of Patmos. There he wrote down the Book or Revelation concerning the final fate of the world. Upon returning to Nicomedia, St. Prochorus converted pagans to Christ in the city of Antioch, where he suffered martyrdom. St. Nicanor suffered the same day that the holy Protomartyr Stephen and many other Christians were killed by stoning. St. Timon was later appointed by the Apostles as bishop of the city of Bostra in Arabia and suffered from the Jews and pagans for preaching the Gospel. He was thrown into a furnace, but by the power of God he came out unharmed. The tradition of the Roman Church says that St. Timon died by crucifixion. St. Parmenas zealously preached Christ in Macedonia. He died after being afflicted with an illness. Some say that St. Parmenas suffered martyrdom under Trajan (98-117) in the final year of his reign.

O holy apostles, intercede with the all-merciful God, that He may grant us forgiveness for our sins.

You were deacons and eye-witnesses of the Word, chosen vessels of the faith and glorious saints. Today we take up the celebration of your memory and glorify you with a light and happy heart.

Brothers and sisters: If someone should say to you, “This was offered in idol worship,” do not eat it, both for the sake of the one who called attention to it on account of the conscience issue – not your own conscience but your neighbor’s. You may ask, why should my liberty be restricted by another man’s conscience? And why is it, if I partake thankfully, that I should be blamed for the food over which I gave thanks?

The fact is that whether you eat or drink – whatever you do – you should do all for the glory of God. Give no offense to Jew or Greek or to the church of God, just as I try to please all in any way I can by seeking, not my own advantage, but that of the many, that they may be saved. Imitate me as I imitate Christ.

I praise you because you always remember me and are holding fast to the traditions just as I handed them on to you. I want you to know that the head of every man is Christ; the head of a woman is her husband; and the head of Christ is the Father. Any man who prays or prophesies with his head covered brings shame on his head. Similarly, any woman who prays or prophesies with her head uncovered brings shame upon her head. It is as if she had had her head shaved. Indeed, if a woman will not wear a veil, she ought to cut off her hair. If it is shameful for a woman to have her hair cut off or her head shaved, it is clear that she ought to wear a veil. A man, on the other hand, ought not to cover his head, because he is the image of God and the reflection of his glory. Woman, in turn, is the reflection of man’s glory. Man was not made from woman but woman from man.

The Lord said to his disciples: “If a man wishes to come after me, he must deny his very self, take up his cross, and begin to follow in my footsteps. Whoever would save his life will lose it, but whoever loses his life for my sake will find it. What profit would a man show if he were to gain the whole world and destroy himself in the process? What can a man offer in exchange for his very self? The Son of Man will come with his Father’s glory accompanied by his angels. When he does, he will repay each man according to his conduct. I assure you, among those standing here there are some who will not experience death before they see the Son of Man in his kingship.”