June 1 The Holy Martyr Justin the Philosopher and his Companions 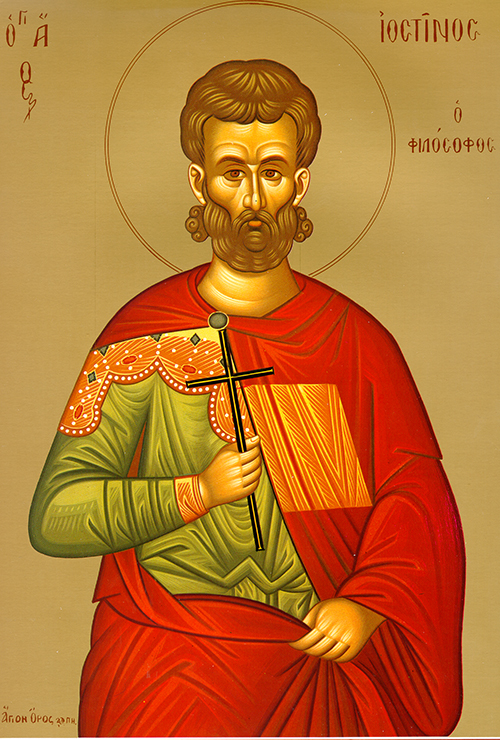 The holy martyr Justin was a philosopher who followed purely the true wisdom he had recognized in the truth of Christ. He instructed by his character, taught the truth of the faith and fought by his writings. When he presented his Apology for the Christian religion to the emperor Marcus Aurelius Antoninus (161-180) in Rome and confessed he himself was a Christian, St. Justin was condemned to death.

O Lord our God, your holy martyrs have deserved the crown of immortality on account of their good fight. Armed with your strength they have vanquished their persecutors and crushed Satan’s dreadful might. Through their supplications, O Christ our God, save our souls.

Embellished by the wisdom of your heavenly words, all of God’s Church tells the world of your holy life. Receiving a crown in return for your blood, you stand before Christ in the company of angels and pray unceasingly for all of us.

In those days, Paul gazed intently at the Sanhedrin. Then he said, “Brothers, to this day I have lived my life with a clear conscience before God.” At that, the high priest  Ananias ordered his attendants to strike Paul on the mouth. Paul said to him in rebuttal: “You are the one God will strike, you whitewashed wall! You sit there judging men according to the law, yet you violate the law yourself by ordering me to be struck!” At this, the attendants protested, “How dare you insult God’s high priest?” Paul answered: “My brothers, I did not know that he was the high priest. Indeed, Scripture has it, ‘You shall not curse a prince of your people!’”

Paul, it should be noted, was aware that some of them were Sadducees and some Pharisees. Consequently he spoke out before the Sanhedrin: “Brothers, I am a Pharisee and was born a Pharisee. I find myself on trial now because of my hope in the resurrection of the dead.” At these words, a dispute arose between the Pharisees and Sadducees which divided the whole assembly. (The Sadducees, of course, maintain that there is no resurrection and that there are neither angels nor spirits, while the Pharisees believe in all these things.) A loud uproar ensued. Finally, some scribes of the Pharisee party arose and declared emphatically: “We do not find this man guilty of any crime. If a spirit or an angel has spoken to him…” At this, the dispute grew worse and the commander feared they would tear Paul to pieces. He therefore ordered his troops to go down and rescue Paul from their midst and take him back to headquarters. That night the Lord appeared at Paul’s aide and said: “Keep up your courage! Just as you have given testimony to me here in Jerusalem, so must you do in Rome.”

The Lord said to his disciples: “All that the Father has belongs to me. That is why I said that what he will announce to you he will have from me. Within a short time you will lose sight of me, but soon after that you shall see me again.”

At this, some of his disciples asked one another: “What can he mean, ‘Within a short time you will see me’? And did he not say that he is going back to the Father?” They kept asking: “What does he mean by this ‘short time’? We do not know what he is talking about.” Since Jesus was aware that they wanted to question him, he said: “You are asking one another about my saying, ‘Within a short time you will lose sight of me, but soon after that you will see me.’ I tell you truly: you will weep and mourn while the world rejoices; you will grieve for a time, but your grief will be turned to joy. When a woman is in labor she is sad that her time has come. When she has borne her child, she no longer remembers her pain for joy that a man has been born into the world. In the same way, you are sad for a time, but I shall see you again; then your hearts will rejoice with joy no one can take away from you. On that day you will have no questions to ask me. I give you my assurance, whatever you ask the Father he will give you in my name.”