June 2 Our Father Among the Saints Nicephorus the Confessor 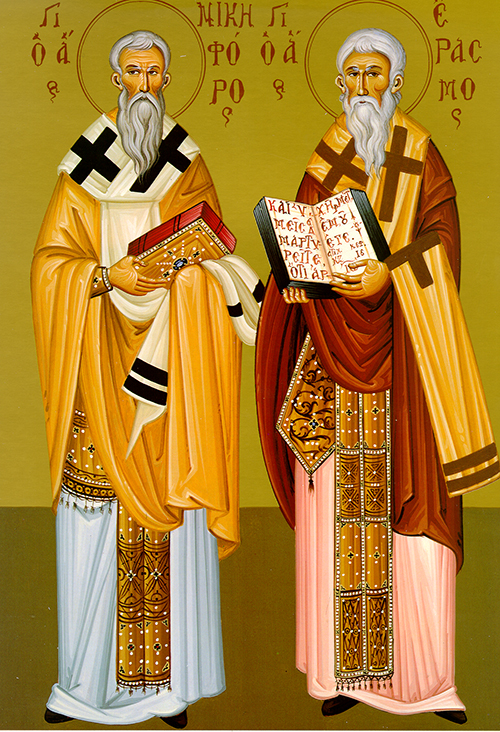 Our venerable father Nicephorus was a dignitary at the court of the Empress Irene (797-802). After embracing monasticism, he became widely known for his piety. He assumed the Patriarchal Throne of Constantinople in 806. He was a zealous defender of the holy icons. In 815, the iconoclast Emperor Leo (813-820) exiled him to Prokonnis, where he fell asleep in the Lord in the year 828.

The grace of your deep words and lofty teaching has become a ladder of virtue for us. You possessed a trumpet of the spirit, O father, and by it you announce spiritual teaching. You have taken up your abode in paradise, but still confound enemies with the might of your words. O blessed Nicephorus, beg Christ to forgive the sins of those who honor you.

Since you have received the crown of victory from God, save those who appeal to you in faith, O glorious Nicephorus, for you are a prince of Christ’s priests and a teacher for us.

In those days, King Agrippa and Bernice arrived in Caesarea and paid Festus a courtesy call. Since they were to spend several days there, Festus referred Paul’s case to the king. “There is a prisoner here,” he said, “whom Felix left behind in custody. While I was in Jerusalem the chief priests and the elders of the Jews presented their case against this man and demanded his condemnation. I replied that it was not the Roman practice to hand an accused man over before he had been confronted with his accusers and given a chance to defend himself against their charges. When they came here with me, I did not delay the matter. The very next day I took my seat on the bench and ordered the man brought in. His accusers surrounded him but they did not charge him with any of the crimes I expected. Instead they differed with him over issues in their own religion and about a certain Jesus who had died but who Paul claimed is alive.”

The Lord said to his disciples: “I give you my assurance, whatever you ask the Father, he will give you in my name. Until now you have not asked for anything in my name. Ask and you shall receive, that your joy may be full. I have spoken these things to you in veiled language. A time will come when I shall no longer do so, but shall tell you about the Father in plain speech. On that day you will ask in my name and I do not say that I will petition the Father for you. The Father already loves you, because you have loved me and have believed that I came from God. I did indeed come from the Father; I came into the world. Now I am leaving the world to go to the Father.”

His disciples exclaimed: “At last you are speaking plainly without talking in veiled language! We are convinced that you know everything. There is no need for anyone to ask you questions. We do indeed believe you came from God.”

Jesus answered them: “Do you really believe? An hour is coming–has indeed already come–when you will be scattered and each will go his way, leaving me quite alone. Yet I can never be alone; the Father is with me. I tell you all this that in me you may find peace.”