May 31 The Holy Apostle Hermes & The Holy Martyr Hermeas 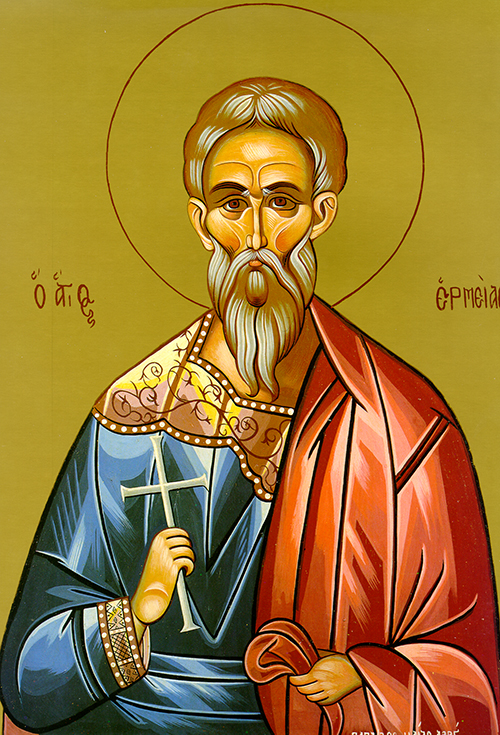 The holy apostle Hermes, bishop of Philipi, was a disciple of St. Paul. He endured much grief from the pagans for preaching the Gospel, but he died in peace.  According to tradition, he composed the istructive book “The Shepherd,” based on revelations from angels.

The holy martyr Hermeas, suffered during the persecution under the emperor Antoninus Pius (138-161). He was a soldier in the imperial army till old age. He was urged by his governor to offer sacrifice to the pagan gods in exchange for military honors and mercy from the emperor, but the old soldier turned him down, and bravely confessed his faith in Christ. He was tortured repeated, but all attempts to end the life of the saint failed. Finally he was beheaded by the governor’s own hand. Christians secretly buried the body of St. Hermeas, whose relics bestowed numerous healings.

O holy apostle Hermes, intercede with the all-merciful God that He may grant us forgiveness of our sins.

O Lord our God, your holy martyr Hermeas has deserved the crown of immortality on account of his good fight. Armed with your strength, he has vanquished his persecutors and crushed Satan’s dreadful might. Through his supplications, O Christ our God, save our souls.

You glimmered over the earth like a star, supporting Paul, that beam from the Divine Light who enlightens the whole world. Therefore, O Hermes, we venerate you.

You  fought well for Christ, finding strength and courage in your old age. Having overturned the plots of evil conceived by sinners, you were kept from the harm of poisoned food, O Hermeas. You cried out loudly: God is with me, and no one can prevail against me.

In those days, Paul gathered the men together and went through the rite of purification with them the next day. Then he entered the temple precincts to give notice of the day when the period of purification would be over, at which time the offering was to be made for each of them.

The seven-day period was nearing completion when some Jews from the province of Asia recognized Paul in the temple precincts and began to stir up the whole crowd there. They seized him, shouting: “Fellow Israelites, help us! This is the man who is spreading his teaching everywhere against our people, our law, and this sanctuary. He has even brought Greeks into the temple area and thus profaned this sacred place.” They had seen Trophimus, and Ephesian, with him in the city earlier, so they now assumed that Paul had brought him into the temple.

Before long the whole city was in turmoil. People came running from all sides. They seized Paul, dragged him outside the temple, and immediately closed the gates. Attempts were being made on his life when a report reached the commander of the cohort that all Jerusalem was rioting. Immediately the commander took his soldiers and centurions and charged down the rioters. As soon as the crowd caught sight of him and the soldiers, they stopped assaulting Paul.

The Lord said to his disciples: “I have told you all this to keep your faith from being shaken. Not only will they expel you from synagogues; a time will come when anyone who puts you to death will claim to be serving God!

“All this they will do to you because they knew neither the Father nor me. But I have told you these things that when their hour comes you may remember my telling you of them.

“I did not speak of this with you from the beginning because I was with you. Now that I go back to him who sent me, not one of you asks me, ‘Where are you going?’ Because I have had all this to say to you, you are overcome with grief. Yet I tell you the sober truth: It is much better for you that I go. If I fail to go, the Paraclete will never come to you. When he comes, he will prove the world wrong about sin, about justice, about condemnation. About sin – in that they refuse to believe in me; about justice – from the fact that I go to the Father and you can see me no more; about condemnation – for the prince of this world has been condemned. I have much more to tell you, but you cannot bear it now. When he comes, however, being the Spirit of truth he will guide you to all truth.”