June 19 The Holy Apostle Jude, Brother to the Lord 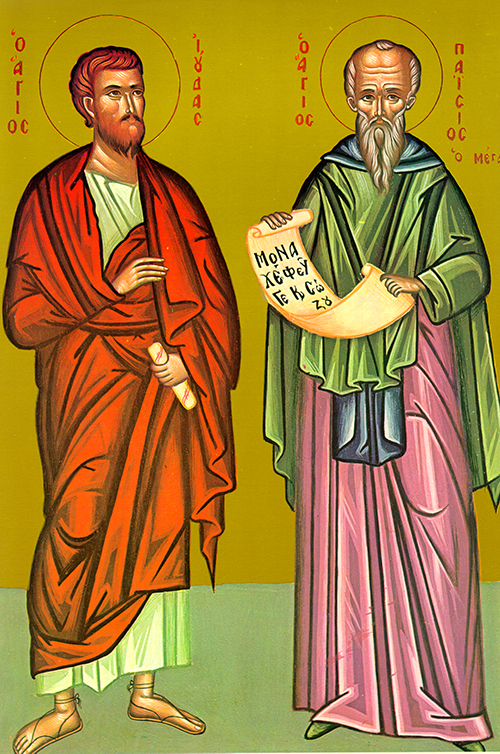 The holy apostle Jude was one of the Twelve apostles of Christ and descended from King David and Solomon, and was the son of Righteous Joseph the Betrothed by his first wife. Tradition says that when St. Joseph returned from Egypt, he began to divide his possessions among his sons. He wanted to allot a share to Christ the Savior, born miraculously and incorruptibly from the All-Pure Virgin Mary. Joseph’s other sons were opposed to this because Jesus was born of another mother. Only James, later called “The Brother of God,” offered to share his portion with Him. Later, Jude came to believe in Christ the Savior as the awaited Messiah, and he followed Him and was chosen as one of the twelve apostles. Mindful of his sin, the Apostle Jude considered himself unworthy to be called the Lord’s brother, and in his Epistle he calls himself merely the brother of James. The holy apostle Jude died as a martyr around the year 80 near Mt. Ararat in Armenia, where he was crucified and pierced by arrows.

We recognize that you are one of the Lord’s relatives and a strong martyr who for the faith trampled on lies. We have come to praise you in a sacred manner, O Jude, as we celebrate your holy memory and make our plea; Forgive our sins by the might of your prayers.

You were a chosen disciple with a firm purpose, an invincible pillar of the Church of Christ. You preached the word about Christ to the pagans, telling them to believe in the one God. Therefore, you have been exalted by Him and graced with the gift of healing. You cure the ills of those who hasten to you, O praiseworthy apostle Jude.

Jude, a servant of Jesus Christ and brother of James, to those who have been called by God; who have found love in God the Father and have been guarded safely in Jesus Christ. May mercy, peace, and love be yours in ever greater measure.

I was already fully intent on writing you, beloved, about the salvation we share. But now I feel obliged to write and encourage you to fight hard for the faith delivered once for all to the saints. Certain individuals have recently wormed their way into your midst, godless types, long ago destined for the condemnation I shall describe. They pervert the gracious gift of our God to sexual excess and deny Jesus Christ, our only master and Lord.

I wish to remind you of certain things, even though you may already be very well aware of them. The Lord first rescued his people from the land of Egypt but later destroyed those who refused to believe. There were angels, too, who did not keep to their own domain, who deserted their dwelling place. These the Lord has kept in perpetual bondage, shrouded in murky darkness against the judgment of the great day Sodom, Gomorrah, and the towns there abouts indulged in lust, just as those angels did; they practiced unnatural vice. They are set before us to dissuade us, as they undergo a punishment of eternal fire.

Similarly, these visionaries pollute the flesh; they spurn God’s dominion and revile the angelic beings. Even the archangel Michael, when his case with the devil was being judged – a dispute over Moses’ body– did not venture to charge him with blasphemy. He simply said, “May the Lord punish you.” These people, however, not only revile what they have no knowledge of but are corrupted through the very things they know by instinct, like brute animals.

The Lord said to his disciples: “He who obeys the commandments he has from  me is the man who loves me; and he who loves me will be loved by my Father. I too will love him and reveal myself to him.”

Judas (not Judas Iscariot) said to Jesus, “Lord, why is it that you will reveal yourself to us and not to the world?” Jesus answered: “Anyone who loves me will be true to my word, and my Father will love him; we will come to him and make our dwelling place with him. He who does not love me does not keep my words. Yet the word you hear is not mine; it comes from the Father who sent me.”

Brothers and sisters: There will be glory, honor, and peace for everyone who has done good, likewise the Jew first, then the Greeks. With God there is no favoritism.

Sinners who do not have the law will perish without reference to it; sinners bound by the law will be judged in accordance with it. For it is not those who hear the law who are just in the sight of God; it is those who keep it who will be declared just. When Gentiles who do not have the law keep it as by instinct, these men although without the law serve as a law for themselves. They show that the demands of the law are written in their hearts. Their conscience bears witness together with that law, and their thoughts will accuse or defend them on the day when, in accordance with the gospel I preach, God will pass judgment on the secrets of men through Christ Jesus.

At that time as Jesus was walking along the Sea of Galilee he watched two brothers, Simon known as Peter, and his brother Andrew, casting a net into the sea. They were fishermen. He said to them, “Come after me and I will make you fishers of men.” They immediately abandoned their nets and became his followers. He walked along farther and caught sight of two brothers, James and John, the sons of Zebedee. They too were in their boat, getting their nets in order with their father, Zebedee. He called them, and immediately they abandoned their boat and father to follow him. Jesus toured all of Galilee. He taught in their synagogues, proclaimed the good news of the kingdom, and cured the people of every disease and illness.