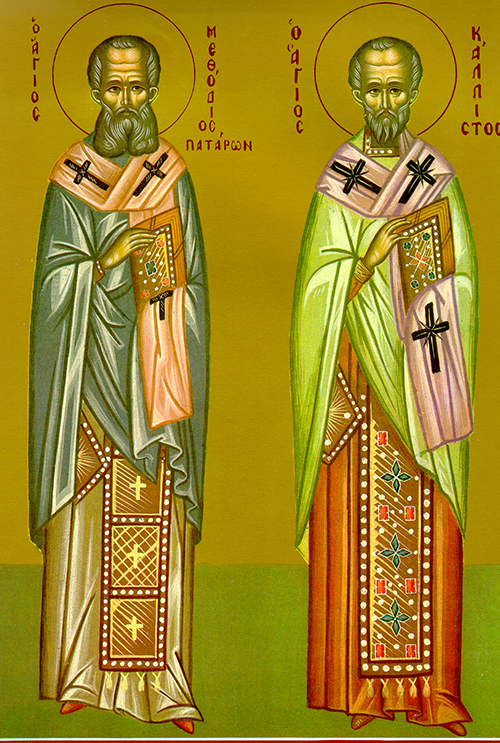 The Hieromartyr Methodius, bishop of Patara (Lycia in Asia Minor), was distinguished for his genuine monastic humility. Calmly and with mildness he instructed his flock, but he firmly  defended the purity of Orthodoxy and he energetically contended against heresies, especially the widespread heresy of the Origenists. He left behind a rich literary legacy: works in defense of Christianity against paganism, explications of Orthodox dogmas against the heresy of Origen, moral discourses, and explanations of Holy Scripture. St. Methodius was arrested by pagans, steadfastly confessed before them his faith in Christ, and he was sentenced to death by beheading in the year 312.

Your blood cries out from the earth like that of Abel, O wise saint, for you preached the Incarnation with fearsome boldness. You shamed the lies of Origen, O father Methodius, and now you have been admitted to the court of heaven. Beg Christ our God to save our souls.

You were a priest and a mystic of the Holy Trinity. You preached divine decrees which surpass comprehension. You are strength for the faithful, O Methodius. You prevailed against evil plots, becoming a martyred priest in your blood for the faith. As you stand before Christ, pray for our salvation.

Brothers and sisters: Are you not aware (I am speaking to men who know what law is), that the law has power over a man only so long as he lives? For example, a married woman is bound to her husband by law while he lives, but if he dies she is released from the law regarding husbands. She will be called an adulteress if, while her husband is still alive, she gives herself to another. But if her husband dies she is freed from that law, and does not commit adultery by consorting with another man. In the same way, my brothers, you died to the law through the body of Christ, that you might belong to that Other who was raised from the dead, so that we might bear fruit for God. When we were in the flesh, the sinful passions roused by the law worked in our members and we bore fruit for death. Now we have been released from the law – for we have died to what bound us – and we serve in the new spirit, not the antiquated letter.

Did this good thing then become death for me? Not that either! Rather, sin, in order to be seen clearly as sin, used what was good to bring about my death. It did so that, by misusing the commandment, sin might go to the limit of sinfulness.

When Jesus saw the crowds, his heart was moved with pity. They were lying prostrate from exhaustion, like sheep without a shepherd. He said to his disciples: “The harvest is good but laborers are scarce. Beg the harvest master to send out laborers to gather his harvest.”

Then he summoned his twelve disciples and gave them authority to expel unclean spirits and to cure sickness and disease of every kind.

The names of the twelve apostles are these: first Simon, now known as Peter, and his brother Andrew; James, Zebedee’s son, and his brother John; Phillip and Bartholomew, Thomas and Matthew the tax collector; James, the son of Alphaeus, and Thaddeus; Simon the Zealot Party member, and Judas Iscariot, who betrayed the Lord. Jesus sent these men on mission as the Twelve, after giving them the following instructions:

“Do not visit pagan territory and do not enter a Samaritan town. Go instead after the lost sheep of Israel. As you go, make this announcement: ‘The reign of God is at hand!’ Cure the sick, raise the dead, heal the leprous, expel demons. The gift you have received, give as a gift.”