June 3 The Holy Martyr Lucillian and his Companions 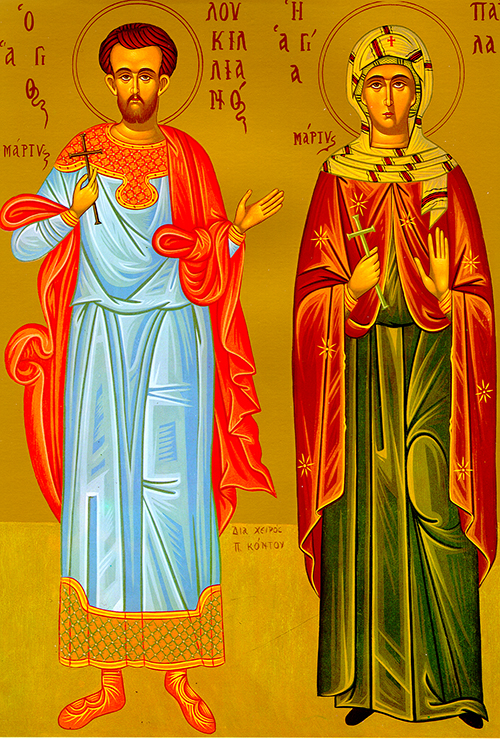 St. Lucillian was a pagan priest during the reign of the Roman emperor Aurelian (270-275). In his old age he was persuaded to see the falseness of the pagan religion, and with all his heart he turned to the faith in Christ the Savior and was baptized. Under the influence of his preachings, many pagans were converted to Christianity. Then certain Jews, seeing that he was spreading faith in Christ, reported the saint to the Nicomedia prefect, who urged the old man to return to idol worship. When St. Lucillian refused, they smashed his jawbone and beat him with rods and suspended him upside down, and then they locked him in prison. There he met four youths who were confessors of Christianity: Claudius, Hypatius, Paul, and Dionysius. They were brought to trial, and thrown into a red-hot furnace. Suddenly, rain fell and extinguished the flames, and the martyrs remained unharmed. The governor sentenced them to death, sending them to Byzantium to be executed. The holy youths were beheaded by sword, and the holy martyr Lucillian was nailed to a cross with many nails.

O Lord our God, your holy martyrs have deserved the crown of immortality on account of their good fight. Armed with your strength they have vanquished their persecutors and crushed Satan’s dreadful might. Through their supplications, O Christ our God, save our souls.

You approached the fire but were not burned, O courageous and wise martyr Lucillian. You possessed the cooling dew of God. You and your companions surpassed nature; therefore, we ask all of you to remember us.

In those days, when it was decided that we were to set sail for Italy, Paul and some other prisoners were handed over to a centurion named Julius from the cohort known as Augusta. We boarded a ship from Adramyttium bound for ports in the province of Asia, and set sail. With us in MAcedonia, Aristarchus of Thessalonica. The following day we put in at Sidon, where Julius kindly allowed Paul to visit some friends who cared for his needs. Then, putting out from Sidon, we sailed around the sheltered side of Cyprus because of the strong headwinds. We crossed the open sea off the coast of Cilicia and Pamphylia, and came to Myra in Lycia.

There The centurion discovered an Alexandria vessel bound for Italy, and he ordered us a board. For many days we made little headway, arriving at Cnidus only with difficulty. Since the winds would not permit us to continue our course, we sailed for Salmone and the shelter of Crete. Again with difficulty we moved along the coast to a place called Fair Havens, near the town of Lasea.

Much time had now gone by. The autumn fast was over, and with the lateness of the year sailing had to become hazardous. It was then that Paul uttered this warning: “Men, I can see that this voyage is bound to meet with disaster and heavy loss, not only to ship and cargo, but to our own lives as well.” However, the centurion preferred listening to the pilot and the shipowner to listening to Paul.

Since The harbor was not fit to pass the winter in, the majority preferred to put out to sea in hope of making Phoenix and spending the winter there. This was a Cretan port exposed on the southwest and the northwest. When a gentle south wind began to blow, they thought they had what they were looking for, so they weighed anchor and proceeded, hugging the coast of Crete. It was not long before a hurricane struck, the kind called a “northeaster.” Since the ship was caught up in it and could not head into the wind, we yielded and ran before it. We passed under the lee of a small island named Cauda and only with difficulty were able to gain control of the ship’s boat. They hoisted it aboard and then made use of cables to brace the ship itself. Because of their fear that they would be driven on the reef of Syrtis, they lowered the small anchor used for moving the ship and the ship was carried along. We were being pounded by the storm so violently that the next day some of the cargo was thrown over the side. On the third day they deliberately threw even the ship’s gear overboard. For many days neither the sun nor the stars were to be seen, so savagely did the storm rage. Toward the end, we abandoned any hope of survival.

All hands had gone without food for a long time when Paul stood up among them and said: “Men, you should have taken my advice and not set sail from Crete. Then you would not have incurred this disastrous loss. I urge you now to keep up your courage. None among you will be lost – only the ship. Last night a messenger of the God whose man I am and whom I serve, stood by me. ‘Do not be afraid, Paul,’ he said. ‘You are destined to appear before the emperor. Therefore, as a favor to you, God has granted safety to all who are sailing with you.’ So keep up your courage, men. I trust in God that it will all work out just as I have been told, though we still have to face shipwreck on some island.”

It was the fourteenth night of the storm, and we were still being driven across the Ionian Sea, when toward midnight the sailors began to suspect that land was near. They took a sounding and found a depth of twenty fathoms; after sailing on a short distance they again took a sounding and found it to be fifteen. For fear that we should be dashed against some rocky coast, they dropped four anchors from the stern and prayed for daylight. Then the sailors tried to abandon ship. Pretending that they were going to run out anchors from the bow of the ship, they let the ships boat down into the sea. Paul alerted the centurion and the soldiers to this: “If these men do not stay with the ship, you have no chance to survive.” At this, the soldiers cut the ropes and let the boat drift.

At dawn Paul urged all on board to take some food: “For fourteen days you have been in constant suspense; you have gone hungry-eaten nothing. Now I urge you to take some food, which will give you strength to survive. Not one of you shall lose a hair of his head.” When he had said this he took some bread, gave thanks to God before all of them, broke it, and began to eat it. This gave them new courage, and they too had something to eat. (In all, there were two hundred and seventy-six of us on board.) When they had had enough to eat, they lightened the ship further by throwing the wheat overboard.

With the coming of daylight, they did not recognize the land they saw. They could make out a bay with a sandy beach, however, so they plan to run the ship aground on it if possible. They cut loose and anchor and abandoned them to the sea. At the same time the untied the guy-ropes of the rudders, hoisted the force sail into the wind, and made for the beach; but the ship hit a sandbar and ran aground. The bow stuck fast and could not be budged, while the stern was shattered by the pounding of the sea. The soldiers thought at first of killing the prisoners so that none might swim away and escape; but because the centurion was anxious to Saint Paul, he posed their plan. Instead, he ordered those who could swim to jump overboard first and make for land. The rest were to follow, on planks, or on other debris from the ship. And this way all came safely ashore. Once ashore, we learned that the island was called Malta.

After Jesus had spoken to his disciples he raised up his eyes to heaven and said: “Father, as you have sent me into the world, so I have sent them into the world; I consecrate myself for their sake now, that they may be consecrated in truth. I do not pray for them alone. I pray also for those who will believe in me through their word, that all may be one as you, Father, are in me, and I in you; I pray that they may be one in us, that the world may believe that you sent me. I have given them the glory you gave me that they may be one, as we are one – I living in them, you living in me – that their unity may be complete. So shall the world know that you sent me, and that you loved them as you loved me. Father, all those you gave me I would have in my company where I am, to see this glory of mine which is your gift to me, because of the love you bore me before the world began. Just Father, the world has not known you, but I have known you; and these men have known that you sent me. To them I have revealed your name, and I will continue to reveal it so that your love for me may live in them, and I may live in them.”