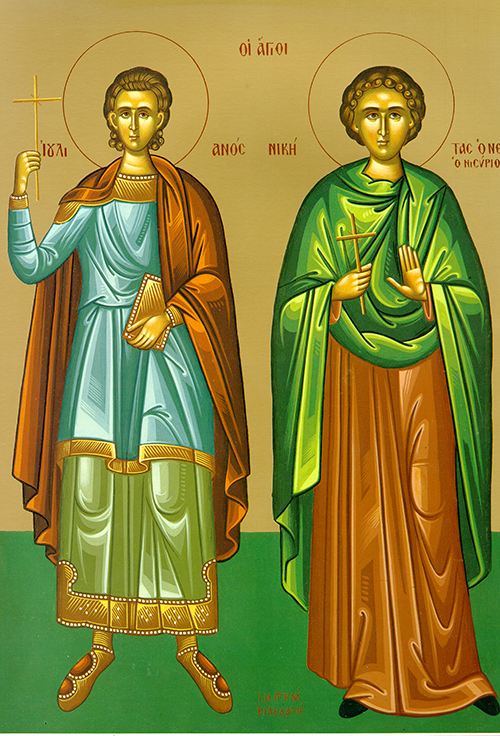 Julian was of noble and senatorial origin. He lived in Tarsus in Cilicia and suffered during the reign of Diocletian. Even though he was only eighteen years old when he was subjected to torture for the Faith, St. Julian was sufficiently educated and strengthened in Christian piety. The imperial deputy led him from town to town for an entire year, torturing him and all the while trying to persuade him to deny Christ. Julian’s mother followed her son at a distance. When the deputy seized Julian’s mother and sent her to counsel her son to deny Christ, she spoke to him for three days in prison, giving him the opposite advice, teaching him and encouraging him not to lose heart but to go to his death with thanksgiving and courage. The torturers then sewed Julian in a sack with sand, scorpions, and serpents and cast the sack into the sea. Julian’s mother also died under torture. St. Julian’s relics were thrown onto the shore by the waves, and the faithful translated them to Alexandria and buried them honorably in the year 290.

O Lord our God, your martyr Julian has deserved the crown of immortality on account of his good fight. Armed with your strength, he has vanquished his persecutors and crushed Satan’s dreadful might. Through his supplications, O Christ our God, save our souls.

Today let us praise Julian, an invincible warrior in holiness, the herald and soldier of truth. Let us cry out to him: Intercede with Christ our God for our salvation.

Brothers and sisters: We know that the law is spiritual, whereas I am weak flesh sold into the slavery of sin. I cannot even understand my own actions. I do not do what I want to do but what I hate. When I act against my own will, by that very fact I agree that the law is good. This indicates that it is not I who do it but sin which resides in me. I know that no good dwells in me, that is, in my flesh; the desire to do right is there but not the power. What happens is that I do, not the good I will to do, but the evil I do not intend. But if I do what is against my will, it is not I who do it, but sin which dwells in me. This means that even though I want to do what is right, a law that leads to wrongdoings is always ready at hand. My inner self agrees with the law of God, but I see in my body’s members another law at war with the law of my mind; this makes me the prisoner of the law of sin in my members. What a wretched man I am! Who can free me from this body under the power of death? All praise to God, through Jesus Christ our Lord! So with my mind I serve the law of God but with my flesh the law of sin.

The Lord said to his disciples: “Provide yourselves neither gold nor silver nor copper in your belts; no traveling bag, no change of shirt, no sandals, no walking staff. The workman, after all, is worth his keep.

“Look for a worthy person in every town or village you come to and stay with him until you leave. As you enter his home, bless it. If the home is deserving, your blessing will descend on it. If it is not, your blessing will return to you. If anyone does not receive you or listen to what you have to say, leave that house or town, and once outside it shake its dust from your feet. I assure you, it will go easier for the region of Sodom and Gomorrah on the day of judgment than it will for that town.”