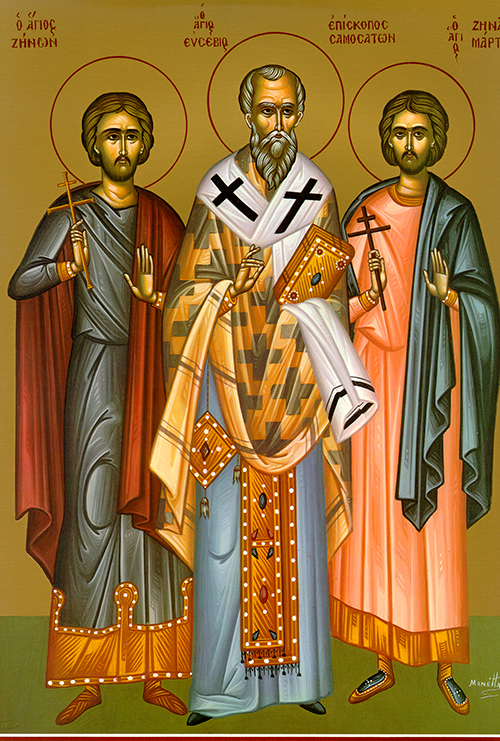 The holy martyr Eusebius, bishop of Samosata who, at the time of the Arian emperor, visited the Churches of God in the disguise of a soldier so that he might strengthen them in the Catholic faith. Then, under the emperor Valens, he was exiled to Thrace. When the peace of the Church returned, he was called back from his exile in the time of the emperor Theodosius. Finally, when he was again visiting churches, he was struck on the head by a roof tile thrown at him from above by an Arian woman and died a martyr at Dolicha in Syria in the year 379.

O holy priest-martyr Eusebius, you lent yourself to the apostles’ way of life and succeeded them on their throne. Inspired by God, you found the way to contemplation through the practice of virtue. Therefore, you became a perfect teacher of truth, fighting for the faith unto the shedding of your blood. Intercede with Christ our God that he may save our souls.

You lived your life in holiness and completed it with martyrdom. You extinguished the sacrificial fires of the idols, and now you have found favor with the Lord our God. Pray for our salvation, O father Eusebius.

Brothers and sisters: The law of the spirit, the spirit of life in Christ Jesus has freed you from the law of sin and death. The law was powerless because of its weakening by the flesh. Then God sent his Son in the likeness of sinful flesh as a sin offering, thereby condemning sin in the flesh, so that the just demands of the law might be fulfilled in us who live, not according to the flesh, but according to the spirit. Those who live according to the flesh are intent on the things of the flesh, those who live according to the spirit, on those of the spirit. The tendency of the flesh is toward death but that of the spirit is toward life and peace. The flesh in its tendency is at enmity with God, it is not subject to God’s law. Indeed, it cannot be; those who are in the flesh cannot please God. But you are not in the flesh; you are in the spirit, since the Spirit of God dwells in you. If anyone does not have the Spirit of Christ, he does not belong to Christ. If Christ is in you, the body is dead because of sin, while the spirit lives because of justice. If the Spirit of him who raised Jesus from the dead dwells in you, then he who raised Christ from the dead will bring your mortal bodies to life also, through his Spirit dwelling in you.

The Lord said to his disciples: “What I am doing is sending you out like sheep among wolves. You must be clever as snakes and innocent as doves. Be on your guard with respect to others. They will haul you into court, they will flog you in their synagogues. You will be brought to trial before rulers and kings, to give witness before them and before Gentiles on my account. When they hand you over, do not worry about what you will say or how you will say it. When the hour comes, you will be given what you are to say. You yourselves will not be the speakers; the Spirit of your Father will be speaking in you.