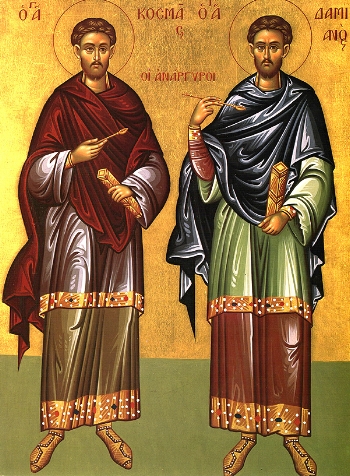 The transfer of the relics of the holy martyrs, unmercinaries, and Wonderworkers Cyrus and John from the city of Konopa, near Alexandria (where they suffered in the year 311) to the nearby village of Manuphin, took place in the year 412. This Egyptian village prompted fear in everyone since in a former time there was a pagan temple inhabited by evil spirits. Patriarch Theophilus (385-412) wanted to cleanse this place of demons, but he died. His wish was fulfilled by his successor, the holy Patriarch Cyril (412-444). As he prayed fervently, the patriarch had a vision of an angel of the Lord who commanded him to move the venerable relics of Saints Cyril and John to Manuphin. His Holiness Patriarch Cyril did the angel’s bidding and built a church at Manuphin in the name of the holy martyrs.

O Christ God, through the wonders of your holy martyrs, You have given us an invincible rampart. By their prayers disperse the council of unbelievers; strengthen the rule of your kingdom, for You alone are good and the Lover of Humankind.

After receiving the divine gift of healing, O holy ones, you ceaselessly work wonders in the world and invisibly remove all our sufferings bu the art of your hands. O Cyrus, filled with God’s wisdom, and O glorious John, you are truly divine healers.

Brothers and sisters: Scripture says: “No one who believes in him will be put to shame.” Here there is no difference between Jew and Greek; all have the same Lord, rich in mercy toward all who call upon him. [Scripture says:] “Everyone who calls the name of the Lord will be saved.”

But how shall they call on him in whom that have not believed? And how can they believe unless they have heard of him? And how can they hear unless there is someone to preach? And how can men preach unless they are sent? Scripture says, “How beautiful are the feet of those who announce good news!” But not all have believed the gospel. Isaiah asks, “Lord, who has believed what he has heard from us?” Faith, then, comes through hearing, and what is heard is the word of Christ. I ask you, have they not heard? Certainly they have, for the Psalmist says, “their voice has sounded over the whole earth, and their words to the limits of the world.” I put the question again, did Israel really not understand? First of all, Moses says, “I will make you jealous of those who are not even a nation: with a senseless nation I will make you angry.” Then Isaiah says boldly, “I was found by those who were not seeking me; to those who were not looking for me I revealed myself.” But of Israel Isaiah says, “All day long I stretched out my hand to an unbelieving and contentious people.”

The Lord said: “What comparison can I use to describe this breed? They are like children squatting in the town squares, calling to their playmates: ‘We piped you a tune but you did not dance! We sang you a dirge but you did not wail!’

“In other words, John appeared neither eating nor drinking, and people say, ‘He is mad!’ The Son of Man appeared eating and drinking, and they say, ‘This one is a glutton and drunkard, a lover of tax collectors and those outside the law!’ Yet time will prove where wisdom lies.”