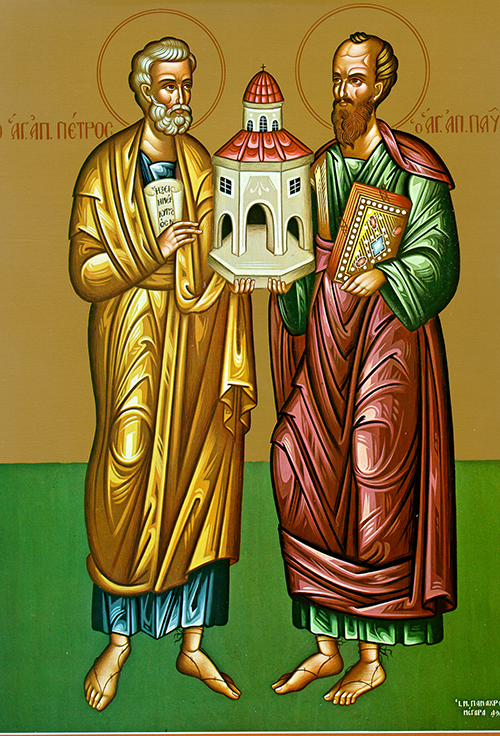 Simon, son of Jonah and brother of Andrew, was first among the disciples to confess that Jesus was Christ, the son of the living God. It was by Jesus that he was called Peter. Paul, Apostle of the Gentiles, preached Christ crucified to the Jews and the Greeks. Both announced the Gospel of Jesus Christ in faith and love in the city of Rome and died martyrs under the emperor Nero. Peter, as the tradition goes, was nailed to a cross with his head downward and was buried in the Vatican next to the Triumphal Way. Paul received his punishment from the sword and was interred at the Ostian Way. Their triumph, equal in honor and veneration, is celebrated by the whole world on this day.

Leaders of the apostles, teachers of the world, intercede with the Lord of All to grant peace to the world and abundant mercy to our souls.

Lord, You have received your steadfast and inspired preachers, the foremost of your apostles, into the enjoyment of Your good gifts and repose. You preferred their sufferings and death above any sacrifice. For You alone know the secrets of the heart.

Brothers and sisters: What anyone else dares to claim–I speak with absolute foolishness now–I, too, will dare. Are they Hebrews? So am I! Are they Israelites? So am I! Are they the seed of Abraham? So am I! Are they ministers of Christ? Now I am really talking like a fool–I am more; with my many more labors and imprisonments, with far worse beatings and frequent brushes with death. Five times at the hands of the Jews I received forty lashes less one; three times I was beaten with rods; I was stoned once, shipwrecked three times; I passed a day and a night on the sea. I traveled continually, endangered by floods, robbers, my own people, [and] the Gentiles; imperiled in the city, in the desert, at sea, by false brothers; enduring labor, hardship, many sleepless nights; in hunger and thirst and frequent fastings, in cold and nakedness. Leaving other sufferings unmentioned, there is that daily tension pressing on me, my anxiety for all the churches. Who is weak that I am not affected by it? Who is scandalized that I am not aflame with indignation? If I must boast, I will make a point of my weakness. The God and father of the Lord Jesus knows–blessed be he forever–that I do not lie. In Damascus the ethnarch of King Aretas was keeping close watch on the city in order to arrest me, but I was lowered in a basket through a window in the wall and escaped his hands.

I must go on boasting, however useless it may be, and speak of visions and revelations of the Lord. I know a man in Christ who, fourteen years ago, whether he was in or outside his body I cannot say, only God can say–a man who was snatched up to the third heaven. I know that this man–whether in or outside his body I do not know, God knows–was snatched up to Paradise to hear words which cannot be uttered, words which no man may speak. About this man I will boast; but I will do no boasting about myself unless it be about my weaknesses. And even if I were to boast it would not be folly in me because I would only be telling the truth.

But I refrain, lest anyone think more of me than what he sees in me or hears from my lips. As to the extraordinary revelations, in order that I might not become conceited I was given a thorn in the flesh, an angel of Satan to beat me and keep me from getting proud. Three times I begged the Lord that this might leave me. He said to me, “My grace is enough for you, for in weakness instead, that the power of Christ may rest upon you.

When Jesus came to the neighborhood of Caesarea Philippi he asked his disciples this question: “Who do people say that the Son of Man is?” They replied, “Some say John the Baptizer, other Elijah, still others Jeremiah or one of the prophets.” “And you,” Jesus said to them, “who do you say that I am?” Simon Peter answered, “You are the Messiah, the Son of the living God!” Jesus replied, “Blest are you Simon son of Jonah! No mere man has revealed this to you, but my heavenly Father. I for my part declare to you, you are ‘Rock,’ and on this rock I will build my church, and the jaws of death shall not prevail against it. I will entrust to you the keys of the kingdom of heaven. Whatever you declare bound on earth shall be bound in heaven; whatever you declare loosed on earth shall be loosed in heaven.”

Brothers and sisters: Do you know what Scripture says about Elijah, how he pleaded with God against Israel? “Lord, they have killed your prophets, they have torn down your altars; I alone am left and they are seeking my life.” How does God answer him? “I have left for myself seven thousand men who have not bowed the knee to Baal.” Just so, in the present time there is a remnant chosen by the grace of God. But if the choice is by grace, it is not because of their works – otherwise grace would not be grace. What then are we to say?Just this: Israel did not obtain what she was seeking, but those who were chosen did. The rest became blind, as Scripture says: “God gave them a spirit of stupor; blind eyes and deaf ears, and it is so to this day.” David says: “Let their table become a snare and a trap, a stumbling stone and a retribution: let their eyes be darkened so that they may not see. Bow down their back forever.”

On one occasion Jesus spoke thus: “Father, Lord of heaven and earth, to you I offer praise; for what you have hidden from the learned and clever you have revealed to the merest children. Father, it is true. You have graciously willed it so.”