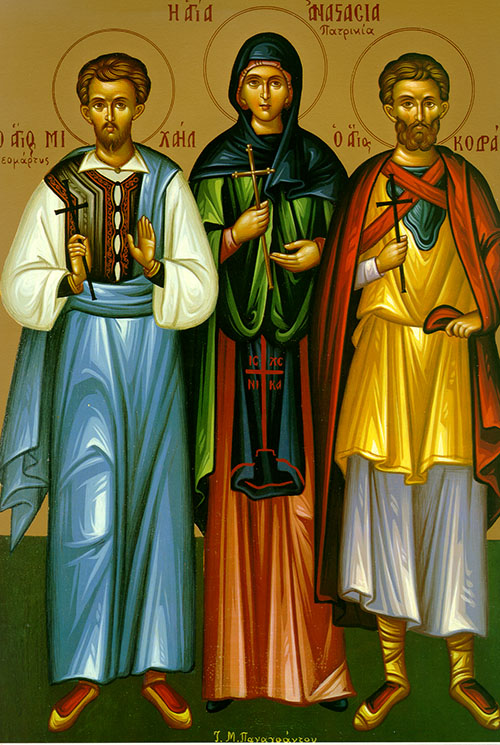 During the time of the persecutions of Christians, many of the faithful fled to the mountains and into the caves. So did the mother of Quadratus(or Codratus). She gave birth to him in the forest, but died shortly thereafter. By the Providence of God the infant Quadratus remained alive and was nourished in a miraculous manner: a cloud appeared over him, dropping sweet dew into his mouth. The childhood and youth of the saint was spent in the wilderness. When he was a young man, he chanced upon some Christians who enlightened him with the light of the true faith. Quadratus studied medicine and healed the sick with natural cures and more often, with the spiritual power of prayer, which had been with him since childhood. When a new persecution arose under Decius, Quadratis was brought to trial and cast into prison. Five companions joined him and confessed in the name of Christ. They were Cyprian, Dionysius, Anectus, Paul, and Cresens. They were tortured, but all stood firmly for the Faith. The martyrs were ordered to be thrown to the wild beasts to be torn apart. But the beasts would not touch them. Then the saints were tied behind chariots and dragged through the streets of the city. Finally, they were beheaded by sword. A spring of water gushed out of the ground at that spot, which is called “Quadratus” even today and is a reminder of the heroic deaths of these six holy innocents of Christ. They honorably suffered for the truth in the year 250, in Corinth.

By enduring violence you slew the proud enemy as you and your companions felt the pains of the sword. We celebrate your memory, holy Codratus, and we sing: All you unconquerable martyrs, remember us to the Lord.

This is the record of the descendants of Adam. When God created human beings, he made them in the likeness of God; he created them male and female. When they were created, he blessed them and named them mankind.

So do this, my son, to free yourself, since you have fallen into your neighbor’s power: Go, hurry, rouse your neighbor!

Free yourself like a gazelle from the hunter, or like a bird from the hand of the fowler.

Go to the ant, O sluggard, study her ways and learn wisdom;

For though she has no chief, no commander or ruler,

She procures her food in the summer, stores up her provisions in the harvest.

How long, O sluggard, will you lie there? When will you rise from your sleep?

A little sleep, a little slumber, a little folding of the arms to rest–

Scoundrels, villains, are they who deal in crooked talk.

Shifty of eye, feet ever moving, pointing with fingers,

They have perversity in their hearts, always plotting evil, sowing discord.

Therefore their doom comes suddenly; in an instant they are crushed beyond cure.

There are six things the Lord hates, yes seven are an abomination to him,

A heart that plots wicked schemes, feet that are quick to run to evil,

The false witness who utters lies, and the one who sows discord among kindred.