Mar. 15 The Holy Martyr Agapius and the Six Martyrs with him 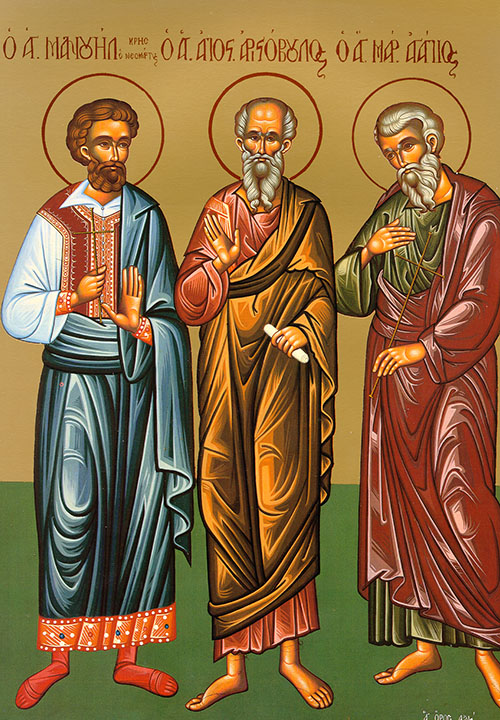 The holy martyr Agapius and his companions: the holy martyrs Timolaus, Dionysius, Pausis, Romulus, Alexander, and another Alexander. They all suffered in Caesarea in Palestine at the hand of Prince Urban during the reign of the Emperor Diocletian. All seven were extremely young men, and none of them were Christians except Agapius. Neither were they baptized with water, but theirs was a baptism by blood. One day these seven young men were observing how Christians were being tortured: one in the fire, another on the gallows, and a third before wild beasts. Seeing with what great forbearance these Christians endures all their pain and suffering, these seven became inflamed with a zeal for Christ. They tied their hands behind their backs and came before Urban, saying: “We also are Christians.” The flattery and threats of Urban were in vain. These young men were joined by a distinguished citizen of this town, Agapius, who had previously suffered much for Christ. They became all the more inflamed in their faith and love for the Lord. All were beheaded in the year 303.

These seven martyrs endured much for the Trinity, and by grace they destroyed many scheming devils. By their spirit they have been joined to the holy ones. By their prayers, O Lord, be generous to us.

Then the Lord said to Noah: Go in the ark, you and all your household, for you alone in this generation have I found to be righteous before me. Of every clean animal, take with you seven pairs, a male and its mate; and of unclean animals, one pair, a male and its mate; likewise, every bird of the air, seven pairs, a male and a female, to keep their progeny alive over all the earth. For seven days from now I will bring rain down on the earth for forty days and forty nights, and so I will wipe out from the face of the earth every being that I have made. Noah complied, just as the Lord had commanded.

“Now, children, listen to me; happy are they who keep my ways.

Listen to instruction and grow wise, do not reject it!

Happy the one who listens to me, attending daily at my gates, keeping watch at my doorposts;

For whoever finds me finds life, and wins favor from the Lord;

But those who pass me by do violence to themselves; all who hate me love death.”

Wisdom has built her house, she has set up her seven columns;

She has prepared her meat, mixed her wine, yes, she has spread her table.

She has sent out her maidservants; she calls from from the heights out over the city:

“Let whoever is naive turn in here; to any who lack sense I say,

Come, eat of my food, and drink of the wine I have mixed!

Forsake foolishness that you may live; advance in the way of understanding.”

Whoever corrects the arrogant earns insults; and whoever reproves the wicked incurs opprobrium.

Do not reprove the arrogant, lest they hate you; reprove the wise, and they will love you.

Instruct the wise, and they become still wiser; teach the just, and they advance in learning.

The beginning of wisdom is fear of the Lord, and knowledge of the Holy One is understanding.

For by me your days will be multiplied and the years of your life increased.