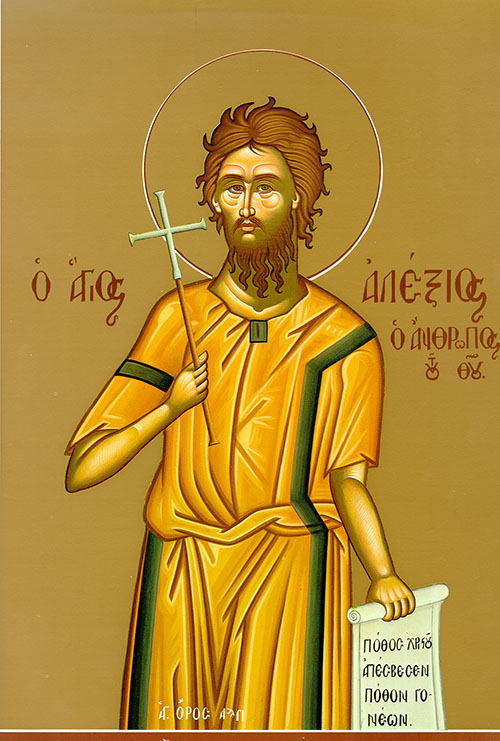 St. Alexis was born in Rome to the pious and poverty-loving parents Euphemianus and Aglais. The couple was childless for a long time and they constantly prayed to the Lord to grant them a child, so the Lord consoled them with the birth of their son Alexis. After he moved to Edessa, Alexis sold everything he had, distributed the money to the poor, and began to live near the church of the Most Holy Theotokos under a portico. The saint used a portion of the alms he received to buy bread and water, and he distributed the rest to the aged and infirm. St. Alexis dwelt in Edessa for seventeen years. He secretly boarded a ship bound for Cilicia, intending to visit the church of St. Paul in Tarsus, but God ordained otherwise. A storm took the ship far to the west and it reached the coast of Italy. He journeyed to Rome and decided to live in his own house. Unrecognized, he humbly asked his father’s permission to settle in some corner of his courtyard. Euphemianus settled Alexis in a specially constructed cell and gave orders to feed him from his table. St. Alexis dwelt at the house of his parents for seventeen years and the Lord revealed to him the day of his death. Then the saint, taking paper and ink, wrote certain things that only his wife and parents would know. He also asked them to forgive him for the pain he had caused them.

Rich in poverty and clean of heart by virtue, you adorned your life by partaking in the passion. With a clean conscience you took up fasting and persevered in prayer like an angel. You glowed like the sun on the world, O most blessed Alexis.

You made your parents’ home that of a stranger, and you lived in its shelter as a beggar. When you passed from this life you were crowned in glory, and your reputation has become magnificent on earth. Rejoice, O Alexis, man of God and joy of angels.

In the six hundredth year of Noah’s life, in the second month, on the seventeenth day of the month: on that day

All the fountains of the great abyss burst forth

And the floodgates of the sky were opened.

For forty days and forty nights heavy rain poured down on the earth.

The flood continued upon the earth for forty days. As the waters increased, they lifted the ark, so that it rose above the earth. The waters swelled and increased greatly on the earth, but the ark floated on the surface of the waters. Higher and higher on the earth the waters swelled, until all the highest mountains under heaven were submerged. The waters swelled fifteen cubits higher than the submerged mountains. All creatures that moved on earth perished: birds, tame animals, wild animals, and all that teemed on the earth, as well as all humankind/ Everything on dry land with the breath of life in its nostrils died. The Lord wiped out every being on earth: human beings and animals, the crawling things and the birds of the air; all were wiped out from the earth. Only Noah and those with him in the ark were left.

And when the water had swelled on the earth for one hundred and fifty days, God remembered Noah and all the animals, wild and tame, that were with him in the ark. So god made a wind sweep over the earth, and the waters began to subside. The fountains of the abyss and the floodgates of the sky were closed, and the downpour from the sky was held back. Gradually the waters receded from the earth. At the end of one hundred and fifty days, the waters had so diminished that, in the seventh month, on the seventeenth day of the month, the ark came to rest on the mountains of Ararat.

The Proverbs of Solomon: A wise son gives his father joy, but a foolish son is a grief to his mother.

Ill-gotten treasures profit nothing, but justice saves from death.

The Lord does not let the just go hungry, but the craving of the wicked he thwarts.

The slack hand impoverishes, but the busy hand brings riches.

A son who gathers in summer is a credit; a son who slumbers during harvest, a disgrace.

Blessings are for the head of the just; but the mouth of the wicked conceals violence.

The memory of the just serves as blessing, but the name of the wicked will rot.

A wise heart accepts commands, but a babbling fool will be overthrown.

Whoever walks honestly walks securely, but one whose ways are crooked will fare badly.

One who winks at a fault causes trouble, but one who frankly reproves promotes peace.

Hatred stirs up disputes, but love covers all offenses.

On the lips of the intelligent is found wisdom, but a rod for the back of one without sense.

The wise store up knowledge, but the mouth of a fool is imminent ruin.

The wealth of the rich is their strong city; the ruin of the poor is their poverty.

The labor of the just leads to life, the gains of the wicked, to futility.

Whoever follows instruction is in the path to life, but whoever disregards reproof goes astray. Whoever conceals hatred has lying lips, and whoever spreads slander is a fool.

Where words are many, sin is not wanting; but those who restrain their lips do well.

Choice silver is the tongue of the just; the heart of the wicked is of little worth.

The lips of the just nourish many, but the fools die for want of sense.

It is the Lord’s blessing that brings wealth, and no effort can substitute for it.