Mar. 24 Our Venerable Father Zachary / Pre-festive Day of the Annunciation 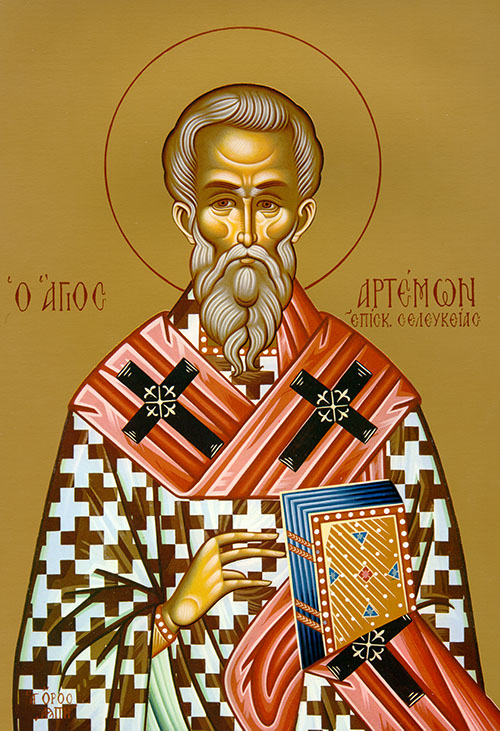 Our venerable father Zachary was born in Egypt. His father left his family to become a monk and took Zachary with him. God gave him great gifts of grace; he was a great light among the monks in the desert, and went to his peace in the Lord at an early age.

Today is the prelude of joy for the whole world. Let us then anticipate the feast and celebrate, for, behold, Gabriel is on his way with the glad tidings for the Virgin. He is about to cry out in fear and amazement: Rejoice, O woman full of grace, the Lord is with you!

You are the beginning of salvation for all those born on earth, O virgin Theotokos. The prince of the heavenly legions has been sent to stand before you with a message of joy. We join the chorus and call out to you: Rejoice, O Bride and Maiden ever-pure.

These are the clans of Noah’s sons, according to their origins and by their nations. From these the nations of the earth branched out after the flood.

The whole world had the same language and the same words. When they were migrating from the east, they came to a valley in the land of Shinar and settled there. They said to one another, “Come, let us mold bricks and harden them with fire.” They used bricks for stone, and bitumen for mortar. Then they said, “Come, let us build ourselves a city and a tower with its top in the sky, and so make a name for ourselves; otherwise we shall be scattered all over the earth.”

The Lord came down to see the city and the tower that the people had built. Then the Lord said: If now, while they are one people and all have the same language, they have started to do this, nothing they presume to do will be out of their reach. Come, let us go down and there confuse their language, so that no one will understand the speech of another. So the Lord scattered them from there over all the earth, and they stopped building the city. That is why it was called Babel, because there the Lord confused the speech of all the world. From there the Lord scattered them over all the earth.

The light of the just gives joy, but the lamp of the wicked goes out.

The stupid sow discord by their insolence, but wisdom is with those who take counsel.

Wealth won quickly dwindles away, but gathered little by little, it grows.

Hope deferred makes the heart sick, but a wish fulfilled is a tree of life.

Whoever despises the word must pay for it, but whoever reveres the command will be rewarded.

The teaching of the wise is a fountain of life, turning one from the snares of death.

Good sense brings favor, but the way of the faithless is their ruin.

The shrewd always act prudently but the foolish parade folly.

A wicked messenger brings on disaster, but a trustworthy envoy is a healing remedy.

Poverty and shame befall those who let go of discipline, but those who hold on to reproof receive honor.

Desire fulfilled delights the soul, but turning from evil is an abomination to fools.

Walk with the wise and you become wise, but the companion of fools fares badly.

Misfortune pursues sinners, but the just shall be recompensed with good.

The good leave an inheritance to their children’s children, but the wealth of the sinner is stored up for the just.

The tillage of the poor yields abundant food, but possessions are swept away for lack of justice.

Whoever spares the rod hates the child, but whoever loves will apply discipline.

When the just eat, their hunger is appeased; but the belly of the wicked suffers want.

Wisdom builds her house, but Folly tears her down with her own hands.

Those who walk uprightly fear the Lord, but those who are devious in theur ways spurn him.

In the mouth of the fool is a rod for pride, but the lips of the wise preserve them.

Where there are no oxen, the crib is clean; but abundant crops come through the strength of the bull.

A trustworthy witness does not lie, but one who spouts lies makes a lying witness.

The scoffer seeks wisdom in vain, but knowledge is easy for the intelligent.