Mar. 29 Our Venerable Father Mark, Bishop of Arethusa & the Deacon Cyril and his Companions 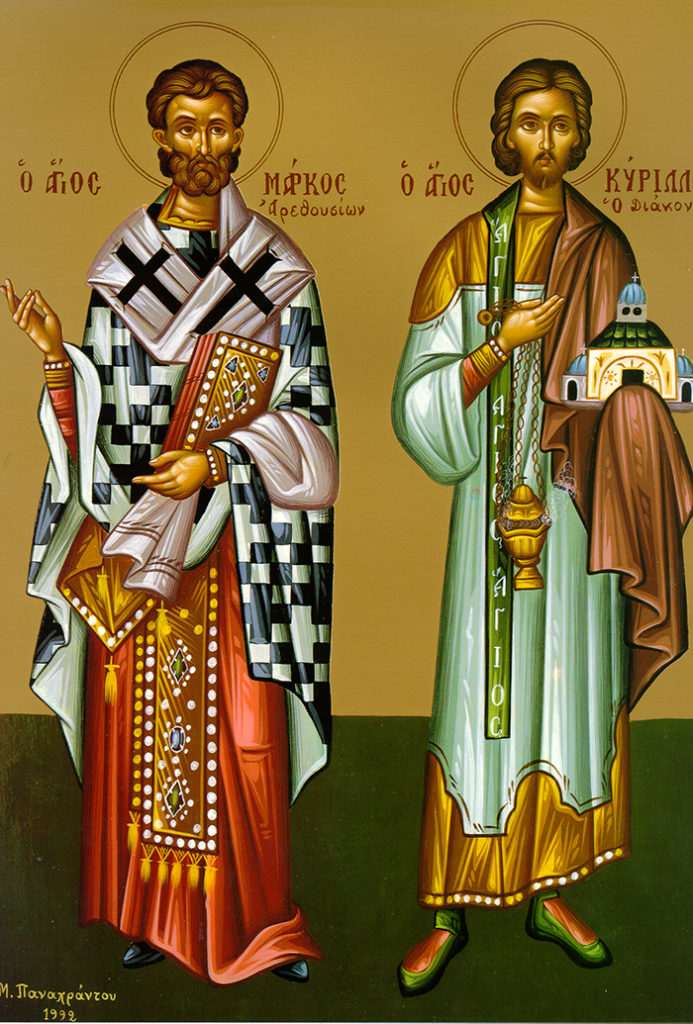 Hieromartyr Mark, Bishop of Arethusa, suffered for his faith in Christ under the emperor Julian the Apostate (361-363). By order of the emperor Constantine, St. Mark had once destroyed a pagan temple and built a Christian church. When Julian came to the throne, he persecuted Christians and tried to restore paganism. Some citizens of Arethusa renounced Christianity and became pagans. The St. Mark’s enemies decided to take revenge on him. The old bishop hid himself from the persecutors at first, but then he gave himself up when he learned that the pagans had tortured many people in their search for him. St. Gregory the Theologian describes the sufferings of St. Mark in his First Oration against Julian.

The historian Theodoritus relates that during the reign of St. Constantine the Great, St. Cyril destroyed many idols and pagan temples in Heliopolis, Phoenicia. He was put to death for this during the reign of Julian the Apostate. During this time the pagans killed many Christians in the Palestinian cities of Ascalon, and Gaza: priests, women and children who had dedicated themselves to God. The holy martyrs received crowns of victory in the Kingdom of Heaven, and the torturers also received their just recompense: eternal torment in Hell.

Having become a splendor of truth, you have illumuned the very ends of the earth. For this reason, we bless you, O martyred priests.

After these things the word of the Lord came to Abram in a vision, “Do not be afraid, Abram, I am your shield; your reward shall be very great.” But Abram said, “O Lord God, what will you give me, for I continue childless, and the heir of my house is Eliezer of Damascus?” And Abram said, “You have given me no offspring, and so a slave born in my house is to be my heir.” 4 But the word of the Lord came to him, “This man shall not be your heir; no one but your very own issue shall be your heir.”  He brought him outside and said, “Look toward heaven and count the stars, if you are able to count them.” Then he said to him, “So shall your descendants be.” And he believed the Lord; and the Lord reckoned it to him as righteousness.

Then he said to him, “I am the Lord who brought you from Ur of the Chaldeans, to give you this land to possess.”  But he said, “O Lord God, how am I to know that I shall possess it?”  He said to him, “Bring me a heifer three years old, a female goat three years old, a ram three years old, a turtledove, and a young pigeon.”  He brought him all these and cut them in two, laying each half over against the other; but he did not cut the birds in two.  And when birds of prey came down on the carcasses, Abram drove them away.

As the sun was going down, a deep sleep fell upon Abram, and a deep and terrifying darkness descended upon him. Then the Lord said to Abram, “Know this for certain, that your offspring shall be aliens in a land that is not theirs, and shall be slaves there, and they shall be oppressed for four hundred years; but I will bring judgment on the nation that they serve, and afterward they shall come out with great possessions. As for yourself, you shall go to your ancestors in peace; you shall be buried in a good old age.

The lips of the wise spread knowledge; not so the minds of fools.

The sacrifice of the wicked is an abomination to the Lord, but the prayer of the upright is his delight.

The way of the wicked is an abomination to the Lord, but he loves the one who pursues righteousness.

There is severe discipline for one who forsakes the way, but one who hates a rebuke will die.

Sheol and Abaddon lie open before the Lord, how much more human hearts!

Scoffers do not like to be rebuked; they will not go to the wise.

A glad heart makes a cheerful countenance, but by sorrow of heart the spirit is broken.

The mind of one who has understanding seeks knowledge, but the mouths of fools feed on folly.

All the days of the poor are hard, but a cheerful heart has a continual feast.

Better is a little with the fear of the Lord than great treasure and trouble with it.

Better is a dinner of vegetables where love is than a fatted ox and hatred with it.

Those who are hot-tempered stir up strife, but those who are slow to anger calm contention.

The way of the lazy is overgrown with thorns, but the path of the upright is a level highway.