May 11 The holy Cyril and Methodius, Equal to the Apostle, Teachers of the Slavs 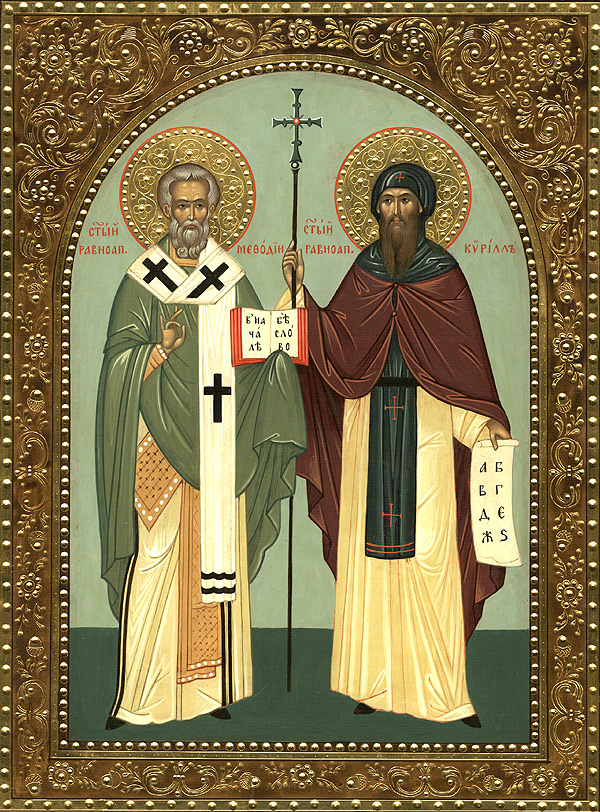 Our holy fathers Cyril and Methodius, Apostles to the Slavs, were brothers born in Thessalonica in the first half of the ninth century. Since Methodius had been a soldier among the Slavs in Macedonia, he was considered an excellent candidate for carrying the Gospel to the Khazars. After the invention of the first Slavonic alphabet by Cyril, they began translating the Gospel and liturgical books into Church Slavonic. At the invitation of Prince Rastislav, they went to Moravia to spread the Faith. They went to Rome at the invitation of the pope, and Cyril fell ill and died there on Feb. 14, 869. Methodius then returned to Moravia and continued his apostolic work until his death on April 6, 885.

As equals to the apostles and teachers of the Slavs, beg the Master of all to confirm us in the faith and in unity of heart, O Cyril and Methodius. Beg Him for peace in the world and mercy on our souls.

We honor those priests who gave us the Light, who opened the fountain of theology for us by translating the Holy Scriptures, thus starting a river from them that still runs today. We glorify you, O Cyril and Methodius, who stand in heaven before the throne of the Lord on high, and who pray so fervently for all of us.

Brothers and sisters: Obey your leaders and submit to them, for they keep watch over you as men who must render an account. So act that they may fulfill their task with joy, not with sorrow, for that would be harmful to you. Pray for us; we are confident that we have a good conscience, wishing, as we do, to act rightly in every respect. I especially ask your prayers that I may be restored to you very soon. May the God of peace, who brought up from the dead the great Shepherd of the sheep by the blood of the eternal covenant, Jesus our Lord, furnish you with all that is good, that you may do his will. Through Jesus Christ may he carry out in you all that is pleasing to him. To Christ be the glory forever! Amen.

In those days, Paul and Barnabas fled to the Lycaonian towns of Lystra and Oebre and to the surrounding country, where they continued to proclaim the good news.

At Lystra there was a man who was lame from birth; he used to sit crippled, never having walked in his life. On one occasion he was listening to Paul preaching, and Paul looked directly at him and saw that he had the faith to be saved. Paul called out to him in a loud voice, “Stand up! On your feet!” The man jumped up and began to walk around. When the crowds saw what Paul had done, they cried out in Lycaonian, “Gods have come to us in the form of men!” They named Barnabas Zeus; and Paul they called Hermes, since he was the spokesman. Even the priests of the temple of Zeus, which stood outside the town, brought oxen and garlands to the gates because he wished to offer sacrifice to them with the crowds.

When the apostles Barnabas and Paul heard of this, they tore their garments and rushed out into the crowds. “Friends, why do you do this?” they shouted frantically. “We are only men, human like you. We are bringing you the good news that will convert you from just such follies as these to the living God, ‘the one who made heaven and earth and the sea and all that is in them.’ In past ages he let the Gentiles go their way. Yet in bestowing his benefits, he has not hidden himself completely, without a clue. From the heavens he sends down rain and rich harvests; your spirit he fills with food and delight.” Yet even with a speech such as this, they could scarcely stop the crowds from offering sacrifice to them.

At that time the feast of Tabernacles was half over by the time Jesus went into the temple area and began to teach. The Jews were filled with amazement and said, “how did this man get his education when he had no teacher?”

This was Jesus‘s answer: “My doctrine is not my own; it comes from him who sent me. Any man who chooses to do his will will know about this doctrine – namely, whether it comes from God or is simply spoken on my own. Whoever speaks on his own is bent on self-glorification. The man who seeks glory for him who sent him is truthful; there is no dishonesty in his heart. Moses has given you the law, has he not? Yet not one of you keeps it. Why do you look for a chance to kill me?”

“You are mad!” The crowd retarded. “Who wants to kill you?” Jesus answered: “I have performed a single work and you profess astonishment over it. Moses gave you circumcision though it did not originate with Moses but with the patriarchs. And so, even on a Sabbath you circumcise a man. If a man can be circumcised on the sabbath to prevent a violation of Mosaic law, how is it that you are angry with me for curing a whole man on the Sabbath? Stop judging by appearances and make an honest judgment.”

This led some of the people of Jerusalem to remark: “Is this not the one they want to kill? Here he is speaking in public and they don’t say a word to him! Perhaps even the authorities have decided that this is the Messiah. Still, we know where this man is from. When the Messiah comes, no one is supposed to know his origins.”

At this, Jesus, who was teaching in the temple area, cried out: “So you know me, and you know my origins? The truth is, I have not come of myself. I was sent by One who has the right to send, and him you do not know. I know him because it is from him I come: he sent me.”

At this they tried to see him, but no one laid a finger on him because his hour had not yet come.