May 12 Our Fathers among the saints Epiphanius, Bishop of Cyprus & Germanus, Patriarch of Constantinople 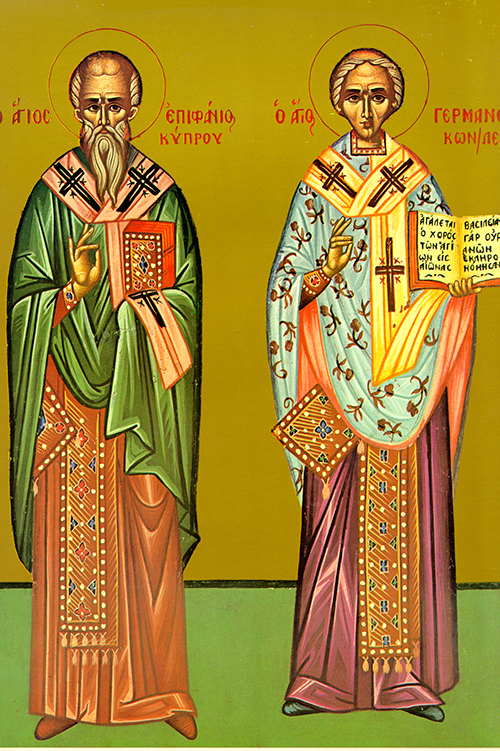 St. Epiphanius, Bishop of Cyprus, “a last relic of ancient piety,” as St. Jerome calls him, lived during the fourth century in Phoenicia. The Roman empress Honoria was his sister. He was of Jewish descent, and in his youth he received a fine education. He was converted to Christianity after seeing how a monk named Lucian gave away his clothing to a poor person. Struck with the monk’s compassion, Epiphanius asked to be instructed in Christianity.

St. Germanus, Patriarch of Constantinople, was born at Constantinople in the seventh century. His father, a prominent senator, was killed by order of the emperor Constantine Pogonatos (668-685). Because of the sanctity of his life, Germanus was made bishop in the city of Cyzicus. St. Germanus rose up in defense of the Orthodox Faith against the iconoclast heretics. He was later made patriarch of Constantinople. St. Germanus continued to stand up against the iconoclasts and to their spokesman, the heretical emperor Leo III the Isaurian (717-741). He went to a monastery, where he spent the remainder of his life. The holy Patriarch Germanus died in the year 740, at age ninety-five, and was buried in the Chora monastery in Constantinople. Afterwards, his relics were transferred to France.

O faithful, let us sing a worthy hymn of praise in honor of the two glorious bishops, Epiphanius and Germanus. They enlightened the minds of those without faith, and to the faithful they presented God’s great mysteries, explaining true belief with great wisdom.

In those days, Peter proceeded to address (the friends and family of Cornelius) in these words: “I begin to see how true it is that God shows no partiality. Rather, the man of any nation who fears God and acts uprightly is acceptable to him. This is the message he has sent to the sons of Israel, the good news of peace proclaimed through Jesus Christ who is Lord of all. I take it you know what has been reported all over Judea about Jesus of Nazareth, beginning in Galilee with the baptism John preached; of the way God anointed him with the Holy Spirit and power. He went about doing good works and healing all who were in the grip of the devil, and God was with him. We are witnesses to all that he did in the land of the Jews and in Jerusalem. They killed him, finally, hanging him on a tree, only to have God raise him up on the third day and grant that he be seen, not by all, but only by such witnesses as had been chosen beforehand by God–by us who ate and drank with him after he rose from the dead. He commissioned us to preach to the people and to bear witness that he is the one set apart by God as judge of the living and the dead. To him all the prophets testify, saying that everyone who believes in him has forgiveness of sins through his name.”

The Lord said to the people coming to him: “I am the light of the world. No follower of mine shall ever walk in darkness; no, he shall possess the light of life.”

This caused the Pharisees to break in with: “You are your own witness. Such testimony cannot be valid.” Jesus answered: “What if I am my own witness? My testimony is valid nonetheless, because I know where I came from and where I am going; you know neither the one nor the other. You pass judgment according to appearances but I pass judgment on no man. Even if I do judge, that judgment of mine is valid because I am not alone: I have at my side the One who sent me – the Father. It is laid down in your law that evidence given by two persons is valid. I am one of those testifying in my behalf, the Father who sent me is the other.”

They pressed him: “And where is this ‘Father’ of yours?” Jesus replied: “You know neither me nor my Father. If you knew me, you would know my Father too.” He spoke these words while teaching at the temple treasury. Still, he went unapprehended, because his hour had not yet come.