May 17 The Holy Apostle Andronicus and his Companions 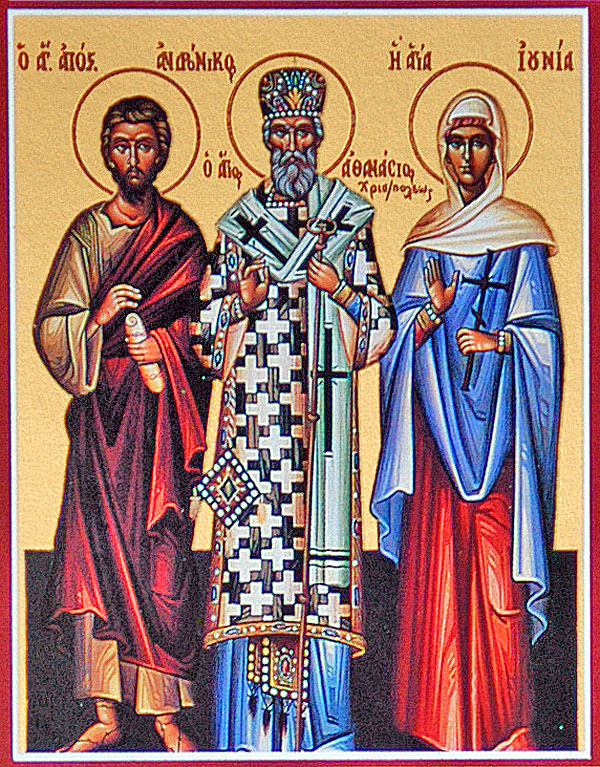 The holy apostle Andronicus was one of the Seventy Apostles. He and his companion Junias were kinsmen of St. Paul, as he mentions in Romans 16:17. St. Andronicus was Bishop of Pannonia but still he traveled preaching the gospel with Junias, bringing the word of God to pagans. Many pagans temples were closed and Christian churches opened in their stead. Andronicus and his companions were martyred for the Faith.

O holy apostles, intercede with the all-merciful God that He may grant is forgiveness of our sins.

We praise Andronicus, the apostle of Christ, the bright star who enlightened the pagans with understanding of God. We also praise Junias who labored along with him in bringing the Gospel to the pagans. We cry out: Implore God for us unceasingly.

In those days, Barnabas, Symeon known as Niger, Lucius of Cyrene, Manaen (who had been brought up with Herod the tetrarch), and Saul. On one occasion, while they were engaged in the liturgy of the Lord and were fasting, the Holy Spirit spoke to them: “Set apart Barnabas ans Saul for me to do the work for which I have called them.” Then, after they had fasted and prayed, they imposed hands on Paul and Barnabas and sent them off.

These two, sent forth by the Holy Spirit, went down to the port of Seleucia and set sail from there for Cyprus. On their arrival in Salamis they proclaimed the word of God in the Jewish synagogues, John accompanying them as an assistant. They traveled over the whole island as far as Paphos, where they came across a Jewish magician named Bar-Jesus who posed as a prophet. He was attached to the court of the proconsular governor Sergius Paulus, a man of intelligence who had summoned Barnabas and Saul and was anxious to hear the word of God. But Elymas – “the magician,” for that was what his name means – opposed them and sought to turn the governor away from the faith. Saul (also known as Paul) was filled with the Holy Spirit; he stared at Elymas and exclaimed: “You are an imposter and a thoroughgoing fraud, you son of Satan and enemy of all that is right! Will you never stop trying to make crooked the straight path of the Lord? The Lord’s hand is upon you even now! For a time you shall be blind, unable so much as to see the sun.” At once a musty darkness came over Elymas, and he groped about for someone to lead him by the hand. When the governor saw what had happened, he believed, so impressed was he by the teaching about the Lord.

The Lord said to the people coming to him: “I solemnly assure you, if a man is true to my word he shall never see death.” The Jews retorted, “Now we are sure you are possessed. Abraham is dead. The prophets are dead. Yet you claim, ‘A man shall never know death if he keeps my word.’ Surely you do not pretend to be greater than our father Abraham, who died! Or the prophets, who died! Whom do you make yourself out to be?”

Jesus answered: “If I glorify myself, that glory comes to nothing. He who gives me glory is the Father, the very one you claim for your God, even though you so not know him. But I know him. Were I to say I do not know him, I would be no better than you – a liar! Yes, I know him well, and I keep his word. Your father Abraham rejoiced that he might see my day. He saw it and was glad.”

At this the Jews objected: “You are not yet fifty! How can you have seen Abraham?” Jesus answered them: “I solemnly declare it: before Abraham came to be, I AM.” At that they picked up rocks to throw at Jesus, but he hid himself and slipped out of the temple precincts.