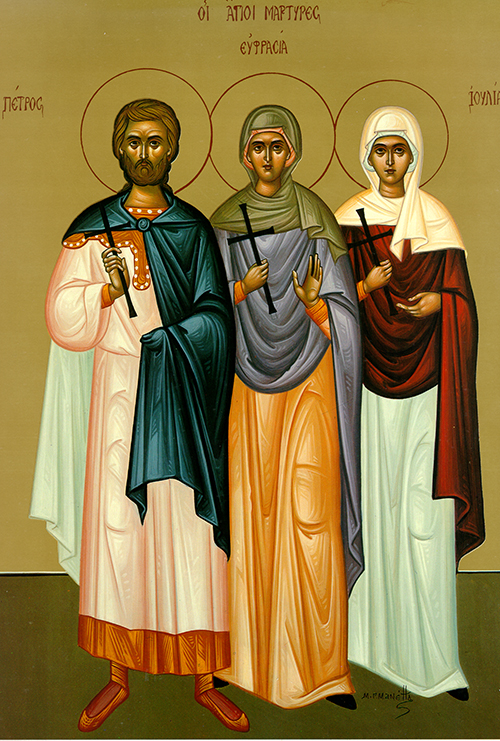 The Holy Martyr Theodotus and the Holy Seven Virgins Tecusa, Phaine, Claudia, Matrona, Julia, Alexandra and Euphrasia lived during the second half of the third century in the city of Ancyra, Galatia, and died as martyrs for Christ at the beginning of the fourth century. Saint Theodotus was an innkeeper and was married. The prefect of Ancyra issued a proclamation informing Christians that they were obliged to offer sacrifice to idols, and if they refused, they would be tortured and killed. Pagans would deliver Christians over to torture, and then divide up their property. Theodotus was not afraid to bury the remains of holy martyrs, either carrying them off secretly or ransoming them from the soldiers. When the Christian churches at Ancyra were destroyed and closed, the Divine Liturgy was celebrated in his inn. At this time, seven holy virgins died for Christ. The eldest, St. Tecusa, was the aunt of St. Theodotus. The holy virgins Tecusa, Phaine, Claudia, Matrona, Julia, Alexandra and Euphrasia had dedicated themselves to God from their youth, living in constant prayer, fasting, temperance and good deeds. Brought to trial as Christians, the holy virgins bravely confessed their faith in Christ before the prefect and were given over to torture, yet remained steadfast. A heavy stone was tied to the legs of each, and all seven of the holy virgins were drowned in a lake. The next night, St. Tecusa appeared to St. Theodotus in a dream asking him to retrieve her body and give her a Christian burial. St. Theodotus found all the bodies of the seven martyrs and brought them to church where they were buried. After this act, St. Theodotus gave his life for Christ.

You fought well by your martyrdom, O Theodotus, as did those who were martyred with you. You were crowned along with those martyred virgins. Implore Christ our God unceasingly for all of us.

In those days, from Paphos, Paul and his companions put out to sea and sailed to Perga in Pamphylia. There John left them and returned to Jerusalem. They continued to travel on from Perga to Antioch in Pisidia. On the sabbath day they entered the synagogue and sat down. After the reading of the law and of the prophets, the leading men of the synagogue sent this message to them: “Brothers, if you have any exhortation to address to the people, please speak up.”

So Paul arose, motioned to them for silence, and began: “Fellow Israelites and you others who reverence our God, listen to what I have to say! The God of the people Israel once chose our fathers. He made this people great during their sojourn in the land of Egypt, and with an outstretched arm he led them out of it. For forty years he put up with them in the desert: then he destroyed seven nations in the land of Canaan to give them that country as their heritage at the end of some four hundred and fifty years. Later on he set up judges to rule them until the time of the prophet Samuel. When they asked for a king, God gave them Saul son of Kish, of the tribe of Benjamin, who ruled for forty years. Then God removed him and raised up David as their king; on this behalf God testified, ‘I have found David son of Jesse to be a man after my own heart who will fulfill my every wish.’

“According to his promise, God has brought forth from this man’s descendants Jesus, a savior for Israel. John heralded the coming of Jesus by proclaiming a baptism of repentance to all the people of Israel.”

At that time Jesus looked up and caught sight of a vast crowd coming toward him. He said to Philip, “Where shall we buy bread for all these people to eat?” He knew well what he intended to do but he asked this to test Philip’s response. Philip replied, “Not even with two hundred days’ wages could we buy loaves enough to give each of them a mouthful!”

One of Jesus/ disciples, Andrew, Simon Peter’s brother, remarked to Jesus, “There is a lad here who has five barley loaves and a couple of dried fish, but what good is that for so many?” Jesus said, “Get the people to recline.” Even though the men numbered about five thousand, there was plenty of grass for them to find a place on the ground. Jesus then took the loaves of bread, gave thanks, and passed them around to those reclining there; he did the same with the dried fish, as much as they wanted. When they had had enough, he told his disciples, “Gather up the crusts that are left over so that nothing will go to waste.” At this, they gathered twelve baskets full of pieces left over by those who had been fed with the five barley loaves. When the people saw the sign he had performed they began to say, “This undoubtedly the Prophet who is to come into the world.”