May 19 The Holy Priest Martyr Patrick, Bishop of Prusa 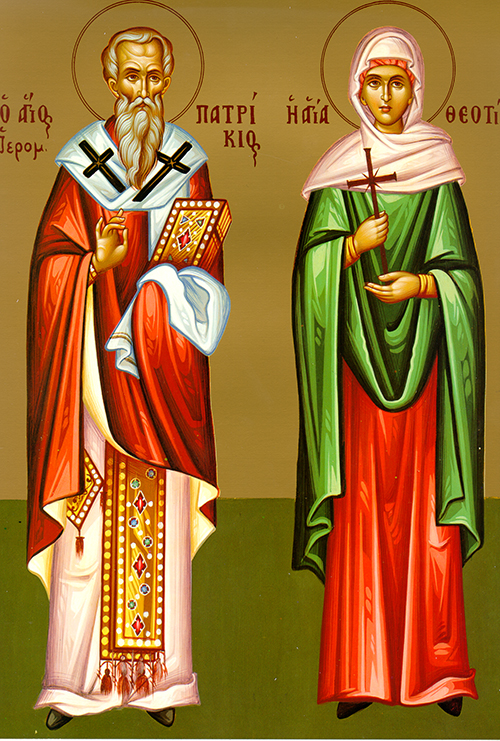 The holy martyr Patrick, Bishop of Prusa, and his companions were martyred during the reign of the emperor Julian the Apostate. Taken to a boiling spring, the governor asked if Christ would save them. Patrick replied, “If he will, he can keep me whole and uninjured, although I would wish, in this water, to be parted from this temporal life that I may live eternally with Christ; but let his holy will be done, without which not a hair of a man’s head can fall.” He was thrown in the spring, but remained unharmed. He was then beheaded with his three presbyters.

O holy priest-martyr Patrick, you lent yourself to the apostles’ way of life and succeeded them on their throne. Inspired by God, you found the way to contemplation through the practice of virtue. Therefore, you became a perfect teacher of the truth, fighting for the faith unto the shedding of your blood. Intercede with Christ our God that He may save our souls.

As a beacon fed by the virtue of the priesthood, you were emblazoned with the blood of martyrdom. Standing before Christ with those who died with you, remember us, O precious martyr Patrick.

In those days, Paul left with Barnabas for Derbe. After they had proclaimed the good news in that town and made numerous disciples, they retracted their steps to Lystra and Iconium first, then to Antioch. They gave their disciples reassurances, and encouraged them to preserve in the faith with this instruction: “We must undergo many trials if we are to enter into the reign of God.” In each church they installed presbyters and, with prayer and fasting, commended them to the Lord in whom they had put their faith.

Then they passed through Pisidia and came to Pamphylia. After preaching the message in Perga, they went down to Attalia. From there they sailed back to Antioch, where they had first been commended to the favor of God for the task they had now completed. On their arrival, they called the congregation together and related all that God had helped them accomplish, and how he opened the door of faith to the Gentiles. Then they spent some time there with the disciples.

Some men came down to Antioch from Judea and began to teach the brothers, “Unless you are circumcised according to Mosaic practice, you cannot be saved.” This created dissension and much controversy between them and Paul and Barnabas. Finally it was decided that Paul, Barnabas, and some others should go up to see the apostles and presbyters in Jerusalem about this question.

The church saw them off and they made their way through Phoenicia and Samaria, telling everyone about the conversion of the Gentiles as they went. Their story caused great joy among the brothers. When they arrived in Jerusalem they were welcomed by that church, as well as by the apostles and the presbyters, to whom they reported all that God has helped them accomplish.

The Lord said to the people coming to him: “I came into this world to divide it, to make the sightless see and the seeing blind.” Some of the Pharisees around him picked this up, saying, “You are not calling us blind, are you?” To which Jesus replied: “If you were blind there would be no sin in that. ‘But we see,’ you say, and your sins remains. Truly I assure you: Whoever does not enter the sheepfold through the gate but climbs in some other way is a thief and a marauder. The one who enters through the gate is shepherd of the sheep; the keeper opens the gate for him. The sheep hear his voice as he calls his own by name and leads them out. When he has brought out those that are his, he walks in front of them, and the sheep follow him because they recognize his voice. They will not follow a stranger; such a one they will flee, because they do not recognize a stranger’s voice.”