May 24 Our Venerable Father Simeon of the Wondrous Mountain 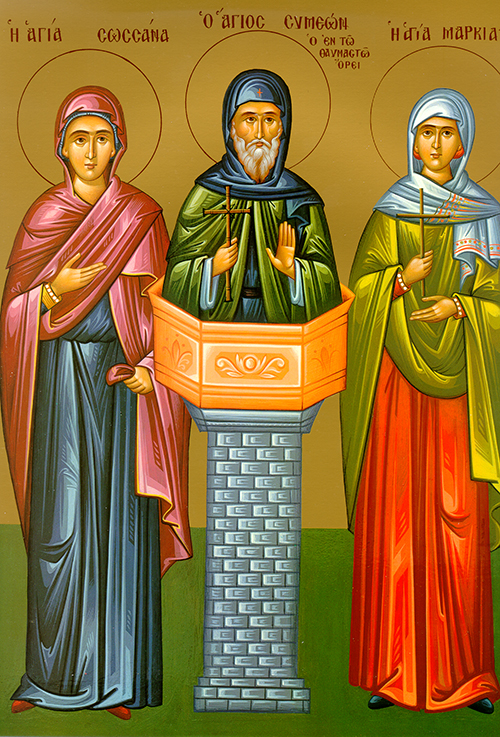 Our venerable father Simeon, of the Wondrous Mountain in Syria, was a priest and anchorite in the 6th century. He lived in conversation with Christ and the angels atop a column for forty–five years and was granted power over the demons and the powers of nature. He is also known as St. Simeon Stylites the Younger.

You made the wilderness your dwelling, O father Simeon, the bearer of God. You became an angel in the flesh and wonderworker. Through fasts, vigils, and prayers, you obtained from God special graces to heal the sick and to sanctify the souls of those who come to you with trust. Glory to the One who gave you strength! Glory to the One who crowned you! Glory to the One who through your intercession grants healing to all.

You turned from the things of earth to search for those of heaven, manifesting your miracles upon the earth. O venerable father, intercede unceasingly with Christ our God for all of us.

In those days, the Athenians led Paul off the Areopagus, saying, “We are curious to know what this new teaching is that you propose. You are introducing subjects unfamiliar to us and we should like to know what it is all about.” (Indeed, all Athenians citizens, as well as the foreigners who live there, love nothing more than to tell about or listen to something new.)

Then Paul stood up in the Areopagus and delivered this address: “Men of Athens, I note that in every aspect you are scrupulously religious. As I walked around looking at your shrines, I even discovered an altar inscribed, ‘To a God Unknown.’ Now, what you are thus worshiping in ignorance I intend to make known to you. For the God who made the world and all that is in it, the Lord of heaven and earth, does not dwell in sanctuaries made by human hands: nor does he receive man’s service as if he were in need of it. Rather, it is he who gives to all life and breath and everything else. From one stock he made every nation of mankind to dwell on the face of the earth. It is he who set limits to their epochs and fixed the boundaries of their regions. They were to seek God, yes to grope for him and perhaps eventually to find him- though he us not really far from anyone of us.’In him we live and move and have our being.’”

At that time the Pharisees called a meeting against Jesus and remarked to one another, “See, there is nothing you can do! The whole world has run after him.”

Among those who had come up to worship at the feast of Passover were some Greeks. They approached Philip, who was from Bethsaida in Galilee, and put this request to him: “Sir, we should like to see Jesus,” Philip went to tell Andrew; Philip and Andrew in turn came to inform Jesus.

Jesus answered them: “The hour has come for the Son of Man to be glorified. I solemnly assure you, unless the grain of wheat falls to the earth and dies, it remains just a grain of wheat. But if it dies, it produces much fruit. The man who loves his life loses it, while the man who hates his life in this world preserves it to life eternal. If anyone would serve me, let him follow me; where I am, there will my servant be. If anyone serves me, him the Father will honor. My soul is troubled now, yet what should I say – Father, save me from this hour? But it was for this that I came to this hour. Father, glorify your name!”

Then a voice came from the sky: “I have glorified it, and will glorify it again.”

When the crowd of bystanders heard the voice, they said it was thunder. Others maintained, “An angel was speaking to him.” Jesus answered, “That voice did not come for my sake, but for yours. Now has judgment come upon this world, now will this world’s prince be driven out, and I – once I am lifted up from the earth – will draw all men to myself.” This statement indicated the sort of death he had to die. The crowd objected to his words: “We have heard it said in the law that the Messiah is to remain forever. How can you claim that the Son of Man must be lifted up? Just who is this ‘Son of Man’?”

Jesus answered: “the light is among you only a little longer. Walk while you still have it or darkness will come over you. The man who walks in the dark does not know where he is going. While you have the light, keep faith in the light; thus you will become sons of light.”