May 25 The Third Finding of the Head of Forerunner and Baptist of Our Lord, John 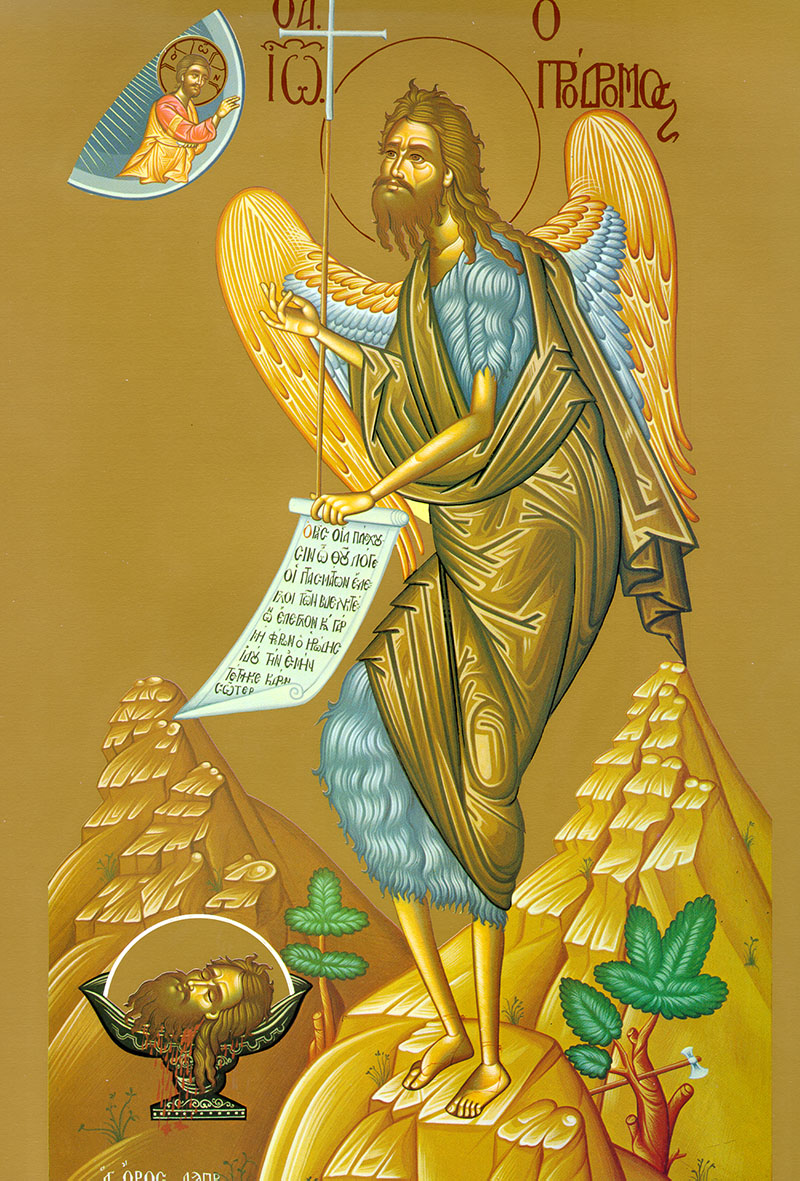 The third discovery of the Venerable Head of the Holy Prophet, Forerunner and Baptist John happened around the year 850. The head of St. John the Forerunner was first found on the Mount of Olives where it had been hidden by Joanna, wife of Chusa, after the saint’s beheading; and found the second time in the city of Emesia during a time of unrest at Constantinople connected with the exile of St. John Chrysostom. It was transferred to Komana during the Saracen raids (about 820) and was hidden in the ground during a period of iconoclast persecution. When the veneration of icons was restored, Patriarch Ignatius (847-857) saw in a vision the place where the head of St. John the Forerunner was hidden. The patriarch communicated this to the emperor, who sent a delegation to Komana. There the head was found a third time. Afterwards, the head was again transferred to Constantinople, and here on May 25 it was placed in a church at the court. Part of the head is on Mt. Athos.

Like a heavenly treasure hidden in a field, Christ revealed your head to us, O prophet. Having gathered together at its discovery, we sing hymns to the Savior who delivers us by your prayers.

O heavenly light and divine pillar in the world, O lampstand of the sun, the lightbearer and divine head of the Forerunner was discovered and revealed to the whole world. It sanctifies those who in faith venerate it and who cry out: O most wise Baptizer of Christ, save all of us.

Brothers and sisters: God, who said, “Let light shine out of darkness,” has shone in our hearts, that we in turn might make known the glory of God shining on the face of Christ. This treasure we possess in earthen vessels to make it clear that its surpassing power comes from God and not from us. We are afflicted in every way possible, but we are not crushed; full of doubts, we never despair. We are persecuted but never abandoned; we are struck down but never destroyed. Continually we carry about in our bodies the dying of Jesus, so that in our bodies the life of Jesus may also be revealed. While we live we are constantly being delivered to death for Jesus’ sake, so that the life of Jesus may be revealed in our mortal flesh. Death is at work in us, but life in you. We have the spirit of faith of which the scripture says, “Because I believed, I spoke out.” We believe and so we speak, knowing that he who raised up the Lord Jesus will raise us up along with Jesus and place both us and you in his presence. Indeed, everything is ordered to your benefit, so that the grace bestowed in abundance may bring greater glory to God because they who give thanks are many.

At that time when John, in prison, heard about the works Christ was performing, he sent a message by his disciples to ask Jesus, “Are you ‘He who is to come’ or do we look for another?” And reply, Jesus said to them: “Go back and report to John what you hear and see: the blind recover their site, cripples walk, lepers are cured, the deaths here, dead men are raised to life, and the poor have the good news preached to them. Blest is the man who finds no stumbling block in me.”

As the messengers set off, Jesus began to speak to the crowds concerning John: “What did you go out to the wasteland to see — a reed swaying in the wind? Tell me, what did you go out to see – someone luxuriously dressed? Remember, those who dress luxuriously are to be found in royal palaces. Why then did you go out — to see a prophet? A prophet indeed, and something more! It is about this man that the Scripture says, ‘I send my messenger ahead of you to prepare your way before you.’

I solemnly assure you, history has not known a man born of woman greater than John the baptizer. Yet the least born into the kingdom of God is greater than he. From John the baptizer‘s time until now the kingdom of God has suffered violence, and the violent take it by force. All the prophets as well as the law spoke prophetically until John. If you are prepared to accept it, he is Elijah, the one who was certain to come. Heed carefully what you hear!”

In those days, Paul landed at Caesarea. He went up and paid his respects to the congregation, and then went down to Antioch.

After spending some time there he set out again, traveling systematically through the Galatian country and Phrygia to reassure all his disciples.

A Jew named Apollos, A native of Alexandria and a man of eloquence, arrived by ship at Ephesus. He was both an authority on scripture and instructed in the new way of the Lord. Apollos was a man full of spiritual fervor. He spoke and taught accurately about Jesus, although he knew only of John’s baptism. He too began to express himself fearlessly in the synagogue. When Priscilla and Aquila heard him, they took him home and explained to him God‘s new way in greater detail. He wanted to go on to Achaia, and so the brothers encouraged him by writing the disciples there to welcome him. When he arrived, he greatly strengthened those who through God‘s favor had become believers. He was vigorous in his public refutation of the Jewish party as he went about establishing from the Scriptures that Jesus is the Messiah.

The Lord said to the people coming to him: “well you have the light, keep faith in the light; that you will become sons of light.” After this utterance Jesus left them and went into hiding.

Despite his many signs performed in their presence, they refused to believe in him. This was to fulfill the word of the prophet Isaiah: “Lord, who has believed what has reached our ears? To whom has the might of the lord been revealed?” The reason they could not believe was that, as Isaiah says elsewhere: “He has blinded their eyes, and numbed their hearts, less they see or comprehend, or have a change of heart — and I should heal them.” Isaiah uttered these words because he had seen Jesus’ glory, and it was of him he spoke.

There were many, even among the Sanhedrin, who believed in him; but they refused to admit it because of the Pharisees, for fear they might be ejected from the synagogue. They preferred to praise men to the glory of God.

Jesus proclaimed aloud: “Whoever puts faith in me believes not so much in me as in him who sent me; and whoever looks on me is seeing him who sent me. I have come to the world as it’s light, to keep anyone who believes in me from remaining in the dark. If anyone hears my words and does not keep them, I am not the one to condemn him, for I did not come to condemn the world but to save it.”